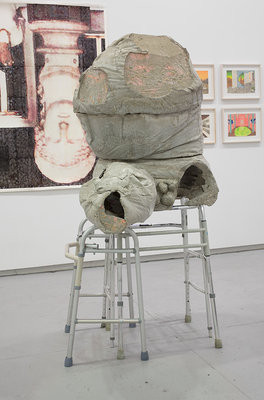 The title of the exhibition, Re: Empire, refers to an article published in Newsweek this past March by Bret Easton Ellis, concerning the rise of a new breed of celebrity. In the article, “Charlie Sheen is Winning,” Ellis divides culture into two categories, the traditional Empire and the new guard - Post-Empire. Post-Empire exists within the system but with knowing disrespect and casual humor that differentiates it from Empire’s solemn self-importance. The works created for Re: Empire use a similar irreverence in their dialogue with art history.

Alex Da Corte’s sculptures are compositions of found and altered objects that are handled with a lurid sensibility akin to a horror-movie. His installations evolve out of an interest in material culture and personal exchanges. Unlike the slick shelving of Haim Steinbach’s sculptures, Da Corte presents his works as gestural Boschian arrangements affixed to the wall, using commonplace methods of display.

Josh Kolbo’s large-scale overlaid prints simultaneously address photography and sculpture. The artist shoots still life compositions that build narratives over space and time. Draped and fragmented images reveal themselves in separate but related works. While Kolbo’s sagging forms initially evoke Robert Morris sculptures, his layered approach to photography forces an investigation of what the viewer expects from a printed image.

Justin Matherly’s sculptures of cast concrete and ambulatory equipment re-imagine classical Greek forms. Matherly’s interpretations exhume these figures while divorcing them from their original significance. The work possesses a vulnerability founded in the fusing of medical walkers with the formative traditions of casting and sculptural material. These uncanny combinations render a critical inquiry into the efforts of art history and into art making in general, while still remaining faithful to its basic requirements. His Untitled (Mask) monoprints of casts create death masks out of sculptures’ ruins.

Dominic Nurre creates site-specific installations that deal with architecture and subjectivity. The minimal wall made for this exhibition perches against a wall in the gallery obstructing the view of the interior from the outside of the gallery. Within the exhibition, the viewer encounters the wall with its openings and divisions that suggest the utility and interactivity of glory holes. Additionally with their selectively punctured surfaces, Reciprocity Skins further the suggestion of environments for couplings.
teamgal.com