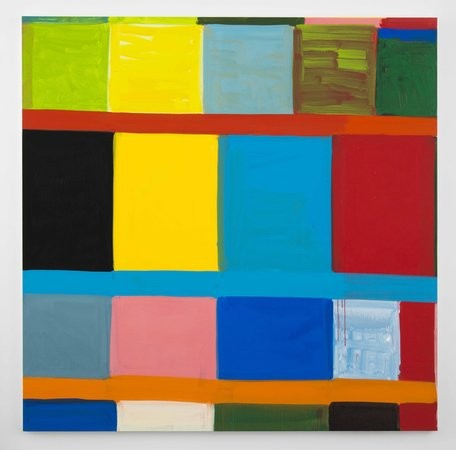 Team Gallery is pleased to present an exhibition of new paintings by the American artist Stanley Whitney. The exhibition, entitled Other Colors I Forget, will run from 11 April through 12 May 2013. Team Gallery is located at 83 Grand Street, cross streets Wooster and Greene. Concurrently, our 47 Wooster Street space will house the exhibition Veterans by the Spanish artist Santiago Sierra.

Stanley Whitney’s paintings are easy to describe, but in between the descriptive terms that one can assign these pictures, lays a very expansive field. For how can Whitney’s paintings be gorgeous and difficult? How do they manage to appear both simple and complicated? How do his paintings arrive stuffed full of chaos and order; of ease and struggle? Whitney’s pictures not only pulse optically, they also throb with tensions that arise from their conceptual dichotomies.

Whitney’s latest exhibition takes its title from a six-foot square painting included in this hanging. Other Colors I Forget, composed in the artist’s signature style of loosely gridded squares of color, contrasts sanguine reds and brilliant yellows, with wintry teals jostling against muted shades of pink and olive. The colors burst at their edges, overlapping as they compete for the viewer’s singular attention. Whitney considers colors the way we might consider individuals, employing their expressive character, their moods, peculiarities and their significance at particular moments in time. In Whitney’s paintings, colors operate musically, containing within themselves the ability to bring out emotions and to truly touch an audience.

Other Colors I Forget foregrounds the two primary concerns of the veteran artist’s painting practice – color and structure. The standard square support and architectonic form provide a heightened sense of rhythm in the paintings as a series. Within a set of strict formal constraints, Whitney interweaves opaque and transparent layers of oil paint. Alongside solid blocks of color are moments where Whitney allows a hint of the history of the specific painting to peak from beneath an obscuring layer. These moments, suggesting both immediacy and hesitation, reveal the layered intimacies of the artist’s process of decision-making. Though resisting narrative, Whitney uses the medium of paint to address personal interests and subject matter. A voracious reader and devoted music listener, often a literary passage or musical phrase will inform a new body of work. The paintings reveal personal fascinations with figures such as Whitman, Miles Davis and James Brown, as well as Mondrian, Morandi, Goya and Guston.

Each painting exists as a clear statement, a unique apparatus which bridges the rich history and vast potential of painting as a medium with Whitney’s personal desires. In spite of his own title’s admission of the limits of memory, the seeming fullness of Whitney’s vision begs the question – what could possibly have been omitted? Playful yet never cloying, the exuberant colors of Whitney’s canvases belie a sensitive touch and an emotional depth acquired over the course of a decades-long career.

Whitney was born in 1946 and has been exhibiting his work since 1970. His work has been shown at museums including the American Academy of Art and Letters, New York; the Institute of Contemporary Art, Philadelphia; the Nelson-Atkins Museum of Art, Kansas City; the Orange County Museum of Art, Newport Beach; and the Studio Museum in Harlem, New York. In Europe, solo gallery exhibitions have been mounted in such cities as Berlin, Brussels, Vienna and Rome.

This is the artist’s third solo exhibition at Team Gallery.
teamgal.com