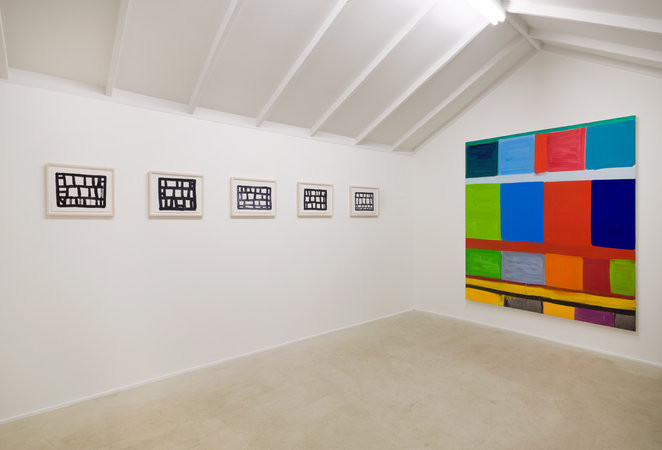 For his debut Los Angeles exhibition, Stanley Whitney presents a body of brand new paintings employing his decades-old compositional approach: gridded squares of pigment, divided by thin horizontal lines. By allowing color to provide structure, Whitney erases the partition between these two essential components of the medium. While the works are characterized by their improvisational nature, they are wrought with a discernable logic – the artist’s understanding of color is as studied as it is preternatural.

Whitney’s works are concerned with volume more so than with mark-making or texturality. The systemic paintings are enlivened by the coloristic connectivity between individual squares: every itinerant shade recurs repeatedly as the eye moves up and down, left to right, appearing each time new, metamorphosed by its neighbors. Never static or redundant, the blocks are endlessly ambulatory, charging the whole with a seemingly infinite density.

The otherworldly specificity of Whitney’s pigments comes from variations in layering, transparency and opacity – no color can be taken at face value. Despite their strict, almost mechanical framework, the paintings are defined by a distinct humanity and freedom.

Whitney was born in 1946 and has been exhibiting his work since 1970. His work has been shown at museums including the American Academy of Art and Letters, New York; the Institute of Contemporary Art, Philadelphia; the Nelson-Atkins Museum of Art, Kansas City; the Orange County Museum of Art, Newport Beach; and the Studio Museum in Harlem, New York. In Europe, solo gallery exhibitions have been mounted in such cities as Berlin, Brussels, Vienna and Rome.

This is the artist’s fourth solo show with the gallery.
teamgal.com