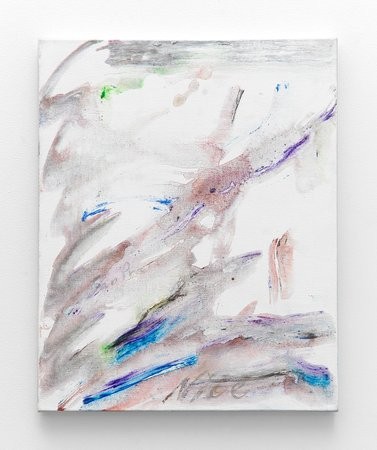 Tam Ochiai will present a group of paintings that contend with the idea of travel in both its literal and metaphorical configuration. Entitled Everyone Has Two Places, the works in this series employ a premise that initially seems suspiciously oblique: the names of two cities painted on formally divergent canvases. Our understanding of each painting is alternately affirmed or radically altered by the individual parenthetical titles that accompany them, some of which include the names of dead writers, artists, actors and musicians both historical – as in T.S. Eliot (London, St. Louis) – and fictitious – Humbert Humbert (Paris, Parkington). Further investigation reveals that some of these paintings contain the birth and death cities of their subjects, bookends that not only chart the movement of the body but likewise bracket the volume of a life’s work. Others are more mysterious in their text-sources, often taking their two locations from details of Ochiai’s own life – such as the start and endpoints of a transnational train trip. By proposing that the movement between two places can function as index – both geographical and temporal – these paintings trigger a steady avalanche of connotations both shared and deeply personal.

The modest scale of these skeletal biographies speak directly to the ways in which they evoke various commonplace cultural ephemera, such as novels, album covers, maps, notebooks and magazines. Though stylistically fluid and moving freely between references to art-historical movements, graphic design and drawing, the works are unified by their commitment to the relationship between literal and metaphysical mark-making. Ochiai’s gestures, be they engraved on a thick bed of impasto oil or applied directly to a bare canvas, act as physical manifestations of his concern for the traces we leave.

Ochiai’s work is frequently oriented around the concept that we maintain the capacity to find traces of ourselves within the unfamiliar and that these traces, however faint, connect us to places that are both remote and known. In past work, Ochiai has examined this idea of the peripatetic trace in literal ways: the scratch of a cat’s claw on the surface of a sculpture, a travelogue of restaurants serving ethnic cuisine in unexpected places, a group of paintings based on calendars that list national holidays. These poetic pieces use a persistent conceptual framework to examine the inexorable connection between creative output and a life lived, as well as the space that exists between an artist and his work.

Tam Ochiai was born in Yokohama and lives and works in New York, while traveling frequently to Paris and Tokyo. Ochiai has been represented by Team Gallery (New York) and Tomio Koyama (Tokyo) since they both opened eighteen years ago. He has also participated in both gallery and museum shows in London, Basel, Salzburg, Berlin, Milan, Amsterdam, México City, Copenhagen, Osaka, Dijon and Brussels.
teamgal.com