Part of the 'Mondrian to Dutch Design' year 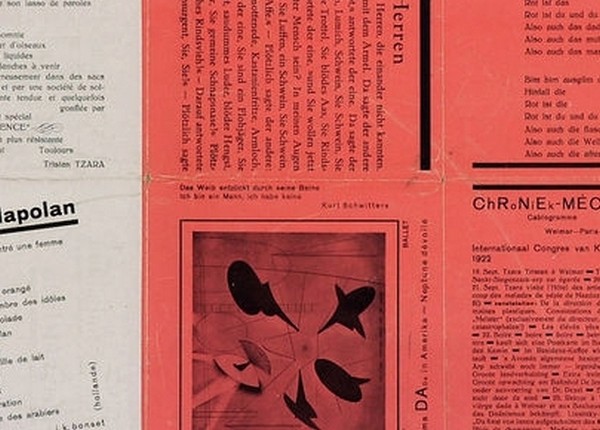 In 1917 Theo van Doesburg founded the periodical De Stijl in order to reflect the ideas of that Dutch art movement. In 1920 he adopted the pseudonym I.K. Bonset. Under that name he published images in word and sound. He was inspired, amongst others, by Dadaist and Futurist poets who were also experimenting with word and sound. Painters such as the Italian Tommaso Marinetti and the Frenchman Stephane Mallarmé, as well as his friendship with Anthony Kok, a poet from Tilburg, all had an influence.

There is a fine line between the experiments of De Stijl and those of the Dutch writer and poet Paul van Ostaijen (which was critisized in the periodical De Stijl in 1921) and so-called Concrete or Visual poetry which is concerned less with the timbre of the sound, and more with the visual image.

OPENING HOURS
The exhibition takes place in the library, which is opened from Tuesday until Friday from 11.00 am to 5.00 pm. Access weekends: ask at the cash register or information desk. Entrance to the library is free.

2017: THE MONDRIAN TO DUTCH DESIGN THEME YEAR
In 2017, it will be the 100th anniversary of the foundation of the Dutch artistic movement called ‘De Stijl’ (The Style). Established in 1917 in the Netherlands with founding members Piet Mondrian (born Mondriaan) and Theo van Doesburg, it was originally a magazine, which published Mondrian’s theories on art but it grew into a wider art movement that widely influenced modern architecture, design and fashion. Over the past 25 years, the desire to modernise design and art that characterised De Stijl has been carried forward under the banner of Dutch Design.
To celebrate the anniversarye, NBTC Holland Marketing, together with its partners, has declared 2017 as the Mondriaan to Dutch Design theme year. Van Abbe and De Stijl is part of the programme in Brabant.
www.vanabbemuseum.nl