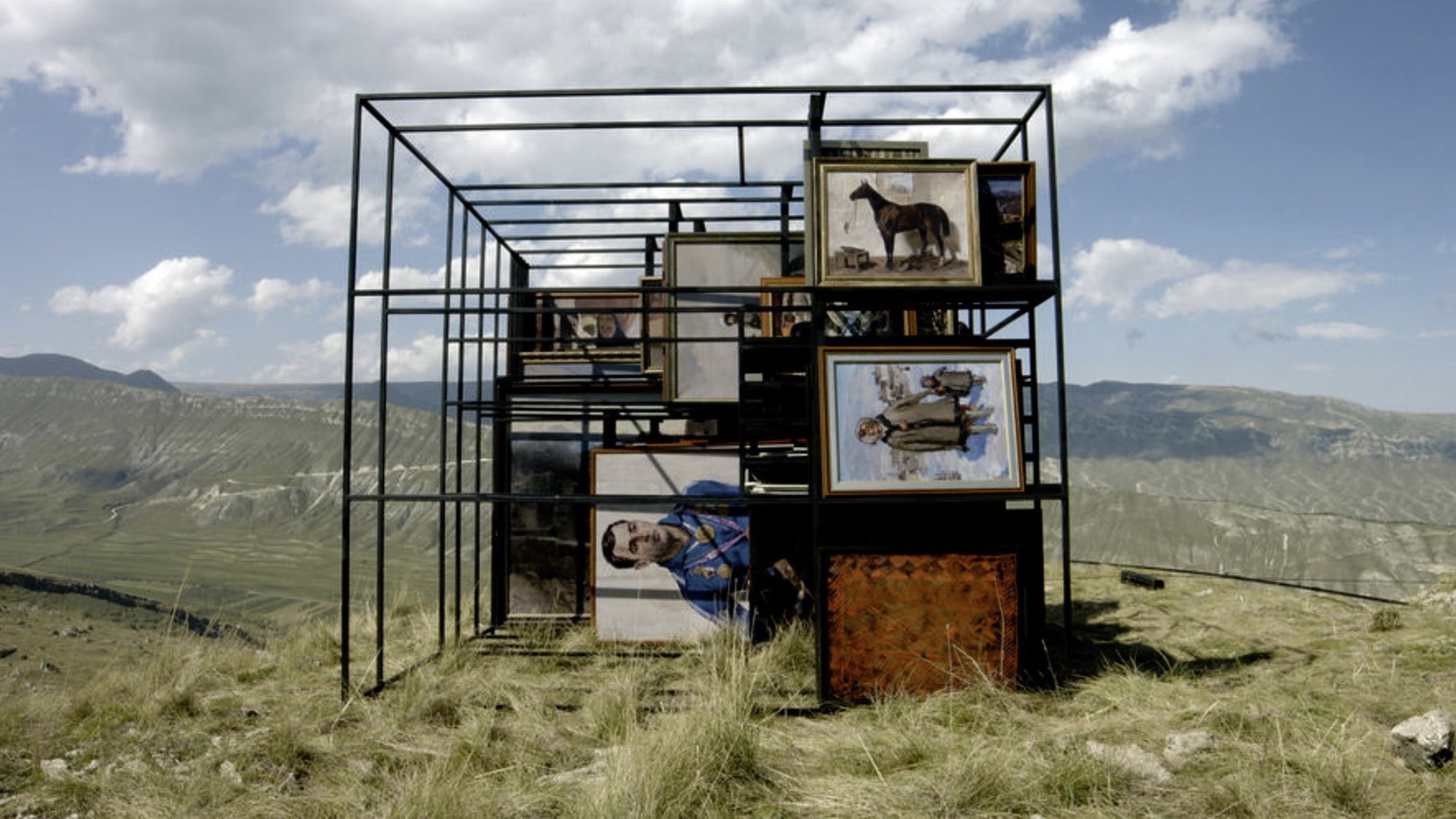 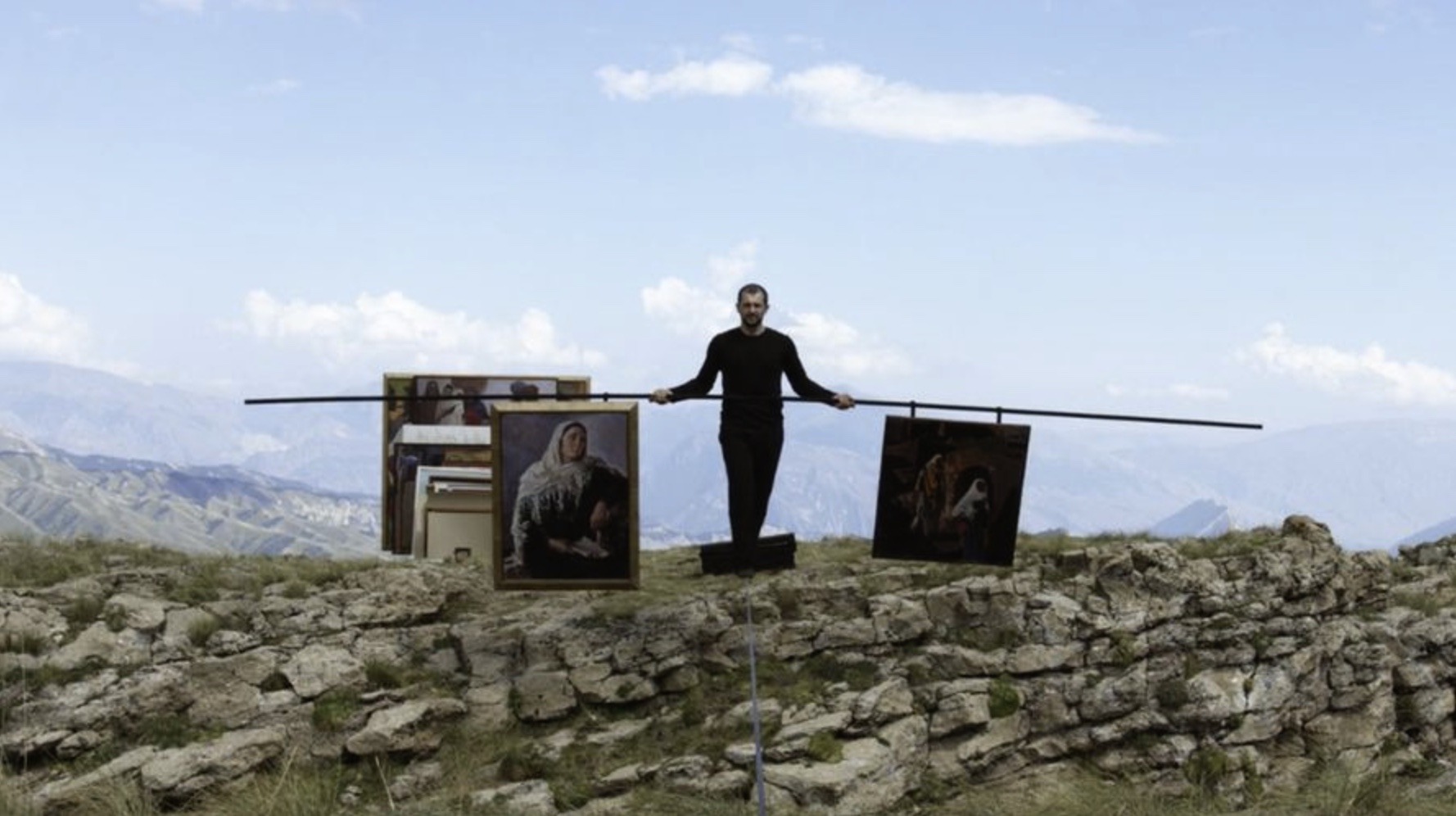 Taus Makhacheva examines the importance of art and culture during times of great change. She is interested in the way in which different cultures and traditions interact. She questions the prevailing views of art and culture in a critical, but at the same time, humorous way. In the Storeroom exhibition the artworks of the Dagestan Museum of Fine Arts named after P.S. Gamzatova have central place: she had 68 artworks from the museum’s collection copied to use them in a number of performances. The best known is the video Tightrope (2015) in which Rasul Abakarov, a representative of the fifth generation of a family of tightrope dancers carries the artworks from the impressive Caucasian highlands across a ravine from one mountain top to another, risking his own life.

The Van Abbemuseum bought the artwork together with the M HKA in Antwerp: Storeroom is a temporary home for the collection and the stories which Makhacheva created around the works. For example, there is the story of Maria Korkmasova and Khamisat Abdulaeva, two employees at the Dagestan Museum of Fine Arts named after P.S. Gamzatova, who prevented the theft of a painting by Alexander Rodchenko. In the video Super Taus (Untitled 2) 2016 Makhacheva’s alter ego “Super Taus” goes in search of a suitable place for her monument to this brave woman in an institute or a public space. By connecting the stories with elements from the rich Russian and Caucasian circus tradition, she imbues them with new energy and significance.

There will be a performance on Saturday 24 November, followed by a discussion with Taus Makhacheva and her guest, Rasul Abakarov, the tightrope dancer and brave protagonist in the Tightrope video. More information will soon become available about this.

Taus Makhacheva (born 1983, Moscow, Russia) lives and works in Makhachkala (Dagestan) and Moscow. She graduated in 2007 with a BA in Fine Art from Goldsmiths, London and gained her MFA from the Royal College of Art, London in 2013. Her work has been exhibited in the Liverpool Biennale, Manifesta, the Riga Biennale in 2018, the Venice Biennale in 2017, the Shanghai Biennale in 2016, the Moscow Biennale in both 2015 and 2011; the Kiev Biennale in 2015; the Sharjah Biennale in 2013. Makhacheva was awarded the "Future of Europe" prize, from the Museum of Contemporary Art, Leipzig, 2014 and the "New Generation - Innovation" prize for contemporary art in 2012.Curator: Christiane Berndes

Taus Makhacheva is an artist with stories to tell. In the Storeroom project, the subjects or passive objects are 68 copies of works of art from the Dagestan Museum of Fine Arts named after P.S. Gamzatova. Makhacheva creates unusual combinations in order to bring the works to life, raising questions about the role of art, traditions, identity and culture. For instance, the stunning Tightrope video, set in the breathtaking highlands of the Caucasus, shows how Rasul Abakarov, the fifth-generation representative of a family of tightrope-walkers, risks his life to carry the works of art across an abyss from one mountain top to another.

The 68 copies of works from the museum in Dagestan, together with the different stories Makhacheva uses them to tell, have now been assembled in one of the museum rooms, allowing you, the visitor, to step into another world; a world where Dagestan, the Russian circus and Super Taus convene.

On Saturday 24 November you will be able to experience Storeroom through a performance and an artist talk by Taus Makhacheva accompanied by Rasul Abakarov. Taus Makhacheva designed this performance especially for this exhibition at the Van Abbemuseum. The copies are brought to life using role play and dialogue. New stories about the works from Dagestan Museum of Fine Arts will be created in Makhacheva’s unique style.

As part of the Storeroom exhibition, Russian artist Rasul Abakarov will walk the tight rope in the museum on Sunday afternoon. Abakarov is a tightrope walker in the fifth generation, born in 1986 in Leningrad. The Russian traditional circus is very different from the more Western theatre circus as we know it. By telling his personal stories and showing his skills on the tight rope, he lets you take a glimpse of this world of family traditions and cultural heritage.

After the performance some visitors will get the chance to balance on the tight rope themselves! This performance with a small workshop element is accessible for everyone from 8 years old.

About Rasul Abakarov
Graduated from Saint Petersburg University of Culture and Arts. Started his creative activity in 1999. While working, travelled both around Russia and abroad. The first trip was with his father to Turkey. Then he began to tour four different countries a year. He visited Dubai, Germany, Kuwait, Sweden, Spain, Taiwan, Qatar, China, Japan, Italy, Syria, Greece, Belgium, etc. 'I am already the fifth generation of tightrope walkers in the family. But these are the ones I know for sure about, there might have been more. According to the family history, my ancestors performed at weddings and other celebrations, usually travelling around Central Asia. Right before the Second World War four young friends from the Tzovkra village had gotten into the Kiev circus. Unfortunately, two of them died at the front during the war. The other two, Yaraga Hajikurbanov and Rabadan Abakarov, survived. They both started great circus dynasties. All my relatives - uncles, great-grandfathers - all walked the tightrope. They performed in circuses around the world. My grandfather came to the Leningrad music hall in 1969. My father worked at the same place for 20 years. I was born and raised in St. Petersburg. I also worked for several years at the music hall, as well as at the circus and at the theater, but now I'm an independent artist and perform wherever they ask me to.’
www.vanabbemuseum.nl