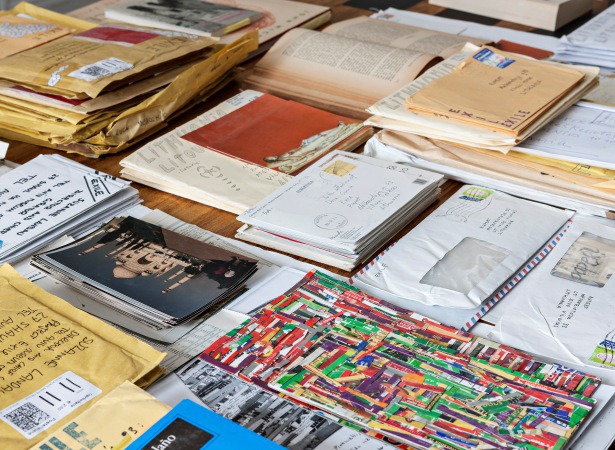 At Witte de With, we have received some trailblazing letters as of late. Noted are missives that go from critiques of our institution’s name to suggestions for why and how we ought to be more inclusive or hospitable. We also receive letters stating how this or that project we’ve done has been influential. Indeed, in most art institutions, epistolary exchanges are part of the work culture. And this is likely to happen more often at institutions that engage people from different parts of the world, not solely from its immediate surroundings. Within this scenario, a time difference is accounted for in one instance or other, even within the most basic of epistolary exchanges. However objectively or subjectively it is experienced, and regardless of whether it is framed as a historical, chronological or technical measure, time is pointed, expressed, felt.

No less, these exchanges tend to draw on cultural or geographical divides between correspondents. In this kind of epistolarity, explanation of a spatial-temporal context seems compulsory, more than simply necessary. Consequently, an epistolary underlying expression “of the times” is articulated not only in a given latency or immediacy between sending and receiving dispatches—which, since the emergence of postal service has significantly shortened and changed in form due to communication technology—but also within and even between the very lines of a missive. The kind of epistolarity considered here lies beyond the bureaucracy a project entails and its associated correspondence; it also stands apart from mail art that centers, in principle, on using, and simultaneously exposing, the means and channels of distribution at hand.

Taking this into account, this group exhibition explores the ways in which visual artists are reflecting on the history and present articulations of the epistolary form. The selection of works considers key characteristics of early examples of epistolary writing, namely, the ways in which there was an unclear distinction made between a letter’s status as reality or fiction, because, in their time of publication, these appeared to be a compilation of private documents that were seemingly found or inexplicably sourced; and how the epistolary can be seen to expounds on cultural differences between people and places, in its form as correspondence between lovers separated by class or war, or both, dispatches from a fortunate traveler, or letters from a soldier, an exile, an immigrant or someone they left behind. Being or feeling in captivity, and the urge or desire to be rescued, loved or simply understood is thus central in epistolarity.

While letter writing has aimed to shorten distances between people, missives also mark the gaps that separate them apart, even if and when articulating beliefs and emotions through correspondence may be intended to bring people closer, or to come to terms with one another. Testimony, confession, anecdote; these forms of interiority, exteriority, and super-structures that describe a personal, and likewise present a grammar of a present-tense, are, at best, expressed in a literal and visual semiotic of a missive, however brief or developed an exchange may be.

This exhibition includes seven art installations that in different ways explore epistolarity, each micro-politically pointing to a different technology and social context. As part of the exhibition is a custom-made wallpaper, designed in-house and installed sparsely throughout the gallery space. Including images that range from seventeenth-century paintings to contemporary films, it intends to make visually palpable something along the lines of an epistolary visual culture. Additionally, a series of programs and live-events on epistolarity have been organized in parallel to the exhibition. This is considered another form of address, instances where and when artistic projects and curatorial research is publicly shared and experienced. Relatedly is the exhibition’s publication: a letter commissioned to the poet and editor Quinn Latimer, which will be distributed midway through the exhibition period through postal service. If you would like to receive it, please sign up to the mailing list.
www.wdw.nl