The Nude And The Sap 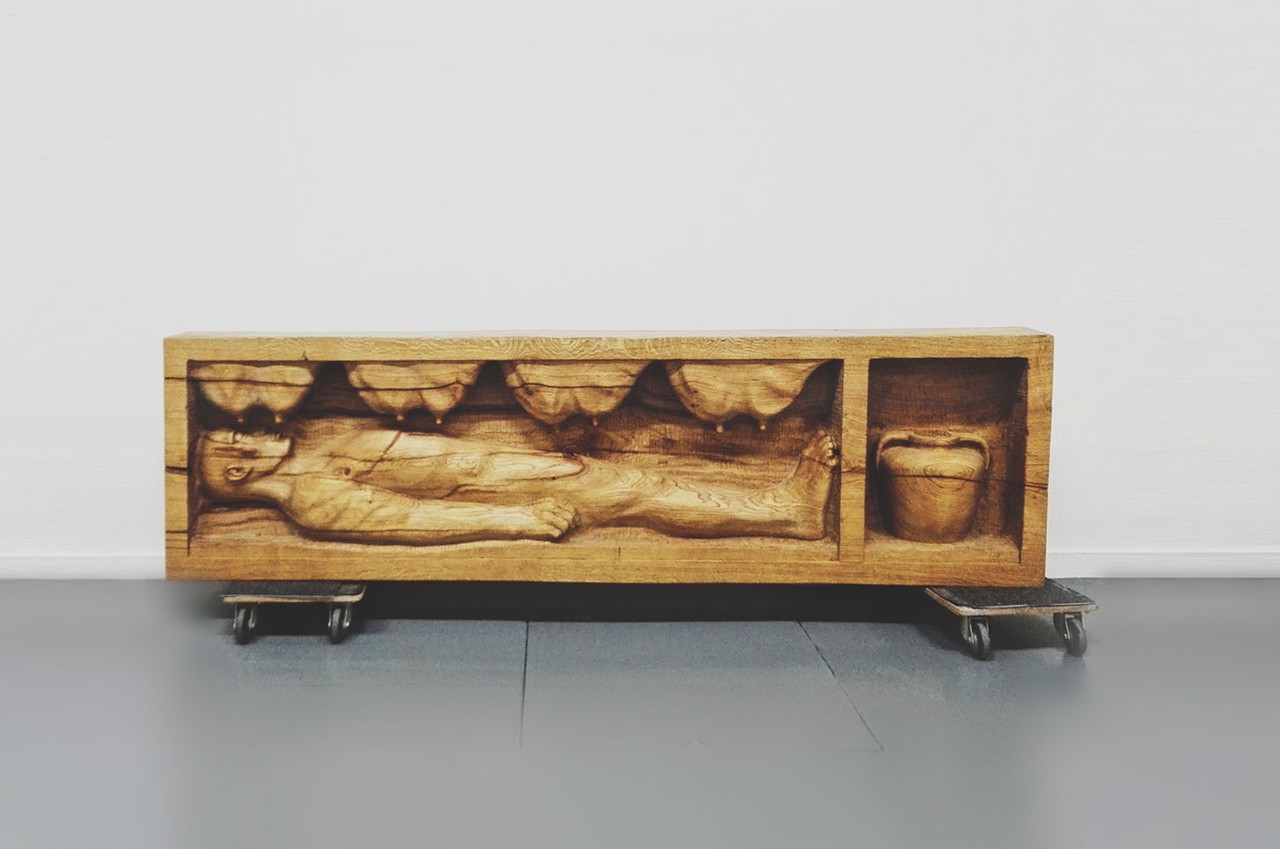 Let intelligence and body come together, let them understand one another, by means of the matter of my art! The stones and the powers, the profiles and the masses, the lights and the shadows, the artificial groupings, the illusions of perspective, and the reality of weight, these are the objects of their commerce of which the profit shall finally be this incorruptible richness I call Perfection.
– Eupalinos by word of Phaedrus, Eupalinos, or the Architect, Paul Valéry

The text Eupalinos, or the Architect by French poet Paul Valéry, commissioned as an introduction to the first edition of the review Architectures (1921), runs in parallel to Daniel Dewar and Grégory Gicquel’s THE NUDE AND THE SAP, an exhibition gathering existing and new works by the artist duo. Throughout the works on view runs an interest in the fluids (water, urine, sap, oil) that emerge from the materials used and the bodies that have had a hand in their shaping. Recurrent motifs such as vessels and containers –a vase, a pipe, a dresser– address the notion of negative space as a constructive element to all sculpture and pictorial surfaces.
Valéry’s fictive text plays out a conversation between Socrates and Phaedrus on the potential of immersive architecture and finished form, most especially the idea that through construction the maker and the object being made are indivisible; almost a phantom limb. Phaedrus speaks to Socrates in the afterlife, where the philosopher resides as a mind without a body. In this spiritual realm, they discuss the need for ideas to take on form and thus, potentially, embody beauty. In both architecture and sculpture, issues of sustainability and eternity inevitably arise, thus forcing us to take into consideration the means and processes of production. “There are no details in the execution,” the fictive (?) architect Eupalinos says, meaning that detail is precisely everything when creation is concerned. Mind and body meet in the act of making, defining the work as the “indissoluble knot of the difference between intelligence and body.”

Emphasizing the dialogic in creation and critique – a process inherent to the artist duo’s own sculptural practice – the text could be read as a manifesto of the pair’s sculptural process. Much like the architecture Valéry’s protagonists speak of is mirrored in the architecture of the text itself –a poiesis at work, a building that operates through thinking, speaking, and writing–, Dewar and Gicquel’s sculptures and murals embody their own making, oscillating between perfection and imperfection. The surrealist André Breton is known to have mockingly altered Valéry’s texts by replacing a given word by its opposite, revealing the supposed equivocal nature of the poet’s writing. For THE NUDE AND THE SAP, Dewar and Gicquel have undertaken a similar irreverent approach, replacing the word architecture with sculpture. The artists continuously dissect and reconstruct the medium of sculpture through their iconoclastic practice. With great wit and a bold visual language they traverse the aesthetic registers of sixteenth century pastoral and "brutalist rustic", to create a series of sculptures that explore the tensions and interrelations between nature and culture, material and form, animal and human.

THE NUDE AND THE SAP is presented as part of Para | Fictions, a cycle of sustained investigations taking as its focus the relationship between literature and visual art through the practice of ten artists; Daniel Dewar & Grégory Gicquel, Calla Henkel & Max Pitegoff, Mark Geffriaud, Laure Prouvost, Oscar Santillan, Dineo Seshee Bopape, Lucy Skaer and Rayyane Tabet. Each project on display presents a different artistic methodology, constituting a combination of each artist's visual interests and literary underpinnings, to seek the viability of repositioning ‘reference’ as ‘form’, ‘translation’ as ‘co-authorship’.
www.wdw.nl