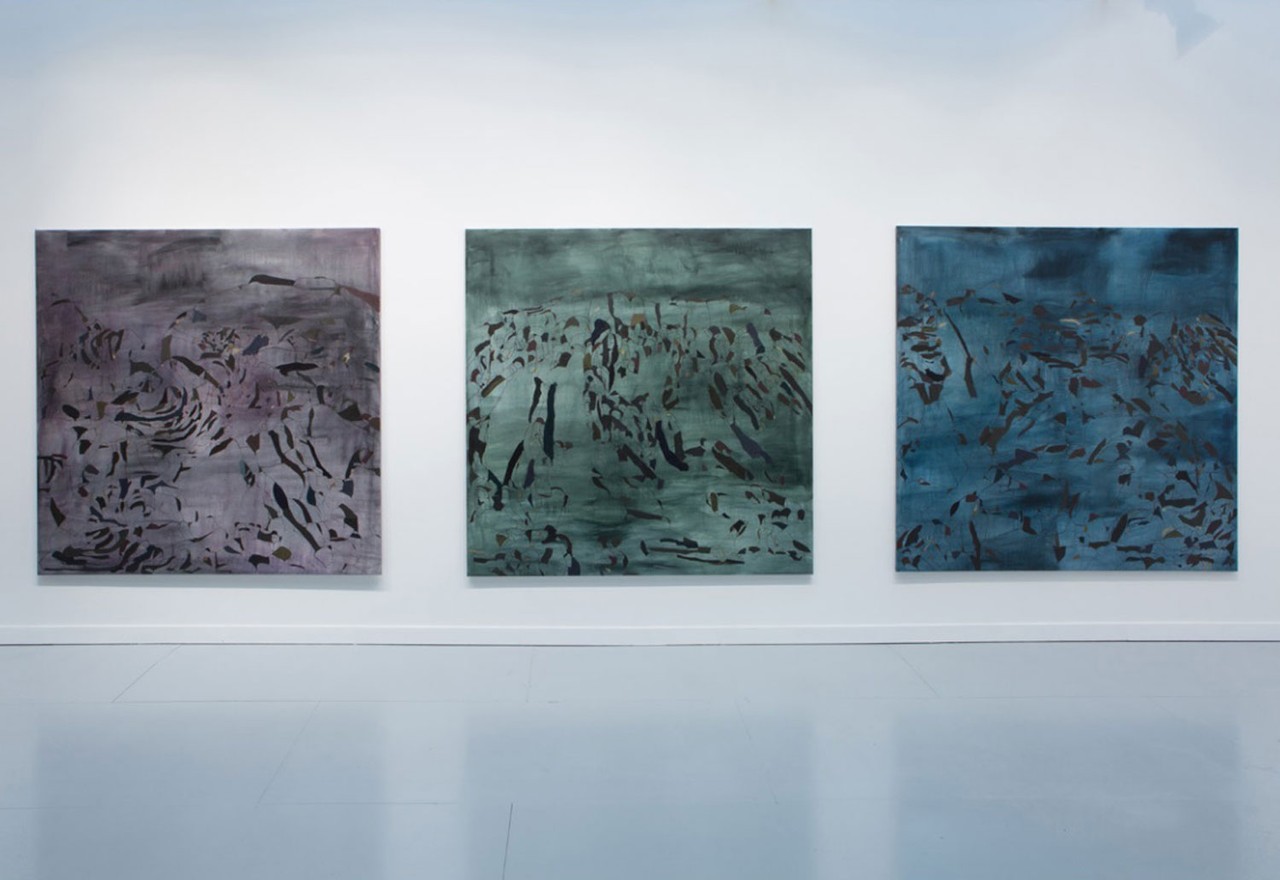 Irene Kopelman, a solo exhibition presents a selection of artworks from four different projects created by the artist between 2012 and 2016. Each of these projects was made during, or after, Kopelman engaged in fieldwork, travelling to comprehend and, ultimately, to render these environments. For nearly two decades, Kopelman analyzes with scientific rigor the landscapes and ecosystems of remote places, or, at least, sites that are not easily accessible, from the volcanic islands of Hawaii in the Pacific to the mountainous heartland of Borneo in Asia to the Peruvian rainforest in South America. At each location, she develops a specific method of observation.

Working on-site and spending significant time with her objects of study, whether these are tree lines or the colors of earth, Kopelman creates a system of representation that becomes the basis of her painterly work. She does this, first, through drawings and travelogues made during her expeditions, which later become the basis for this Argentinian artist’s studio-based practice in Amsterdam. Through these different stages of removal, or of distance from an original site of study, and through the inflections made by intuition, the artist represents interpretations of environmental phenomena. Her work is less a matter of document than an occasion to welcome sensuous imagery as imaginations of place.

The four large-scale paintings from her Tree Lines series capture the effect of avalanches on the mountainous landscape of the Swiss Alps. Also on display is one of her color-index works titled Sampling Greens. It was created after a scientific expedition that Kopelman was part of, and which was organized to sample animals and plants on Mount Kinabalu in Borneo, located in Eastern Malaysia. The results provided important information to conservation agencies concerned with the unique biodiversity of what is considered the Heart of Borneo—at only 1.5 million years old, a young region in geological terms. Kopelman’s objective during this expedition to Asia was to grasp the vast variations of greens in the jungle. Sampling Greens strikes a dialogue with Forest Windows, which is included in the exhibition and which was done after Kopelman undertook fieldwork in the Reserva Territorial Madre de Dios in Peru. A combination of drawings made on-site and of watercolors created after fieldtrips, manifest her feeling that “you don’t feel you are in a landscape, but rather surrounded by a continuum of elements.” At every stop during her expedition in the Peruvian jungle, Kopelman would sit and draw a section of the dense forest by establishing a perimeter of observation, an imagined window frame delineating the field she would draw.

She established a different method during and after her travels to study the dense yet dried and fractured lava landscapes of Hawaii, where she has been twice to date. Hawaii’s volcanic landscapes are represented in a massive sculpture and a series of paintings showcased in the exhibition, which are made after a rigorous study and indexing of black hues drawn from the island’s earth.

Whereas in past centuries, artists participated in scientific expeditions to map and picture landscapes that were (or aimed to be) colonized, Kopelman takes up the role—as a woman artist, a rare case given the historic gendered taboos existing for such a task—to manifest the places of intuition and subjectivity in representation, whether it be scientific or otherwise. Through her practice, which entails and ultimately depends on collaboration with experts in the territories she comes to investigate and visit, Kopelman’s work is also able to contribute to documenting, and hopefully lessening, the effects of global warming. A combination of aesthetic venture and scientific exploration, the work of Kopelman pictures the role visual arts has in making palpable conditions of our day.