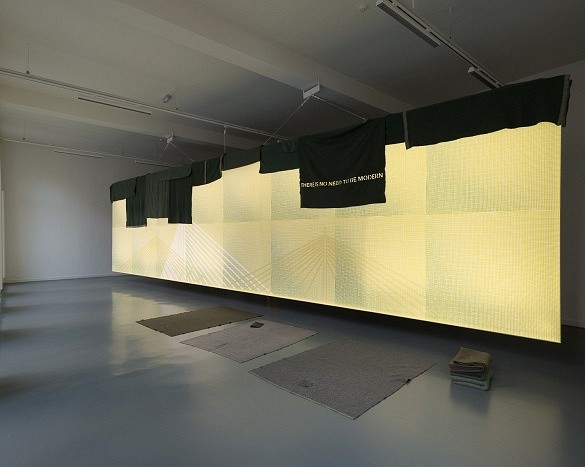 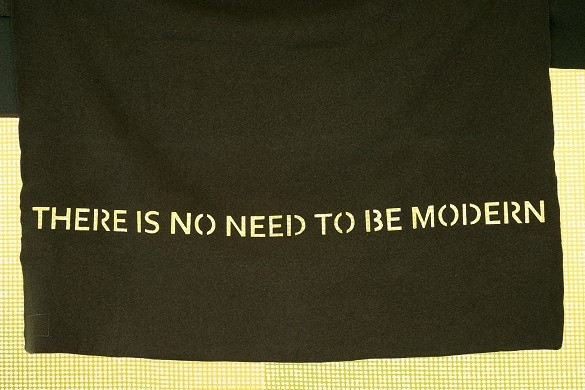 The first iteration of In Light Of 25 Years is presented by artist collective Mahony (Stephan Kobatsch, Jenny Wolka and Clemens Leuschner). Their work Safe Harbour was prompted by the interview published in A Life Full Of Holes. The Strait Project, the publication accompanying French-Moroccan artist Yto Barrada’s eponymous solo exhibition at Witte de With in 2004. In this interview, Barrada discussed her work in photographing the Strait of Gibraltar and the impact it has on the lives of young people in Morocco as a geopolitical site of frustrated proximity, as she calls it.

As a response, Mahony uses the light box as both an image case and a sculptural element, and addresses related contemporary issues and historical events, such as the harrowing circumstances of refugees caught during European border controls in the Mediterranean, or The Truth about the Colonies, an exhibition organized by the French Communist Party and a group of surrealist artists in response to the controversial Colonial Exhibition (1931, Paris), where both objects and people from French held territories were exhibited.

The light box is partly covered with rescue blankets often seen in press photography of humanitarian or military operations. Some of these blankets carry embroidered attributes or emblems one would find on towels of private clubs or beach resorts. The embroideries depict ancient Greek gods, whose names have been used for various military missions to secure the European sea borders. One blanket carries the words “there is no need to be modern,” questioning the dominant position of Western modernism worldwide. The street-side of the light box carries a yellow pattern that could be associated with nets, grids, fabrics, and maps. Embedded in the grid are outlines of the fictitious modern bridge similar to the one shown on the €500 note. The combination of the grid and the bridge evoke a tension between confinement and movement, between entanglement and progress.

Interview
Samuel Saelemakers: What were your initial thoughts about the light box as a fixed display format?

Mahony: To work with a fixed and defined format like this light box is a bit different to the way we usually work, where we decide on the appearance of the piece according to the content-related questions that arise in the process. But it is interesting to think about this object and the limitations or determinations it implicates, in the same way that we would think about the exhibition space. Here we had to develop a new piece in a relatively short amount of time, but as we had been working on a specific topic for a while already, it was obvious that it would fit into a series of works. Very soon we decided that the light box would be part of an installation, because apart from providing two surfaces for images, it is also an object dividing the space.

What are the risks and advantages of archive based working methods?

Using an archive gives the possibility to go deeper into a topic, but of course it ́s not about merely showing the collected material, as a form of documentary or reproduction, but to use certain elements to create something new and autonomous.

What drew you to Yto Barrada’s work?

We were looking at the artists who showed at Witte de With in the past years, and came across Yto Barrada and then we were sent the exhibition catalogue, where we read the interviewbetween Barrada and the philosopher Nadia Tazi. We encountered several ideas that we could relate to, such as migration and movement or the idea of visibility and invisibility, which you could also find in her work.

Yto Barrada ́s work concentrates on a concrete space and a specific social reality that is produced for those people living next to the Strait of Gibraltar, and how the constant notion of waiting in front of what she called a “cosmic backdrop” could affect the daily life and the self-perception. The space we are having in mind is not one concrete space, because border space is not only a geographical space, but becomes quite ubiquitous while being reinforced by political discourse, media, a security apparatus and social realities.

In your other projects you have a similar approach, where you find and define a topic but then work around it, more than actually show it up front.

There is something about being too direct, or merely showing “facts” that makes us draw back. First of all it is problematic to define the so-called “facts” anyway, but being too concrete without leaving any intermediate space for the observer,could create the effect of dealing with something very quickly, without even starting to process the just perceived information. We think a lot about the possible dynamics that a work could take on and the communicative potential it could bear. So where do you leave doors open and where do you choose to be more concrete and precise?

How do the anti-colonial poster from the 1930s and the € 500 bank bill symbols relate to each other?

They relate to each other in the context of all the other elements, such as the military rescue blankets, the metal book and the embroidery of Greek gods on some of the blankets. We often arrange a group of object or images in relation to each other, whose particular aspects jointly are telling one or multiple stories.

We found the poster of the counter-exhibition to the 1931 Paris Colonial Exhibition entitledThe Truth about the Colonies. The six-month colonial exhibition attempted to display France ́s colonial possessions and demonstrate the economic success; it was a celebration of the French colonization. The French government also brought people from the colonies to Paris, to create native arts and crafts and to perform in reproductions of their huts or temples. The small counter-exhibition was organized by the Communist Party in alliance with the Surrealists and other anti-colonial groups and was held in a Parisian annex of the Maison des Sydicats. Compared to some 33 million visitors that came from around the world to see the Paris Colonial Exhibition, the counter-exhibition attracted only 5000 visitors in 8 months.

It ́s all about positioning; the position of the poster on the black wall and also a possible artistic and political position.

The borders of todays Europe are represented in various ways, also, for example in the currency, the Euro. We took a closer look at the banknotes and realized that on their back they all show a fictitious bridge in the style of one particular architectural period. Since modernity is represented on the 500 Euro bill, we chose to reproduce this bridge like a kind of watermark on the other side of the lightbox. On one of the blankets that is hung over the box one could read the cut out sentence “There is no need to be modern” by Walter D. Mignolo, which refers to modernity not as an ontological unfolding of history, but the hegemonic narrative of Western civilization.

Bridges might somehow stand as a symbol for connecting places or the freedom to travel. By opening up the borders inside the European Union, at the same time the outside European borders got reinforced. Europe today presents itself as this open, international and democratic space, but freedom of travel is still an issue.