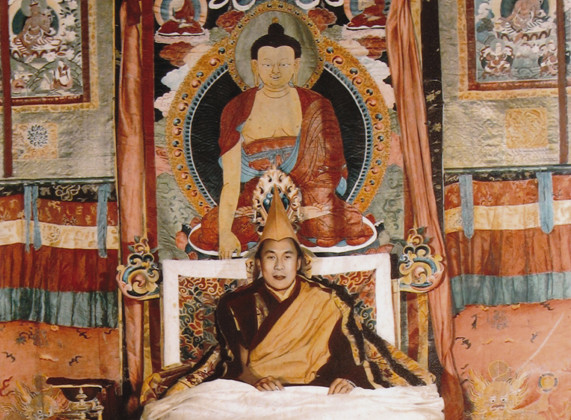 Witte de With is excited to unfurl her 2013 program with Tulkus 1880 to 2018, a mastodontic artwork and work in progress by Paola Pivi, based on an extensive international research.
Aimed at creating a complete collection of portraits and basic information on all the tulkus of the world – who in Tibetan Buddhism are the recognized reincarnations of previous Buddhist masters* – from the beginning of photography until today, from all the schools of Tibetan Buddhism and Bon, and from all the areas of the world where this religion is practiced, this growing survey has until now collected over 1100 photographic portraits.
Manifesting in a stunning array of forms, from high production color prints to inexpensive photocopied reproductions, and in scales ranging from pocket-size to large format, these images are the same ones commonly treasured in monasteries, hung in private households or shops, or collected by the faithful. These photographs are considered holy by the believers.
Executed in collaboration with hundreds of tulkus, individuals and institutions around the world, Pivi’s research will continue to grow and be displayed through 2018 in various venues, up to a total of 10 exhibitions, after which it will be donated to the Tibetan people. The direction of the research itself has been delegated to Tibetan individuals, under the supervision of Tibetan historian Tashi Tsering, Director of Amnye Institute, Tibetan Centre for Advanced Studies, Dharamshala, India. The entire project/artwork Tulkus 1880 to 2018 is non profit.
Tulkus 1880 to 2018 uncharacteristically lays bare these objects of specific veneration within the confines of a religiously plural, and often secular art institution–an institution that conversely is not known for presenting nominally sacred objects to its audience, and is itself enshrined within a long history of aesthetic discourses that attempt to establish a ‘visual neutrality’.
Witte de With Director Defne Ayas calls the exhibition “a major undertaking of key historical value” and adds: “As Witte de With, we are tremendously proud to be a partner to this important project, for which Paola Pivi went beyond and above, and collaborated with spiritual leaders, scholars, researchers, and photographers, as well as with special archives. It is indeed a treat to experience it.”
* In Tibetan Buddhism, a tulku is the recognized reincarnation of a previous Buddhist master (a highly realized teacher or lama, e.g. H.H. the Dalai Lama or H.H. Karmapa) who is able to choose the manner of their rebirth and can often reveal the place of their next birth by means of cryptic clues. Tulkus are collectively revered for holding the lineages of oral transmission of all of the Buddha’s teachings, which have been handed down through many generations. Most often they are referred to as Rinpoche or ‘precious one’.
With photographs by:
Daniel Kuma Bärlocher, Sue Byrne, Das Brothers, Alexandra David-Néel, Don Farber, James Giabrone, Marion Griebenow, Thomas L. Kelly, Kinsey Bros, Vijay Kranti, Mr. M. Linden, Heather Lindquist, Marvin Moore, Melina Mulas, Tashi Nangchen, Sarah Orbanic, Tashi Paljor, Tenzing Paljor, Matthew Pistono, Claire Pullinger, Raghu Rai, Matthieu Ricard, Joseph Francis Charles Rock, Tim Roodenrys, Ritu Sarin and Tenzing Sonam, David Sassoon, Sandra Scales, Jurek Schreiner, Albert Shelton, Tseten Tashi, Gursed Tserenpil, Neal Watkins, John Claude White, David Zimmerman, and many more.
With sincere thanks to the hundreds of people and institutions who have made this project possible, and special thanks to the Private Office Of His Holiness The Dalai Lama.
Tulkus 1880 to 2018 is curated by Davide Trapezi and co-commissioned by Castello di Rivoli Museum of Contemporary Art and Witte de With Center for Contemporary Art. Special thanks go to all the sponsors who have supported this project from its inception onwards: Artissima, Turin; Galleria Massimo De Carlo, Milan and London, Galerie Perrotin, Hong Kong /Paris, Photographic Laboratory Grieger, Düsseldorf, and generous contributions of anonymous donors.
The project Tulkus 1880 to 2018 and its progress is documented on the following website: www.tulkus1880to2018.net.
Public Programs
In a fashion more prismatic than mirroring, Witte de With will organize a symposium in two parts in which mental visualization, projection, and modeling will be put to task to unravel the question of how the grasping of the world as a fixed image–pictorial and/or descriptive–can hold one belief over another.
21 November 2012
New Beginnings
Film screening of The Reincarnation of Khensur Rinpoche by Ritu Sarin and Tenzing Sonam.
2 February 2013
Lacing Buddhist Threads in Contemporary Art
This transversal event joins together a set of thinkers so as to draw out just a few rich strands from the art and culture, which bind Buddhist history. Curator Davide Quadrio will lead the audience through the visual narrative depicted in the 17th century Tibetan thangka (painting) portraying Tsuglag Gyatso, the Third Pawo Rinpoche (c 1567–1630), which references to the origin of the tulku photographic portrait tradition and hangs in the Witte de With galleries as a loadstone for the general exhibition. Expanding on the contemporary history of Buddhism in the West, artist Louwrien Wijers will in conversation with art historian Arnisa Zeqo trace early parallels between pre-Christian iconography, and the Buddha’s image, punctuated by personal reflections on Wijers’ introduction of the 14th Dalai Lama to Joseph Beuys and the European art scene in the 1980s.
More information
30 March 2013
Between Seeing and Believing
This symposium will tackle a novel course and explore the faculty of imaging, both pictorially and descriptively, by focusing on how belief can be constructed through the process of envisioning. To this end, several scholars including Andrei Pop, Minou Schraven and Pascal Rousseau present a short iconographic reading of a single image of their own choice respectively—collectively though, each of these images revolve around the idea of visions, be they found in dreams, hypnosis, hallucinations, representations of the afterlife, or other related themes.
www.wdw.nl