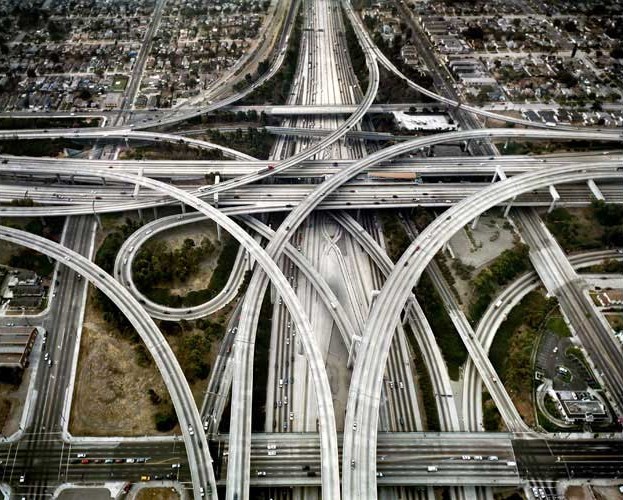 “In 1997 I had what I refer to as my oil epiphany. It occurred to me that the vast, human-altered landscapes that I pursued and photographed for over twenty years were only made possible by the discovery of oil...”
- Edward Burtynsky

Canadian photographer Edward Burtynsky has travelled the world to chronicle the effect of oil on all our lives, and to reveal the rarely seen mechanics of its production and distribution.

This exhibition shows three sections from Burtynsky’s series OIL: Extraction and Refinement, Transportation and Motor Culture and The End of Oil. The works depict landscapes scarred by the extraction of oil, and the cities and suburban sprawl defined by its use. He also eloquently addresses the coming end of oil, as we face its rising cost and dwindling availability.

Burtynsky's colour photographs render his subjects with a transfixing clarity of detail. From aerial views of oil fields and highways ribboning across the landscape, to derelict oil derricks and mammoth oil-tanker shipbreaking operations, we are confronted with the evidence of our dependence on this finite resource.

Edward Burtynsky (b.1955) is one of Canada's most respected photographers. His photographic depictions of global industrial landscapes are included in the collections of over fifty major museums around the world, including the National Gallery of Canada, the Bibliotèque Nationale in Paris, the Museum of Modern Art and the Guggenheim Museum in New York.

Edward Burtynsky: OIL was organised in close collaboration with Huis Marseille Museum for Photography in Amsterdam, Gallery Nicholas Metivier in Toronto and the artist himself.
www.photonet.org.uk