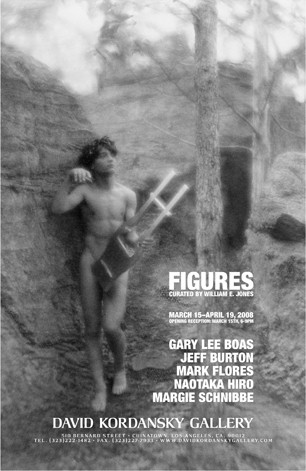 David Kordansky Gallery is pleased to present Figures, a group exhibition curated by William E. Jones. The opening reception will be held on Saturday, March 15th from 6 to 9pm, and the exhibition will be on view through April 19th.
The curator offers the following statement about the show:
Figures is the title of an exhibition of the work of Gary Lee Boas, Jeff Burton, Mark Flores, Naotaka Hiro, and Margie Schnibbe, which I have organized for David Kordansky Gallery in the spring of 2008. In choosing the word figures for the show, I hope to convey not only the work’s most salient characteristic – recognizable images – but also and importantly the ambiguities it sustains. Figure, used colloquially, is also non-specific: a figure might be an illustration in a book, an academic nude, a human shape judged for allure, or an historical personage; and in common speech, a number is also called, simply, a figure. Equally important for my purposes, figure, in its verb form, can refer to a mental process, an acknowledgement of understanding; “it figures.”
Photography was once called, memorably, “the royal road to drawing.” In the 19th Century, when this phrase was coined, there accumulated a great reserve of energy that was somewhat later understood to be powerfully sexual. The artists in the present exhibition have witnessed the release of repressed energy; indeed, some of them have been party to prodigious displays of it. Art degenerates, so the reactionaries who still trouble themselves with matters of culture warn us, as it approaches the condition of pornography. The artists in Figures wish to question this meretricious sentiment. The site of their explorations is the “perverse” location between drawing and photography, whether as an expedient (a “royal road”) or as a vehicle for their supposed degeneracy.
Gary Lee Boas has been photographing celebrities and attractive men for decades. A voracious archivist of the ephemeral and the glamorous, Boas has exhibited widely and has published two books, Starstruck and New York Sex – 1979-1985. The photographs chosen for Figures are drawn from personal and intimate work that has not previously been exhibited.
Negotiating the boundaries between art, fashion and adult movies, Jeff Burton has exhibited in museums and galleries all over the world. He lives in Los Angeles, though his pictures have not been exhibited here since 1993. His works for Figures are photographs of found materials used in the production of porn magazines. Jeff Burton is represented by Casey Kaplan, New York.
Mark Flores, whose drawings often derive from photographs and video stills, exhibits regularly in Los Angeles and London. His work was recently on view in Sympathy for the Devil at the Chicago Museum of Contemporary Art. The videos of Paul Morris inspired Flores’ piece in the current exhibition.
Native of Osaka, resident of Altadena, Naotaka Hiro uses his own nude body as the model for many of his drawings and photographs. His special interest is in those parts of his body that cannot be seen without assistance or apparatus. He is represented by Misako & Rosen Gallery in Tokyo, and he has not previously exhibited the works in Figures in Los Angeles.
Margie Schnibbe produces films, videos, as well as numerous drawings, in her Silverlake studio. A documentary she directed, Pornstar Pets, featuring many industry luminaries, was recently released on DVD. Her suite of drawings in Figures makes use of Richard von Krafft-Ebing’s Psychopathia Sexualis (1886) and other edifying readings.
Curator William E. Jones has also chosen certain appropriated photographs to include in Figures. The grouping, entitled Sailors, Pan, and Orpheus, draws from the work of pictorialist photographer F. “Fred” Holland Day (1864-1933) and pioneering photojournalist Frances “Fannie” Benjamin Johnston (1864-1952).
www.davidkordanskygallery.com