Grey Peak Of The Wave 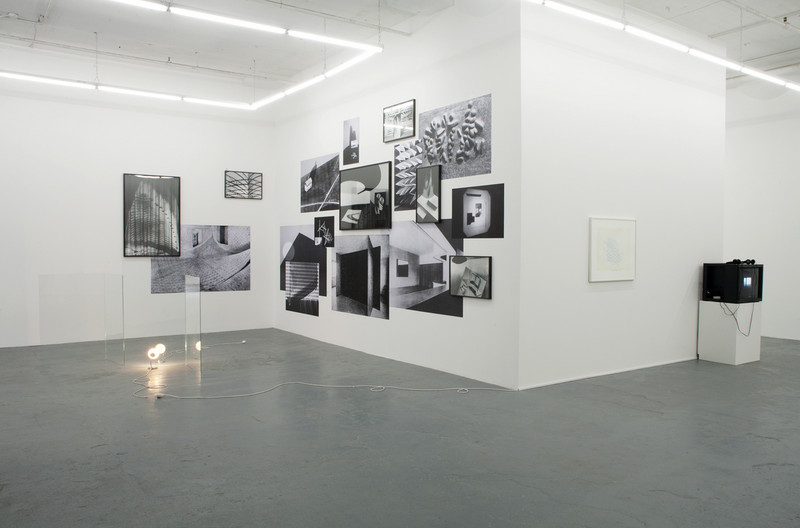 Grey Peak of the Wave brings together six European artists whose work shares an interest in geometric constructions and abstract symbolism. The exhibition’s point of departure is the works on paper of Guy de Cointet (1934-1983, French), an influential figure in Los Angeles’ conceptual art scene of the 1970s; the show’s title is taken from a drawing by de Cointet who in turn borrowed a line from an Ezra Pound poem. De Cointet was fascinated with language and explored its resources in his performances and drawings. Reflecting aesthetics that oscillate between games and logical constructions, his drawings take the form of cabbalistic aphorism, mystical signifiers or coded imagery. Composed according to algorithmic visual codes, they were often constructed as mirror images and given performative titles. Thus visual reflection and performativity are the two main axes of the exhibition, which is constructed around the physicality of the gallery space and, more specifically, its corners.

In the context of de Cointet’s drawings, five emerging artists have been invited to present a multidisciplinary ensemble of works motivated by a reflection on abstraction and the avant-garde. Alicja Kwade’s (b. 1979, lives and works in Berlin) surrealistic bent mirrored sheets of Vom Zukünftigen Hintergrund unter anderer Bedingung betrachtet (2010) and her installation of reflecting lamps, Teleportation (2010), contradict our perception of the world with their poetic absurdity, as they recall de Cointet’s mirror writing. They face Alexandra Leykauf’s (b. 1976, lives and works in Berlin) black and white untitled kaleidoscopic grouping of historical posters and found photographs (2011), in which she deconstructs images out of their context and rearranges them into new situations.

Agnieszka Polska (b. 1985, lives and works in Krakow, Poland) revisits Polish modernism by recycling old material, collages and archival photographs into narrative and melancholic animated films, such as the enchanting The Plunderer’s Dream (2011). Florian and Michael Quistrebert’s (b. 1976 and 1982, live and work in Paris and Amsterdam) bleach paintings made on black canvas, all Untitled (2012), suggest both geometric compositions and playful dancing characters realized through a reversed photographic technique, where the bleach simultaneously illuminates and erodes the canvas.

Wojciech Bąkowski (b. 1979, lives and works in Poznań, Poland), focuses on his intimate surroundings and produces analog video material that features his chaotic speech, as in the film Making New Worlds Instead of Forgetting About It (2011), and physically engages the viewer in a rough spoken performance, Take A Minute (2012), where sound and image are related to his everyday environment.

Martha Kirszenbaum is an independent curator and writer based in Paris.

This exhibition has been made possible thanks to the generous support of the Polish Cultural Institute, New York and the Cultural Services of the French Embassy, New York.
www.harrislieberman.com