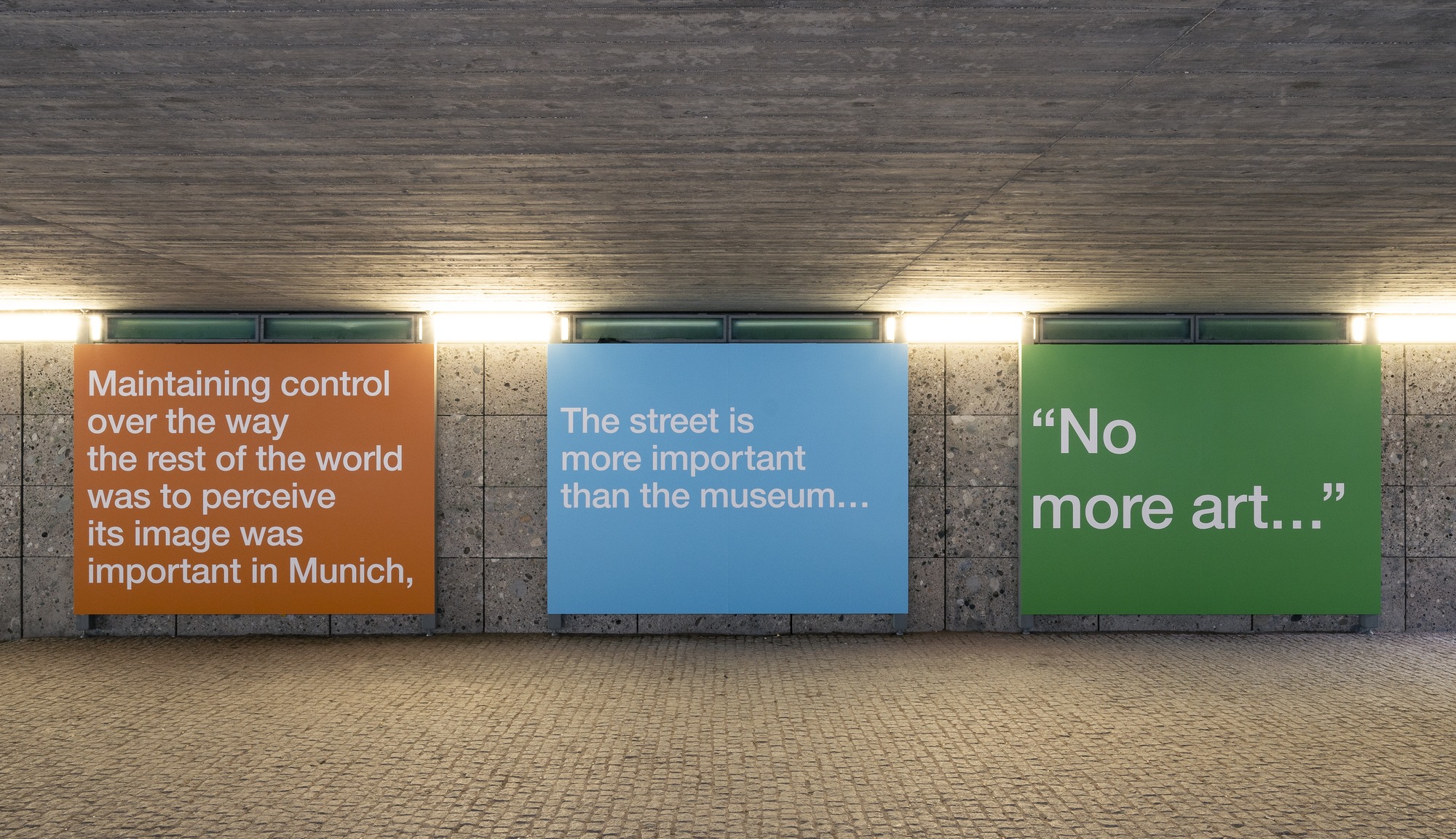 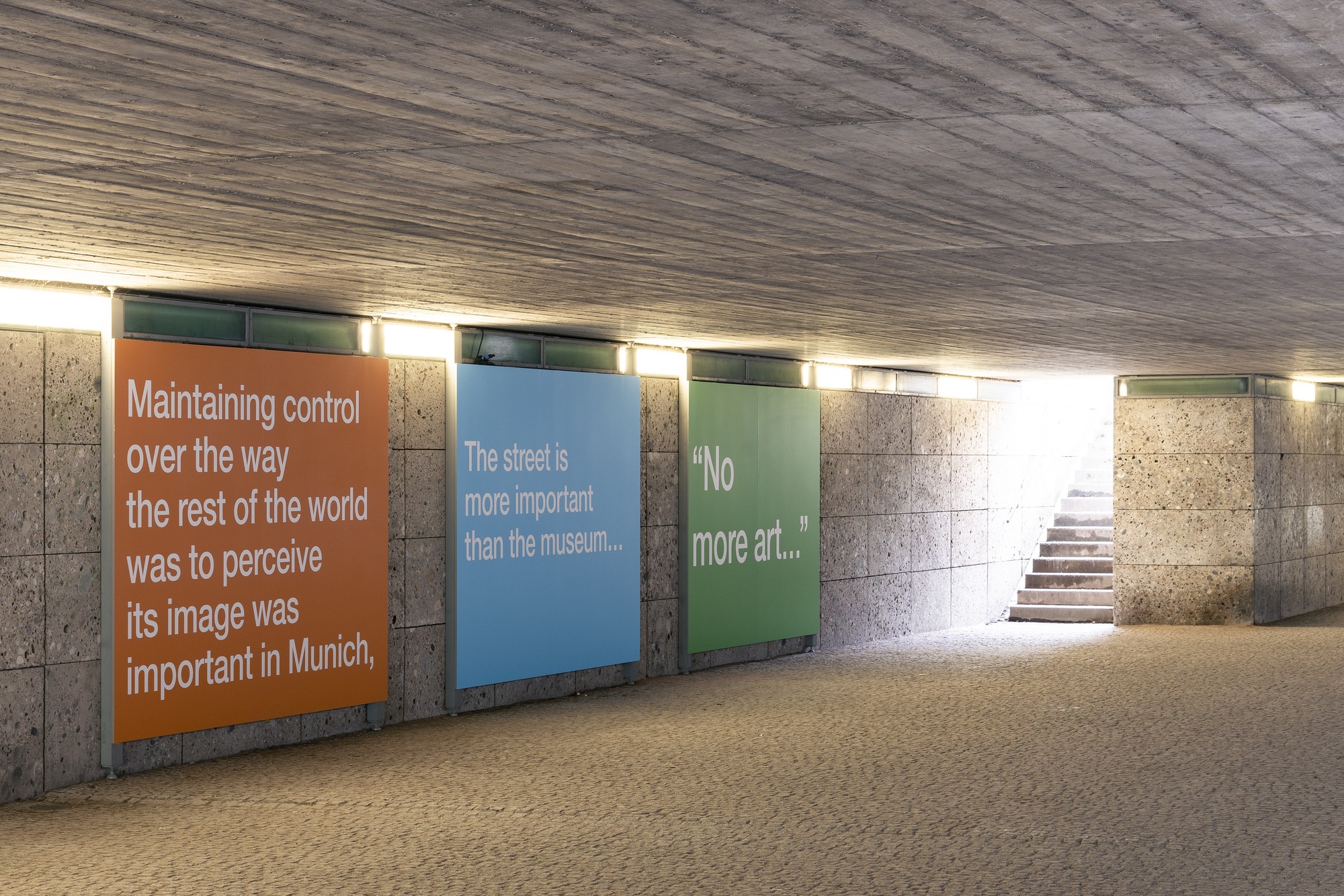 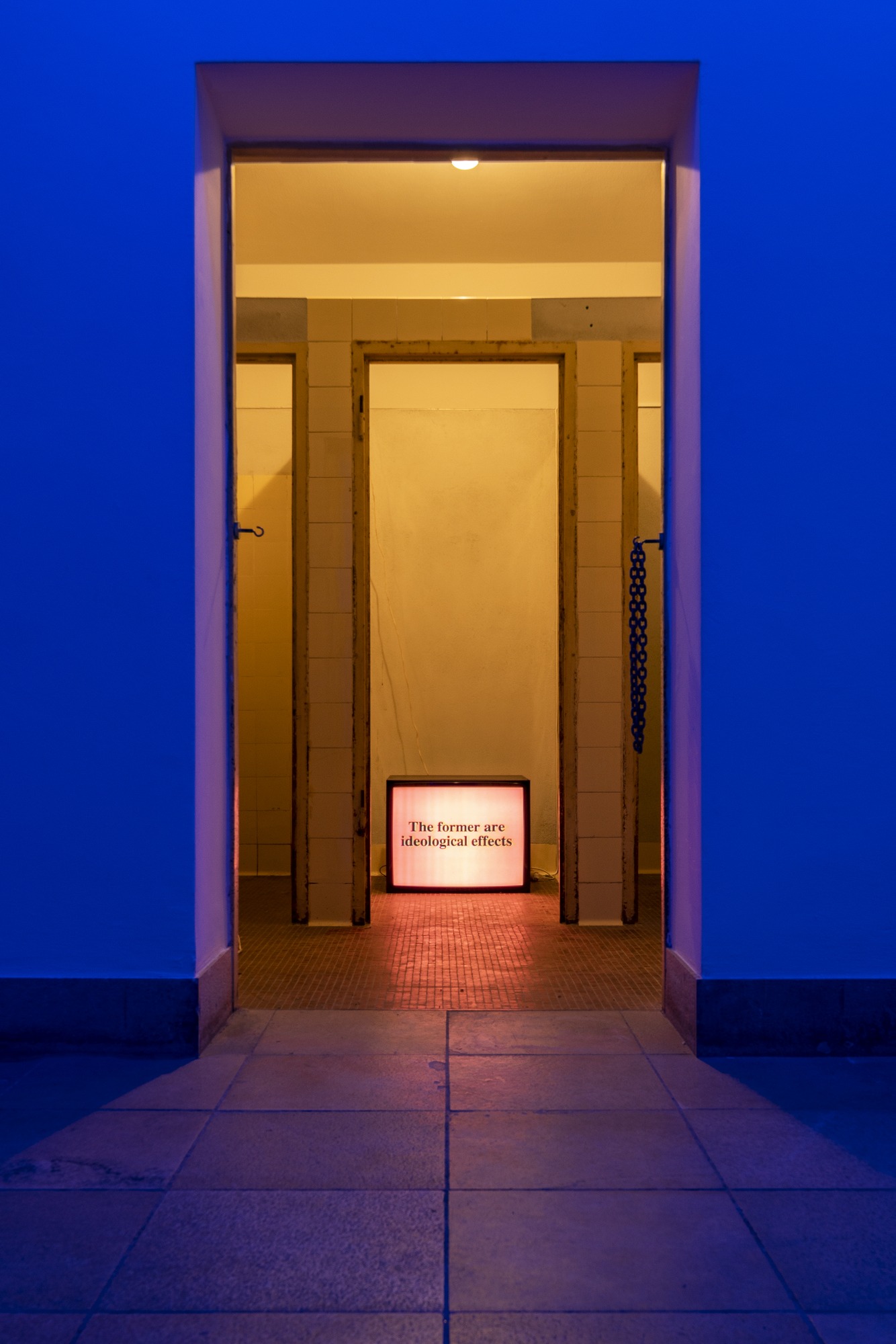 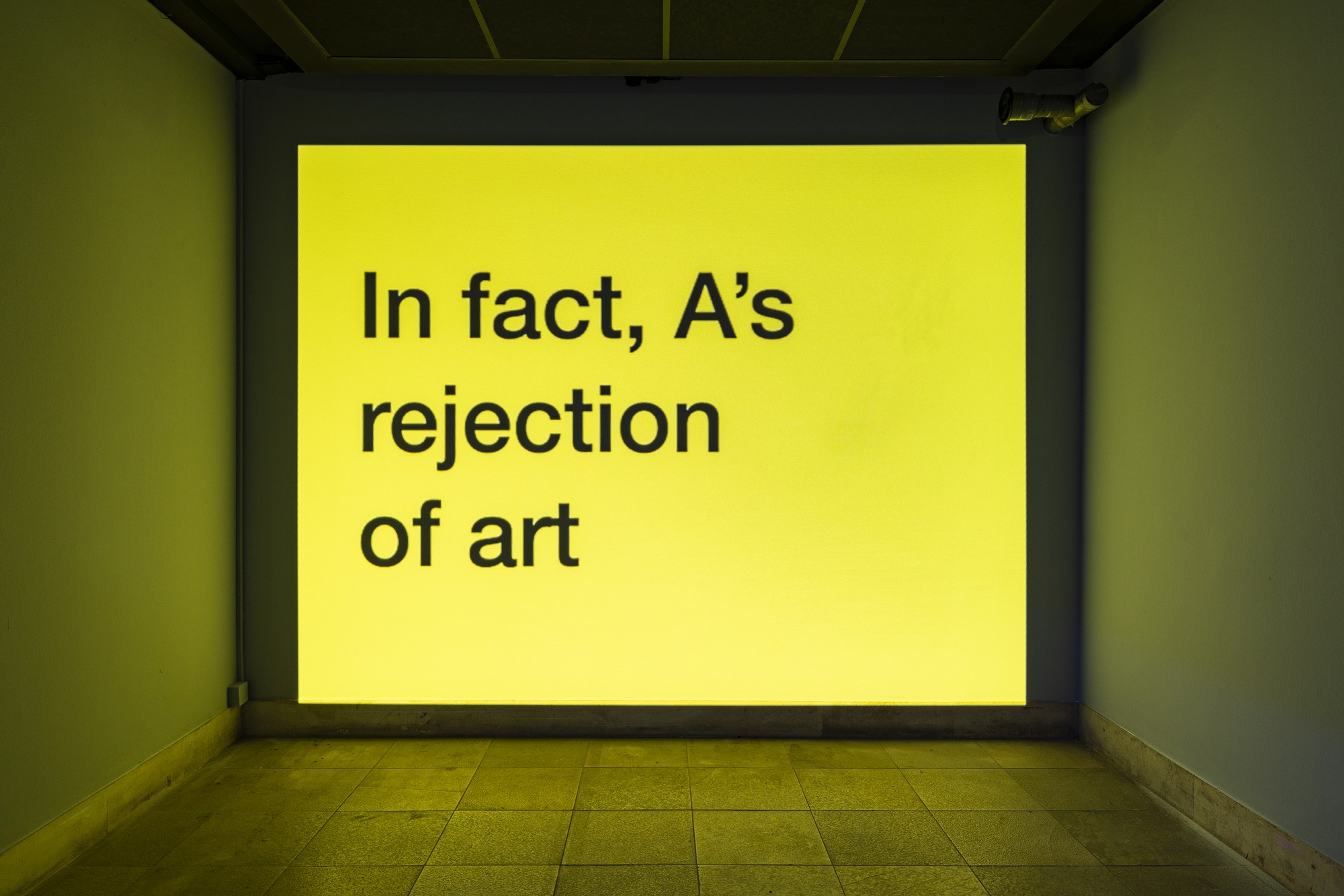 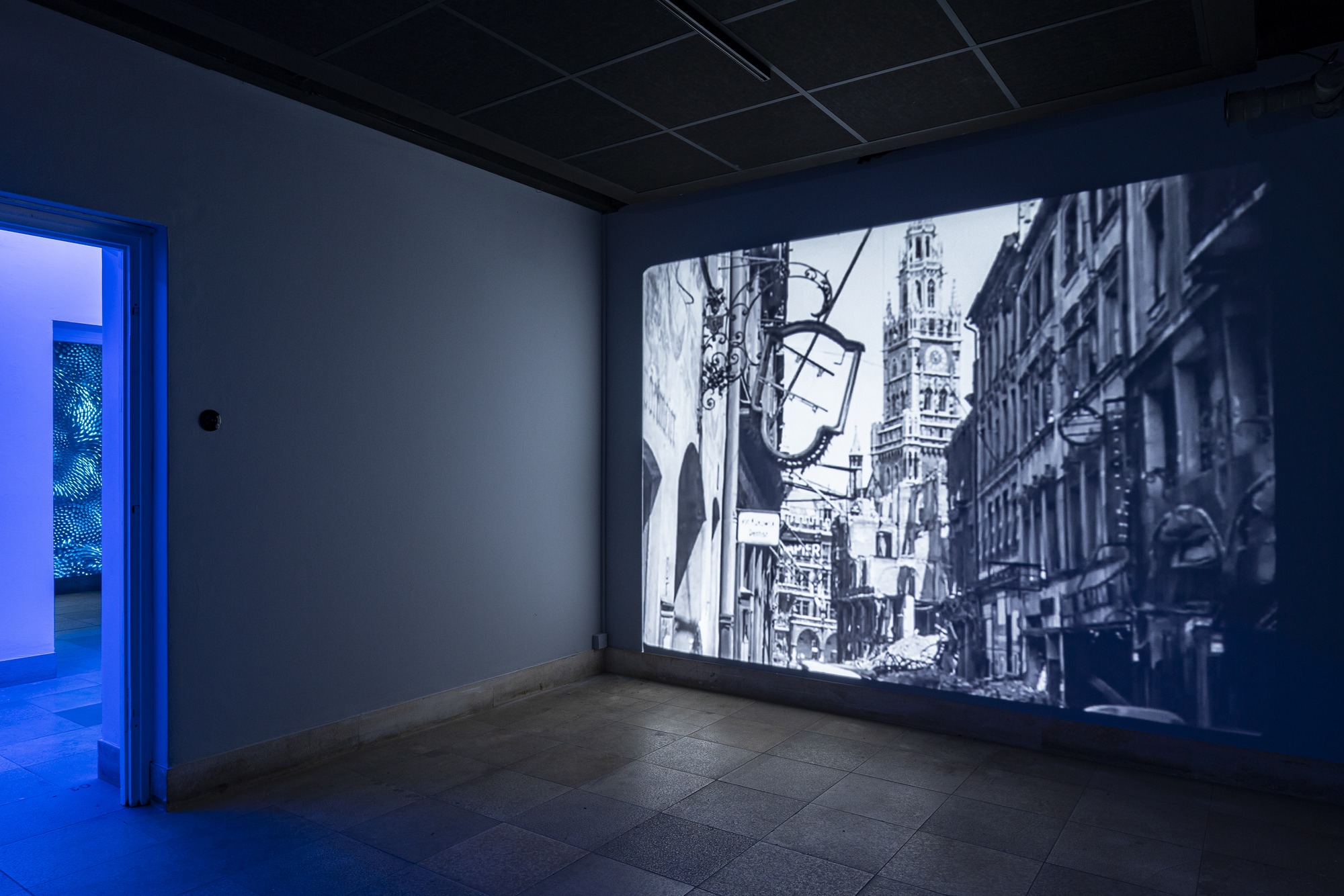 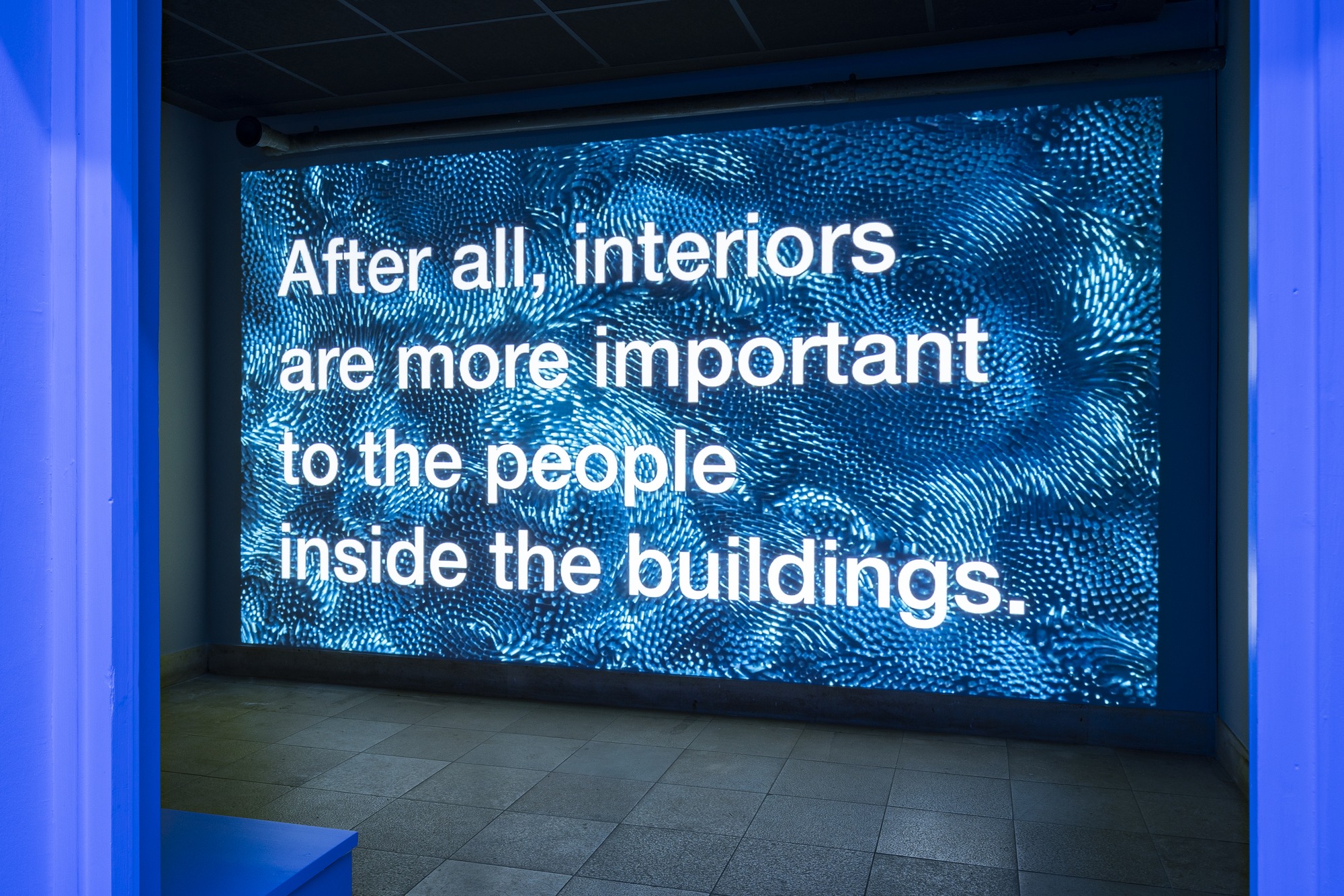 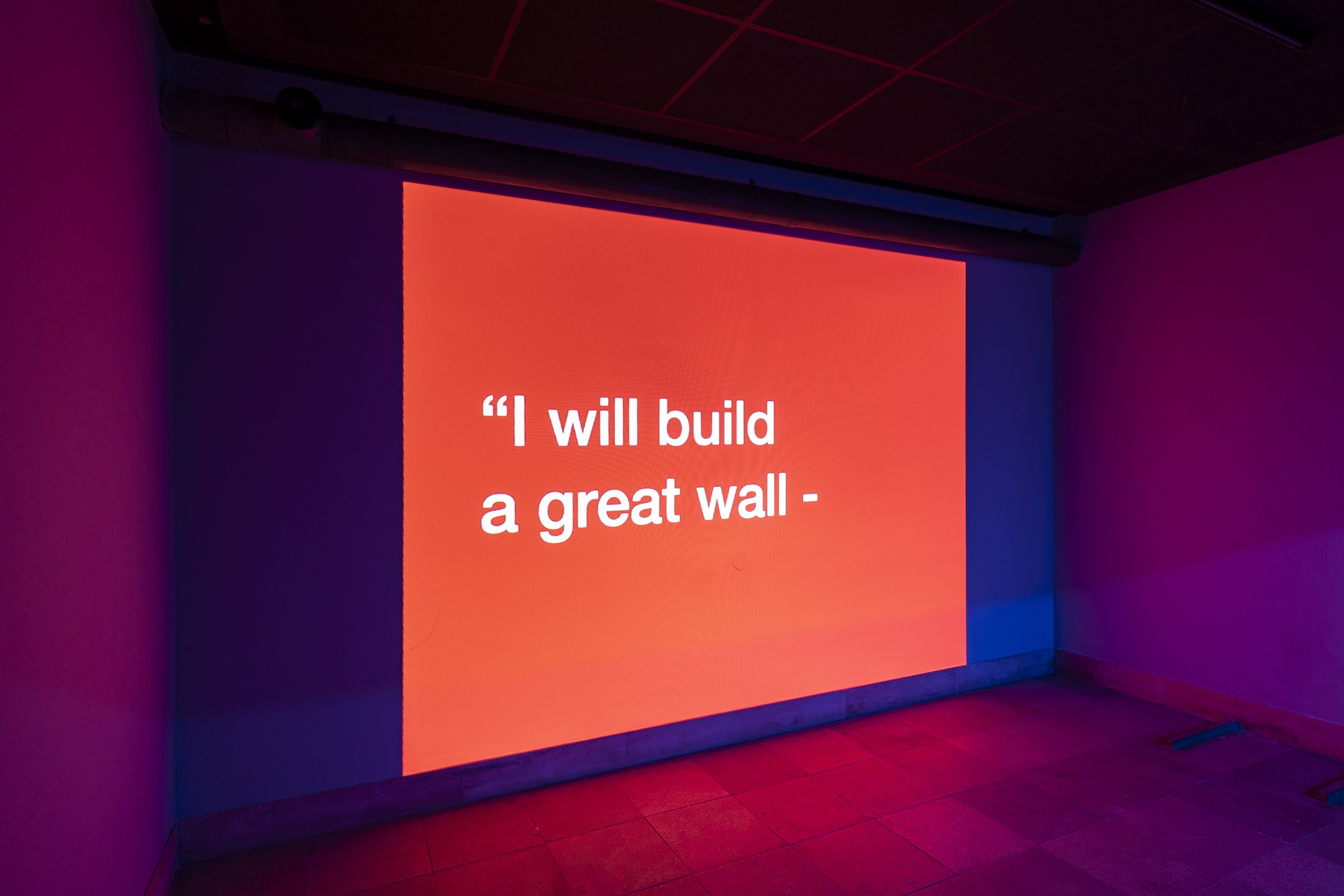 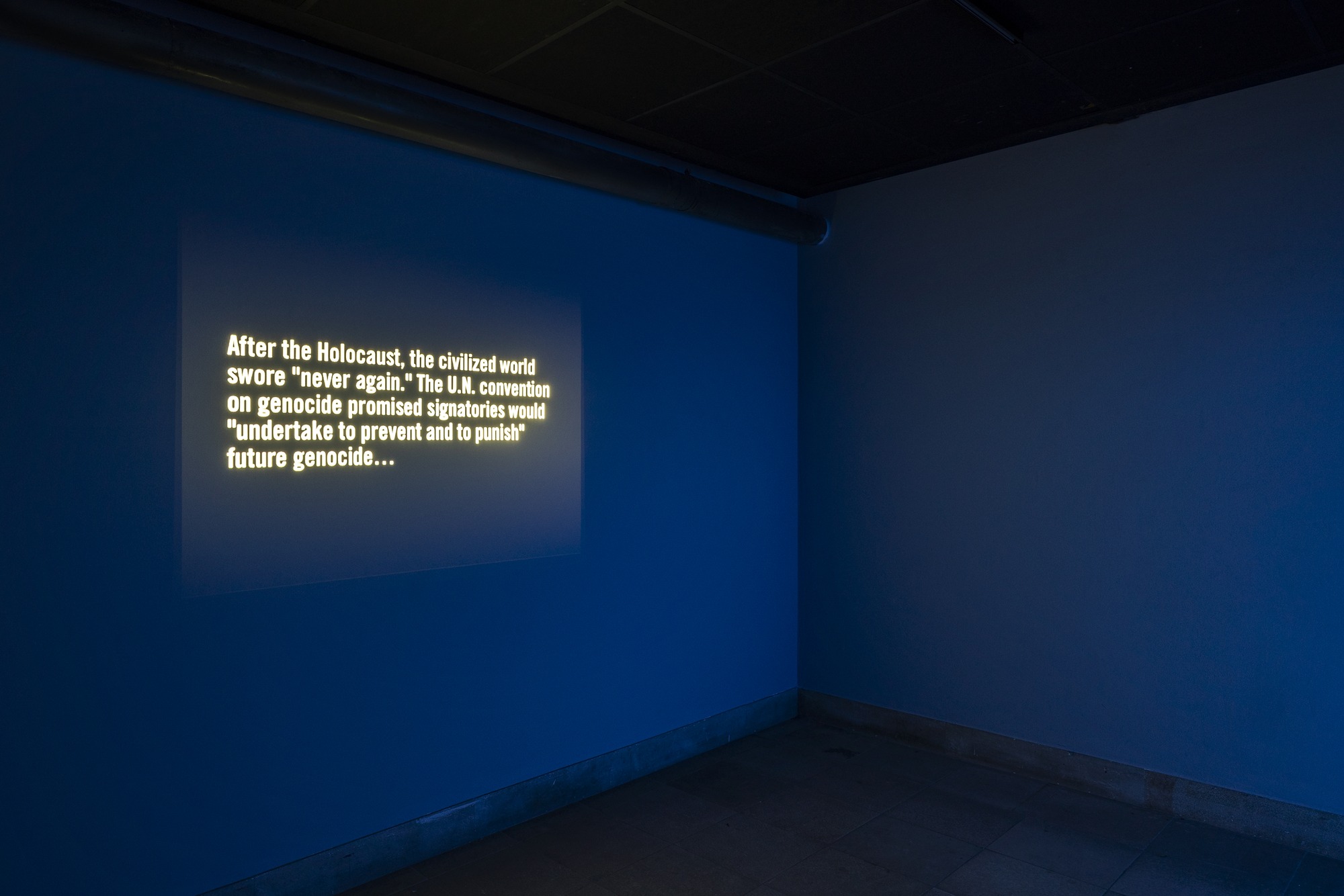 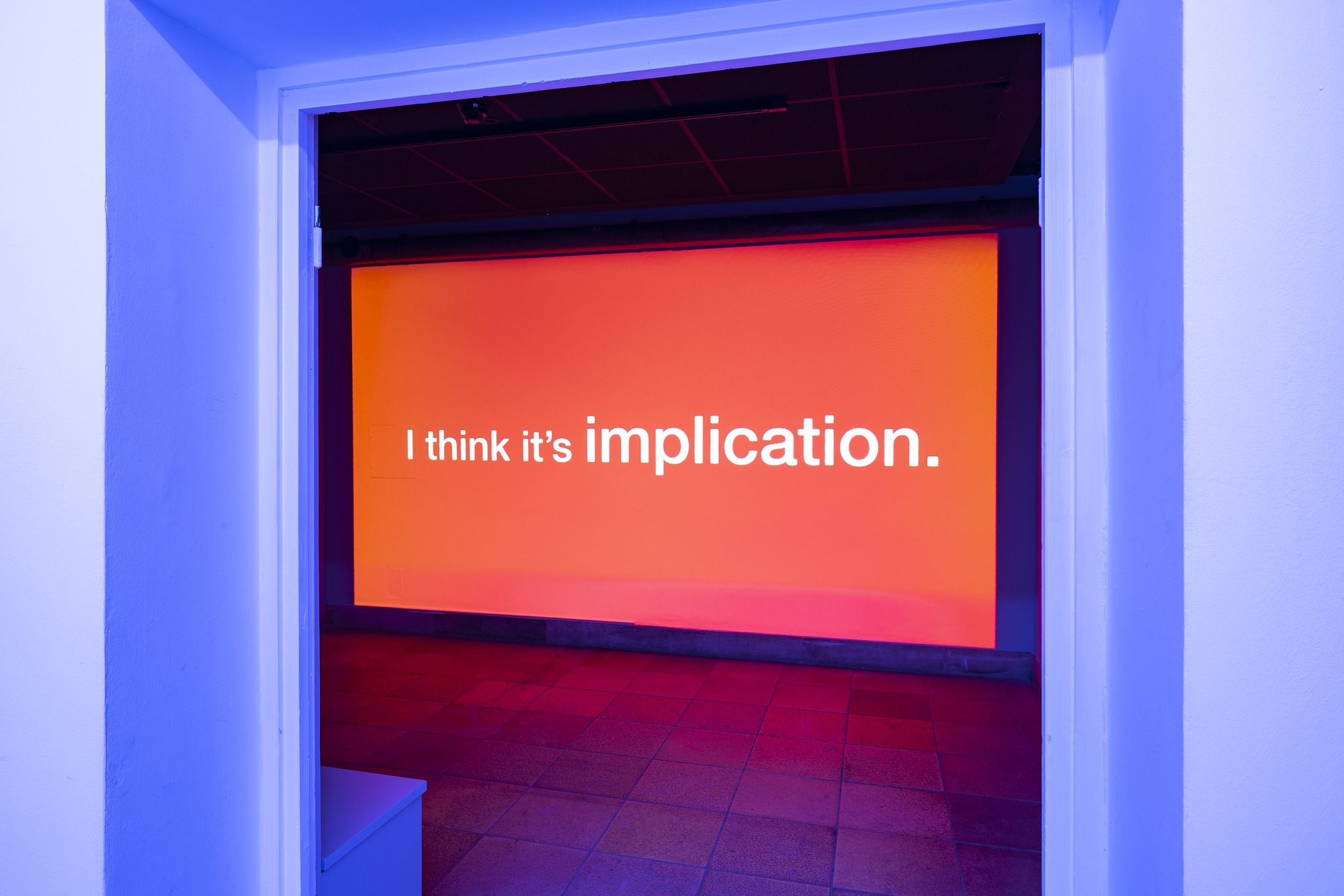 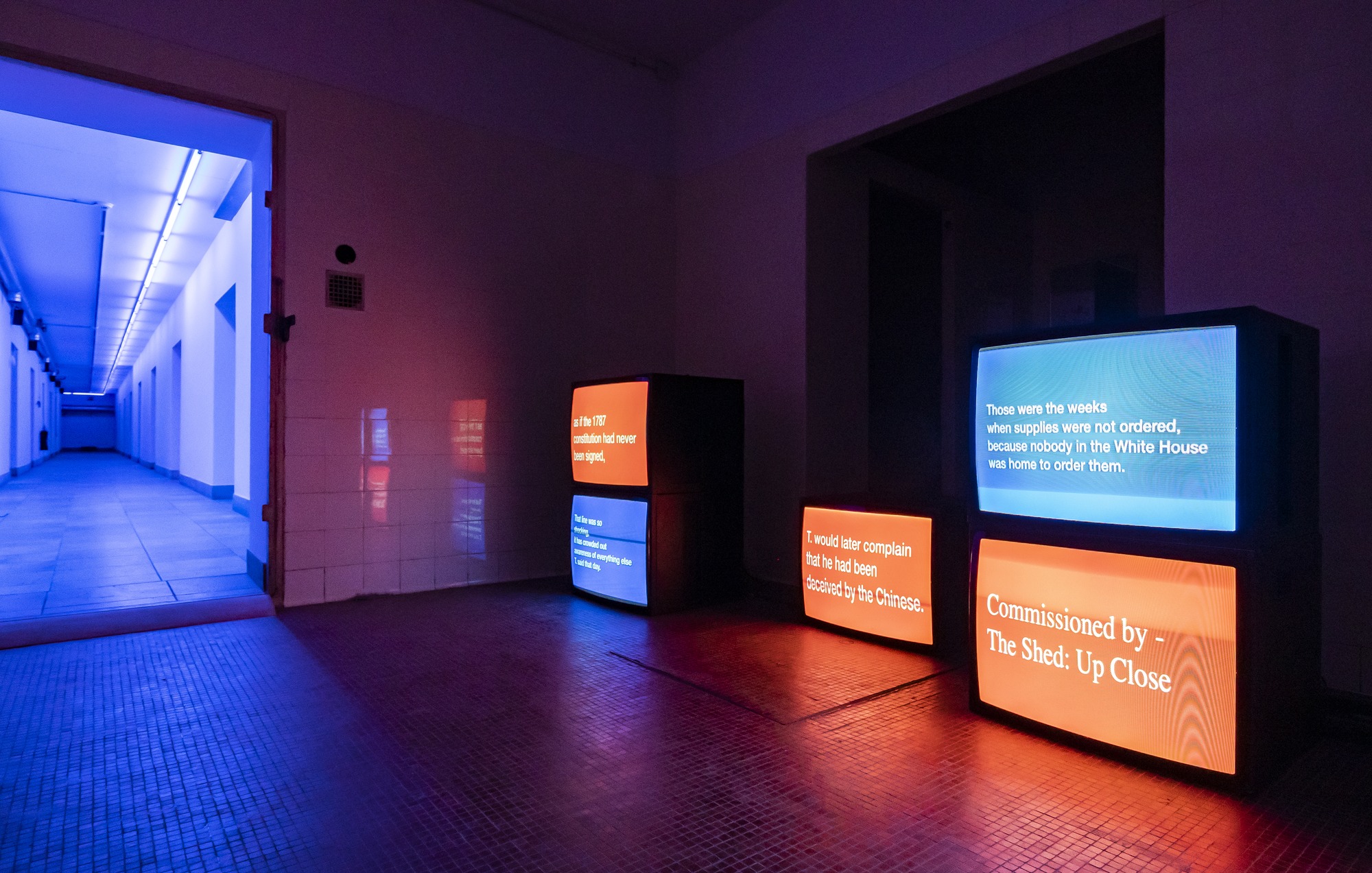 Tony Cokes. Fragments, or just Moments
Installation view
Haus der Kunst, 2022
Photo: Maximilian Geuter
“Fragments, or just Moments" marks the first institutional solo exhibition of U.S.-American artist Tony Cokes ( *1956 Richmond, USA) in Germany and the first comprehensive collaboration between Haus der Kunst and Kunstverein München.
"This season at Haus der Kunst, the programming is presented in the form of dialogues. Conversations can equally sit between institutions, and the exhibition with Tony Cokes marks the first collaboration between Haus der Kunst and Kunstverein München." Said Andrea Lissoni, Artistic Director of Haus der Kunst. "Using both buildings and archives as a starting point, Cokes' commission Some Munich Moments 7937—1972 also continues our institution's commitment to evaluating and re-evaluating our history and presenting the multitude of ways that history comes to define and shape the present."

Cokes takes the historical connection between the two venues located in close proximity as a point of departure to present the newly commissioned work Some Munich Moments 7937-1972 (2022), which is shown both in the two institutions and in the public space situated between them. Drawing from archival source materials, the video investigates the interlinked history of both exhibition venues during the Nazi era and beyond. Some Munich Moments 1937-7972 thus relates the cultural propaganda strategies of the Nazi regime to the visual identity of the 1972 Munich Olympics, which had been coded in direct opposition as "anti-fascist" and "cosmopolitan".

For more than three decades, in his artistic practice, Tony Cokes has explored the political ideologies of media and pop culture and its impact on society, becoming one of the most important, post-conceptual artists to emerge in recent times. Grounded in the experience of the visual exploitation of African American communities in film, television, advertising, and music videos, Cokes has developed a unique language for video essays since the late 1990s that vehemently rejects representative imagery. The artist's fast-moving audiovisual works are based on found text fragments and pop music, stemming from different times and contexts. Through the constant friction between the discursive and disparate cultural references, Cokes alters conventional forms of perception to trace historical continuities. The act of reading discourses on structural racism, capitalism, warfare, and gentrification becomes an interlaced, bodily and public experience.

"I'm interested in the resonances, the re-habitualizations, and the echoes of that historical moment in the contemporary."
Tony Cokes

With "Fragments, or just Moments", Haus der Kunst also stages a survey exhibition that brings together selected audio-visual works from Tony Cokes' three-decade-spanning oeuvre. Situated in the I-SK-Galerie, the former air-raid shelter of the museum, the exhibition displays Cokes' ongoing preoccupation with history and temporality, and sketches a fragmented chronology through the 20th and 21st centuries, moving from the mid-1930s to the present. The fractured timeline does not unfold as a precise linear sequence, but rather demonstrates the interconnectedness, reverberations, and shifts of socio-political realities from different times. Cokes addresses the role of image and sound for ideological manipulation, warfare, exploitation, and the capitalist system inherently based on racist thinking. With its episodic structure of historical events and in Cokes' sampling of discursive, visual, and sonic sources, the exhibition exposes the continuities of structural oppression and social inequality across time and place.

The new commission Some Munich Moments 7937—1972 is also installed at Kunstverein München and within public space, where text and sound from the work are presented in the pedestrian subway at the south end of the English Garden and on the fence of the American Embassy.

On the occasion of the exhibition, a comprehensive catalogue will be published by DISTANZ. It makes Tony Cokes' newly produced text collages accessible in German as well as English, transferring the video essays into the form of sti Is. Newly commissioned essays by Tina Campt and Tom Holert examine Some Munich Moments 7937-1972 from a historical as well as theoretical perspective. These contributions are prefaced by a comprehensive introduction to the collaborative exhibition project by Emma Enderby and Elena Setzer (Haus der Kunst), as well as Maurin Dietrich, Gloria Hasnay, and Gina Merz (Kunstverein München).

As part of the exhibition's public programme, guided city tours will be offered in cooperation with the NS-Dokumentationszentrum and curator Wolfgang Brauneis, exploring the continuities between Nazi and postwar art. Starting with sculptures in Munich's urban space, the postwar careers of renowned artists of the Nazi era who were singled out within the regime as "graced by God" will be examined. In addition, Noah Barker will give a lecture at Kunstverein München in early September as part of the exhibition, focusing in particular on designer Otl Aicher's design ideas for the 1972 Olympic Games.

The exhibition is funden by the Kulturstiftung des Bundes and the Beauftragte der Bundesregierung für Kultur und Medien.
The exhibition by Tony Cokes is a joint project of Haus der Kunst and Kunstverein München and takes place in the two institutions as well as in the public space between them. The respective ticket allows free admission to the other institution on the same day.