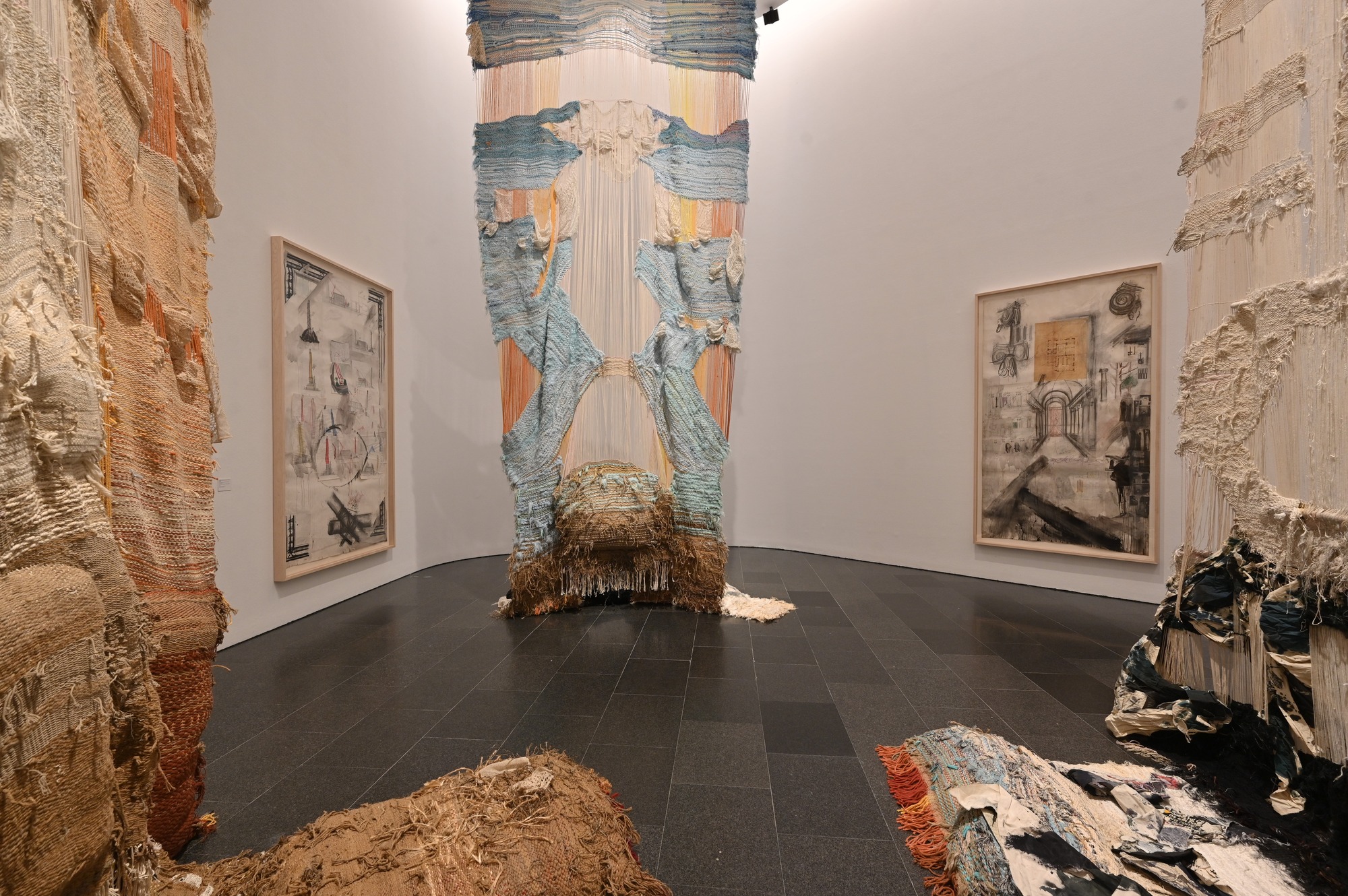 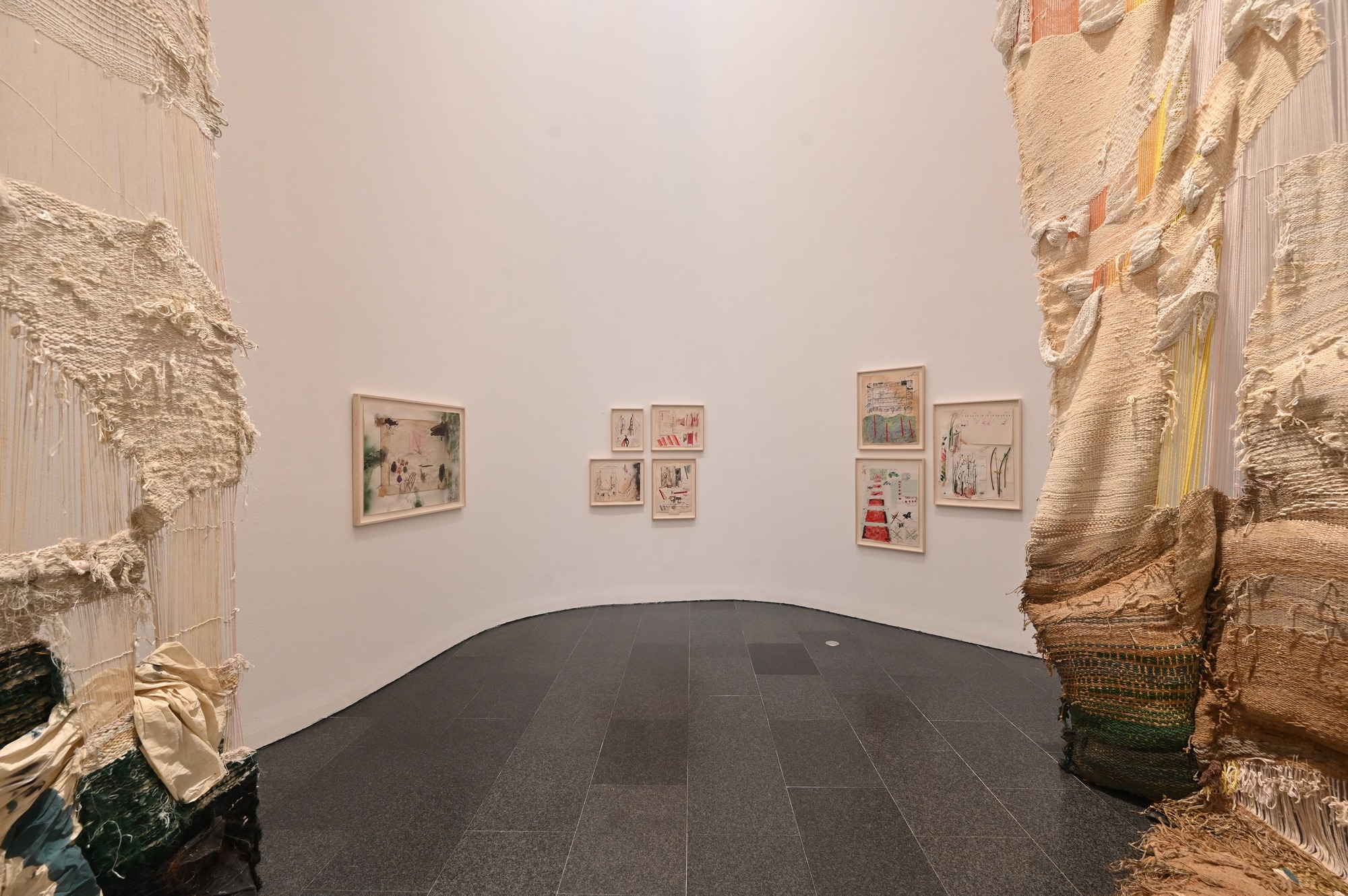 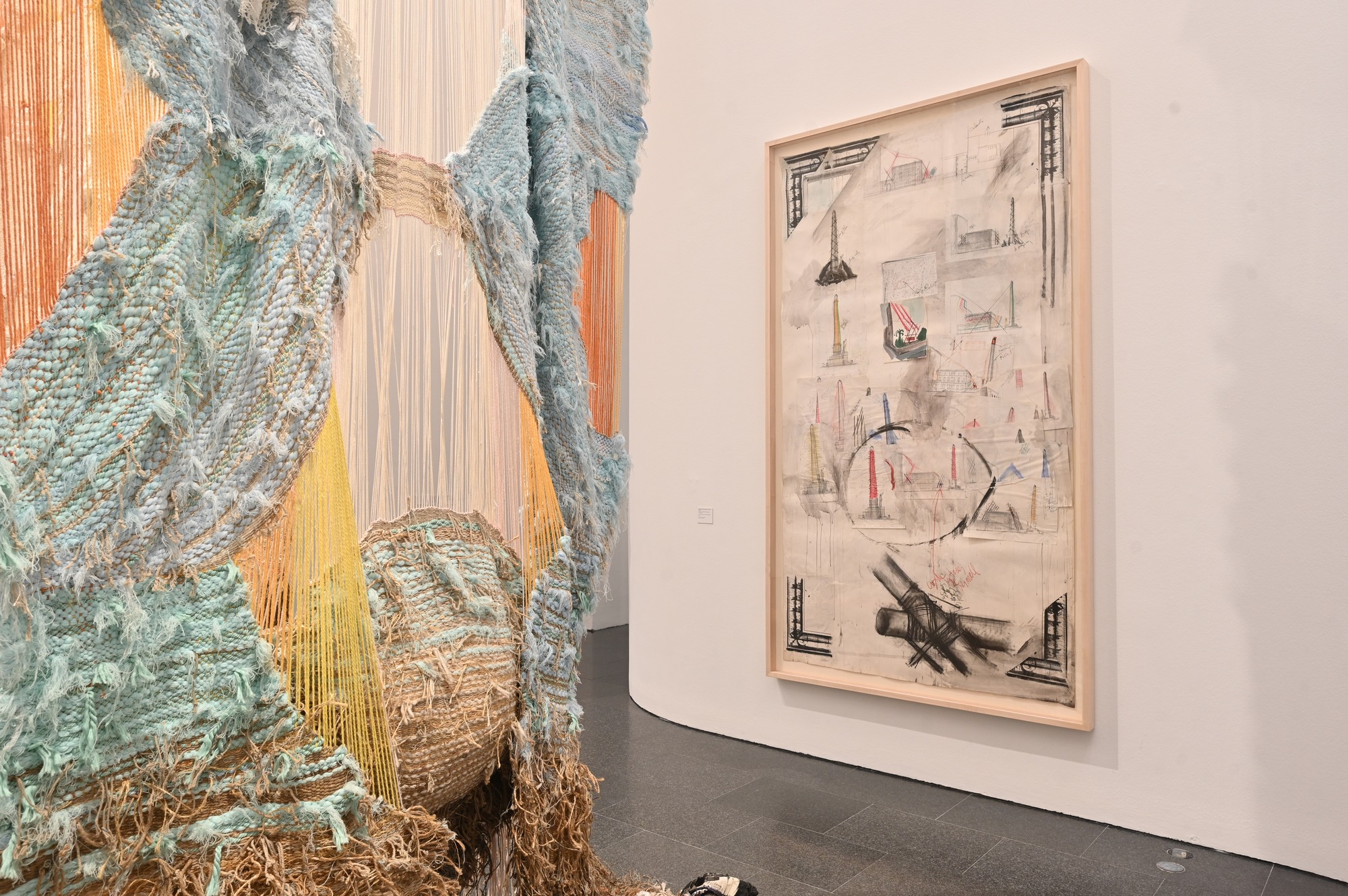 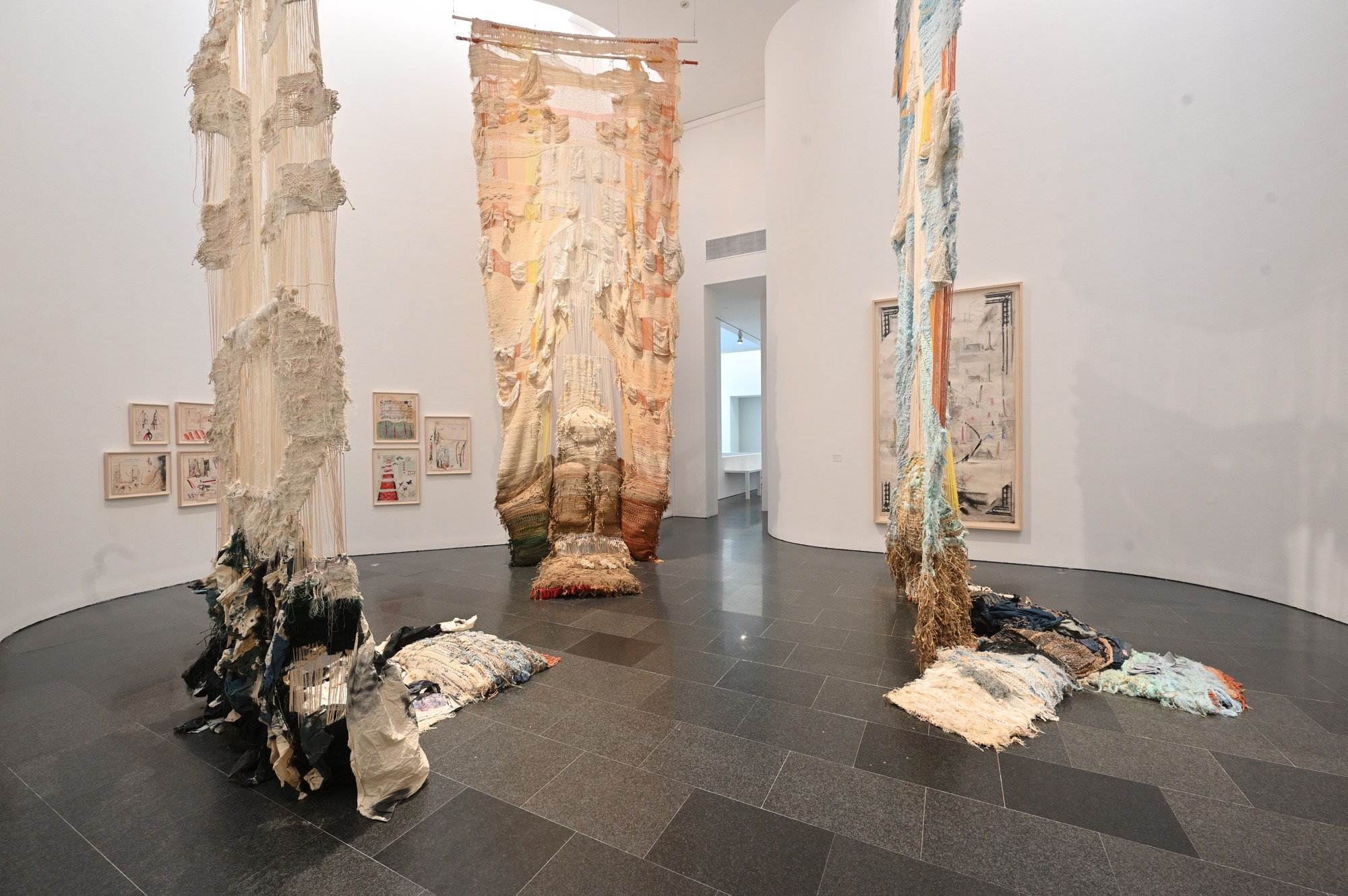 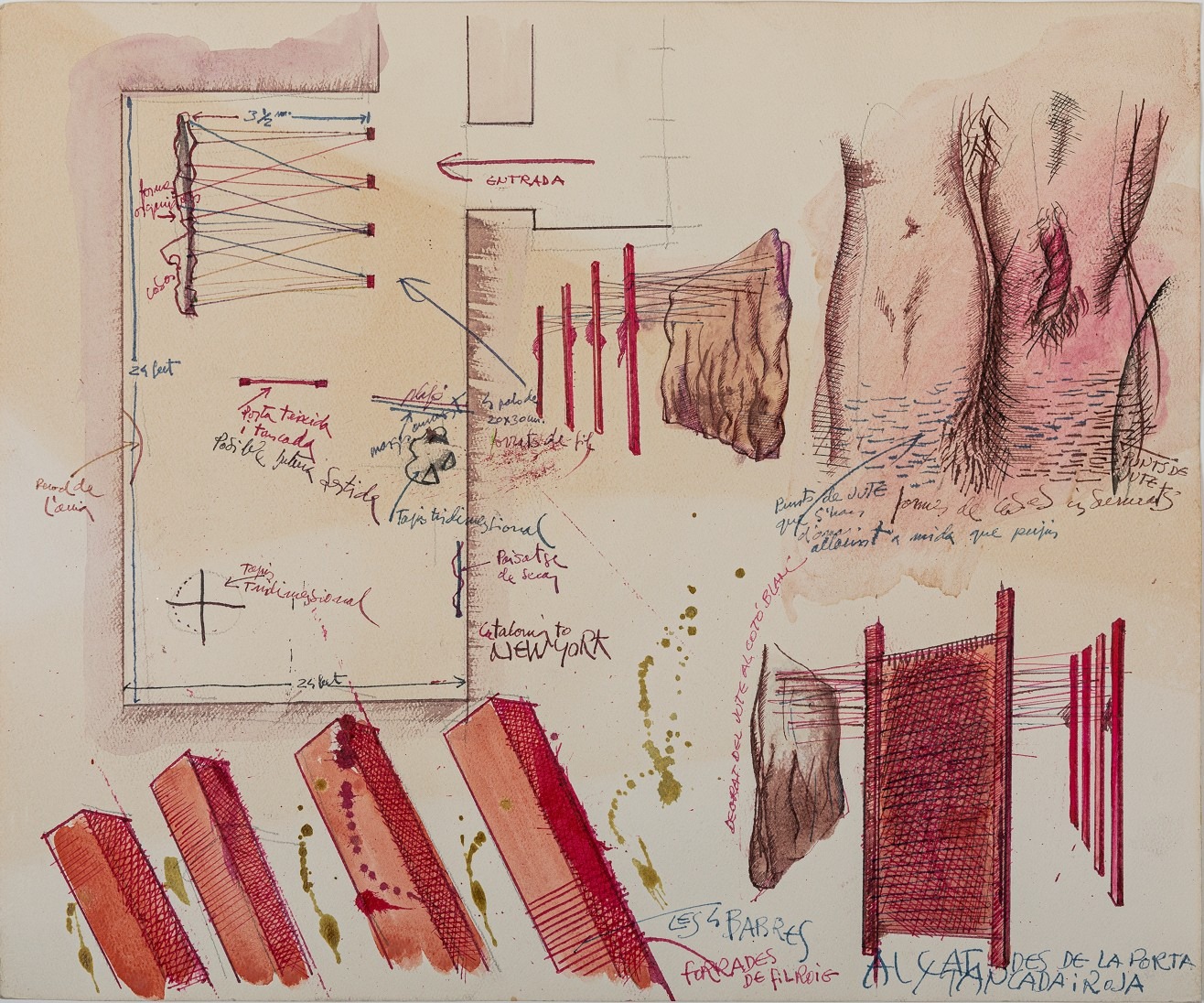 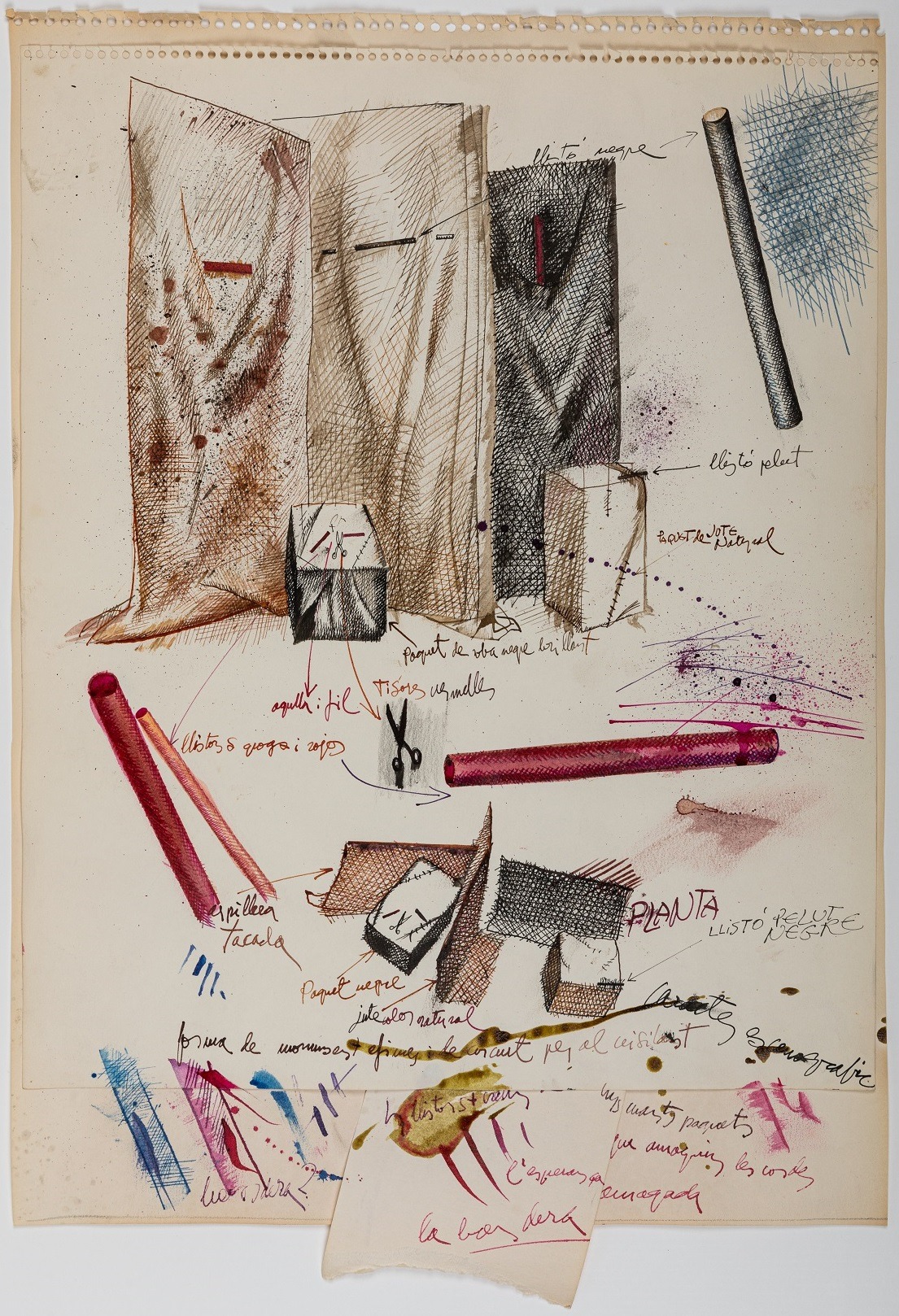 Environment project at the Pierre Fresnay Theater, Ermont, 1979
Josep Grau-Garriga: Dialogue with Light is the first in a series of research and exhibition projects carried out by the Museum around practices and practitioners whose relevance on the local and international scene has not always been sufficiently recognised. Diàleg de llum (Dialogue with Light, 1986–88), the work that gives its name to the exhibition, is a variable installation that Grau-Garriga adapted and incorporated into different architectural spaces, such as the main stairwell of the Palau Robert where the piece was first exhibited in its entirety in 1988. Josep Grau-Garriga (Sant Cugat del Vallès, 1929 – Angers, 2011), a key figure in the Catalan School of Tapestry, experimented with transdisciplinary and large-format works beyond the limits imposed on traditional textile art. Through his so-called ‘environments’, he immersed the viewer in the work by exposing them to a close contact with the materials. The product of a collective process of creation, with his ‘environments’ GrauGarriga explored new forms of artistic pedagogy in which, by bringing art and life close together, artworks were invariably the result of a shared experience. With these types of works, he became a reference in the regeneration of tapestry techniques throughout the second half of the twentieth century.

This is a research project by Núria Montclús, from MACBA’s Exhibition Department, and Esther Grau, the artist’s daughter, in collaboration with Àlex Castro and Alba Clavell, from the Museum’s Restoration Department.

‘I believe that fabric, fibre, is a very important means of communication [...]. Bear in mind that fabric is the external element that has the most contact with our body. It is our second skin. Everyone is familiar with it by touch, by sight. I think we should take advantage of this. I work and constantly look for new solutions, textures, materials and shapes, and I try to say things through textiles.’
Josep Grau-Garriga

Josep Grau-Garriga (Sant Cugat del Vallès, 1929 – Angers, 2011) was a key figure in the renewal of tapestry and contemporary textile art, both nationally and internationally.

After training in painting, drawing, sculpture and engraving at the Arts and Crafts School and the School of Fine Arts, Barcelona, he received a number of mural paintings and artistic stained glass commissions. In 1957, he began working with Miquel Samaranch at the Casa Aymat carpet and tapestry factory. Out of this experience, the following year saw the creation of the Catalan School of Tapestry, where he was able to work with artists such as Joan Miró, Josep Maria Subirachs and Antoni Tàpies.

In 1957, Grau-Garriga made his first trip to Paris, where he met Jean Lurçat, a master of modern tapestry whose ideas, based on a rereading of Gothic tapestry, revolutionised the technique. In 1959, however, he began to question Lurçat’s practice. Impressed by the material and gestural Informalism of Jean Dubuffet, he turned more towards the weight of matter as a key element to achieve the autonomy of textiles as works of art. Henceforth, he introduced new materials of a more common and less ‘noble’ nature into his tapestries, such as jute, rope and wire. This search for the autonomy of textile art and the volumetric games of the materials used, led the artist to experiment progressively with the relationship between textile and space. As a result, from the 1970s onwards, Grau-Garriga’s works acquired a radically different character and freer technique: they were increasingly three-dimensional, no longer hanging on a wall, growing in format and tending to occupy the space in which they were installed.

Encouraged by this progressive occupation of space and by the exploration of the temporal factor in the perceptive experience of the work, in the seventies Grau-Garriga began creating a set of ephemeral ‘environments’ in the interior spaces of monumental buildings and also in public spaces around the world, such as the Arras Gallery, New York (1971), the Centre Culturel du Marais, Paris (1975), Sugarbush ski slope, Vermont (1978), Montgomery University, Washington (1979), Museo Rufino Tamayo, Mexico City (1980–81), French Institute, Barcelona (1984), the Castellet, Perpignan (1984) and the Cathedral of San Nicolás, Alicante (1985), among many others.

These ‘environments’, which he continued to develop throughout his life, were based on textile compositions that occupied the space and invited viewers to take part in the work by inhabiting it and circulating around it. In some cases, the participative nature of thisinitiative resulted in a process of collective and collaborative creation that materialised in the realisation of prior workshops with various collectives, in which Grau-Garriga explored the pedagogical nature of art, inviting the participants to build these ephemeral creations.

Coinciding with the opening of Josep Grau-Garriga: Dialogue with Light, artist Joël Andrianomearisoa will talk to Esther Grau, Josep Grau-Garriga’s daughter, about the significance of textiles and the space in the work of both artists. The use of this medium in contemporary art has very diverse intentions, starting points, formulations, contents and results, and can therefore be interpreted and analysed from different perspectives. The textile element however, always contains a sensory aspect that connects with the living experience.

The works of Josep Grau-Garriga and Joël Andrianomearisoa were exhibited together for the first time at the Art Gallery of New South Wales in Sydney, during the biennial held there in 2020. This coincidence, which is behind the exhibition Josep le monde et moi by Joël Andrianomearisoa, currently being held at the Centre Grau-Garriga d’Art Tèxtil Contemporani, suggests a transversal aspect in the work of both artists: the use of textile elements loaded with emotional content.
www.macba.es