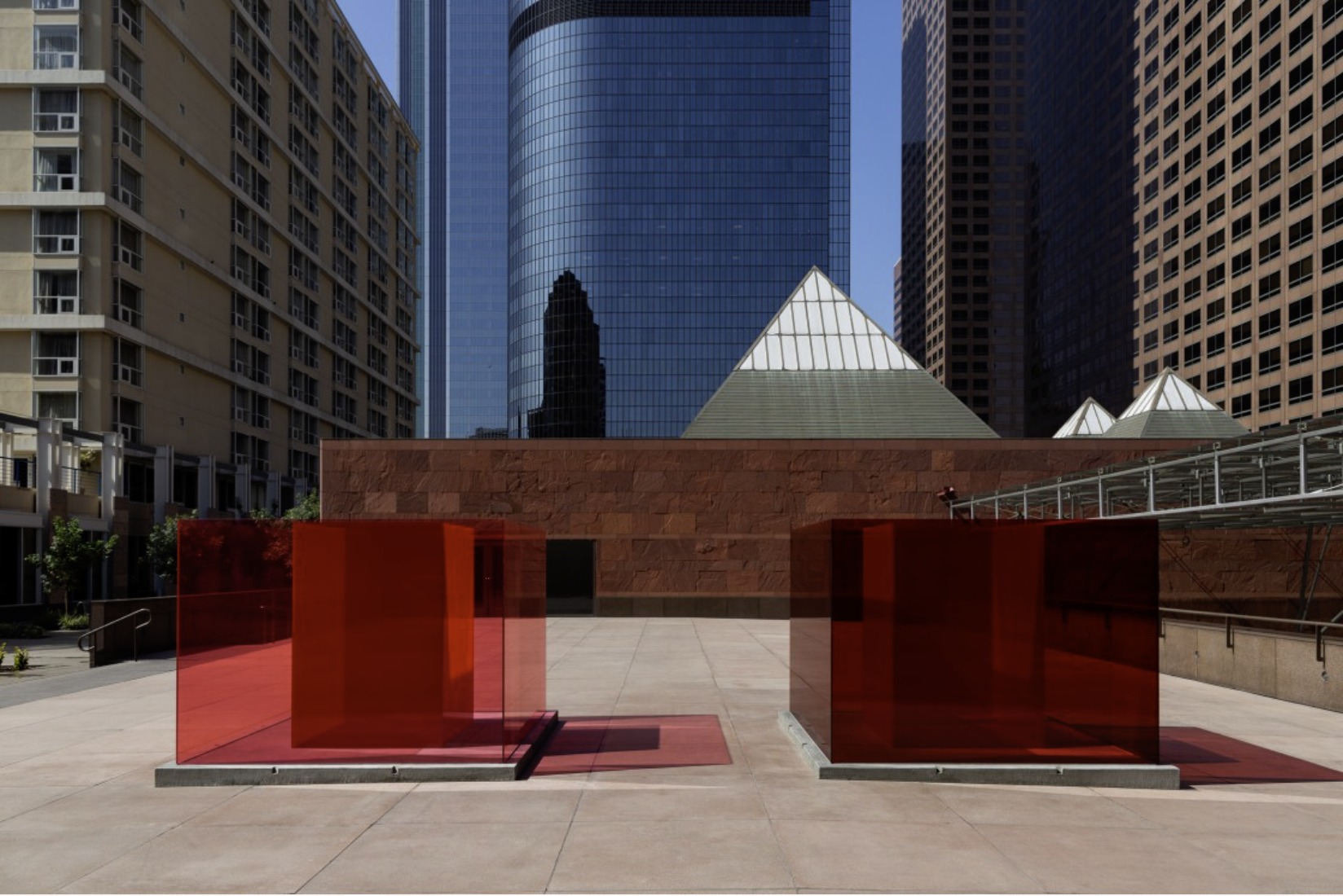 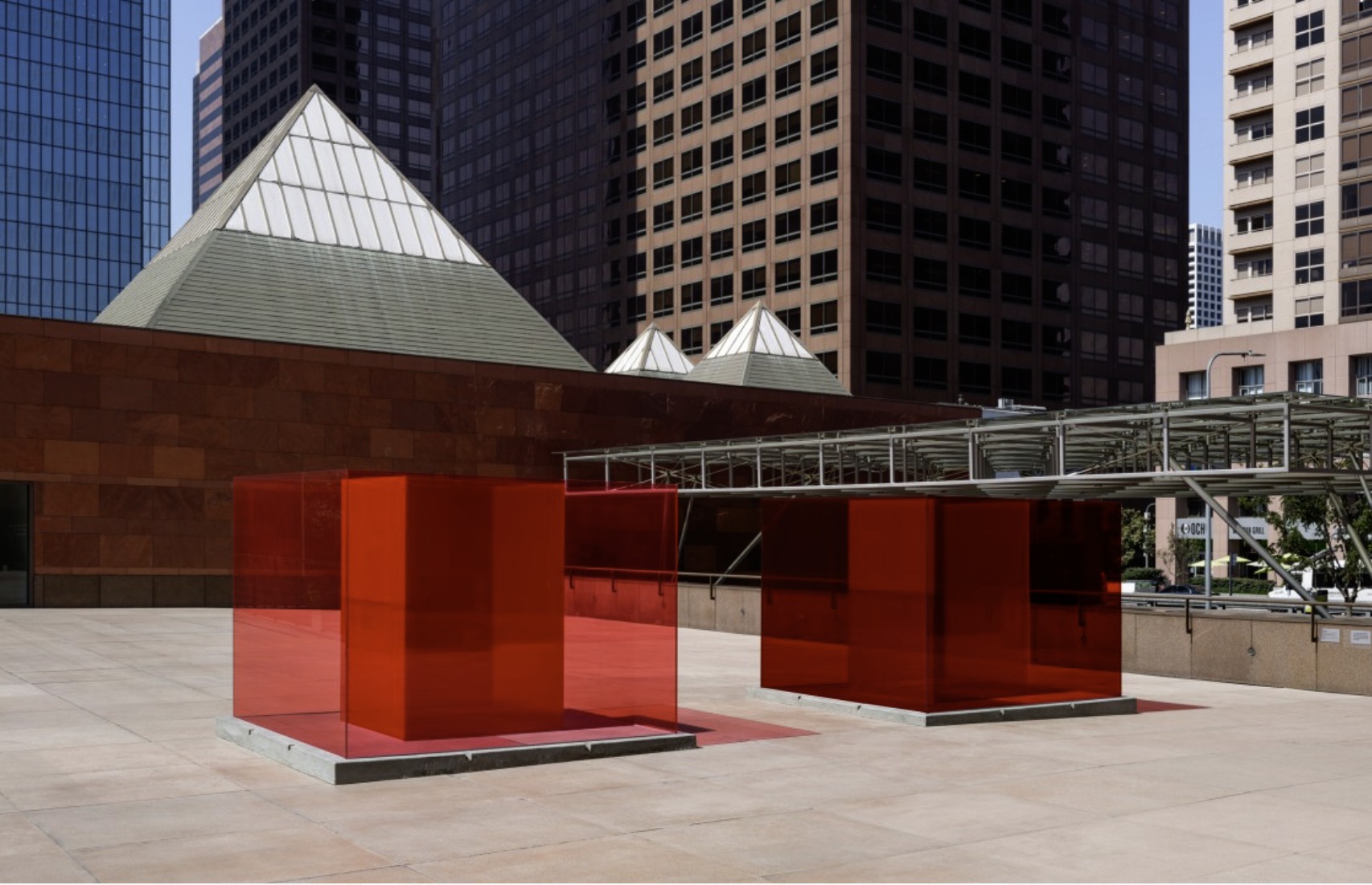 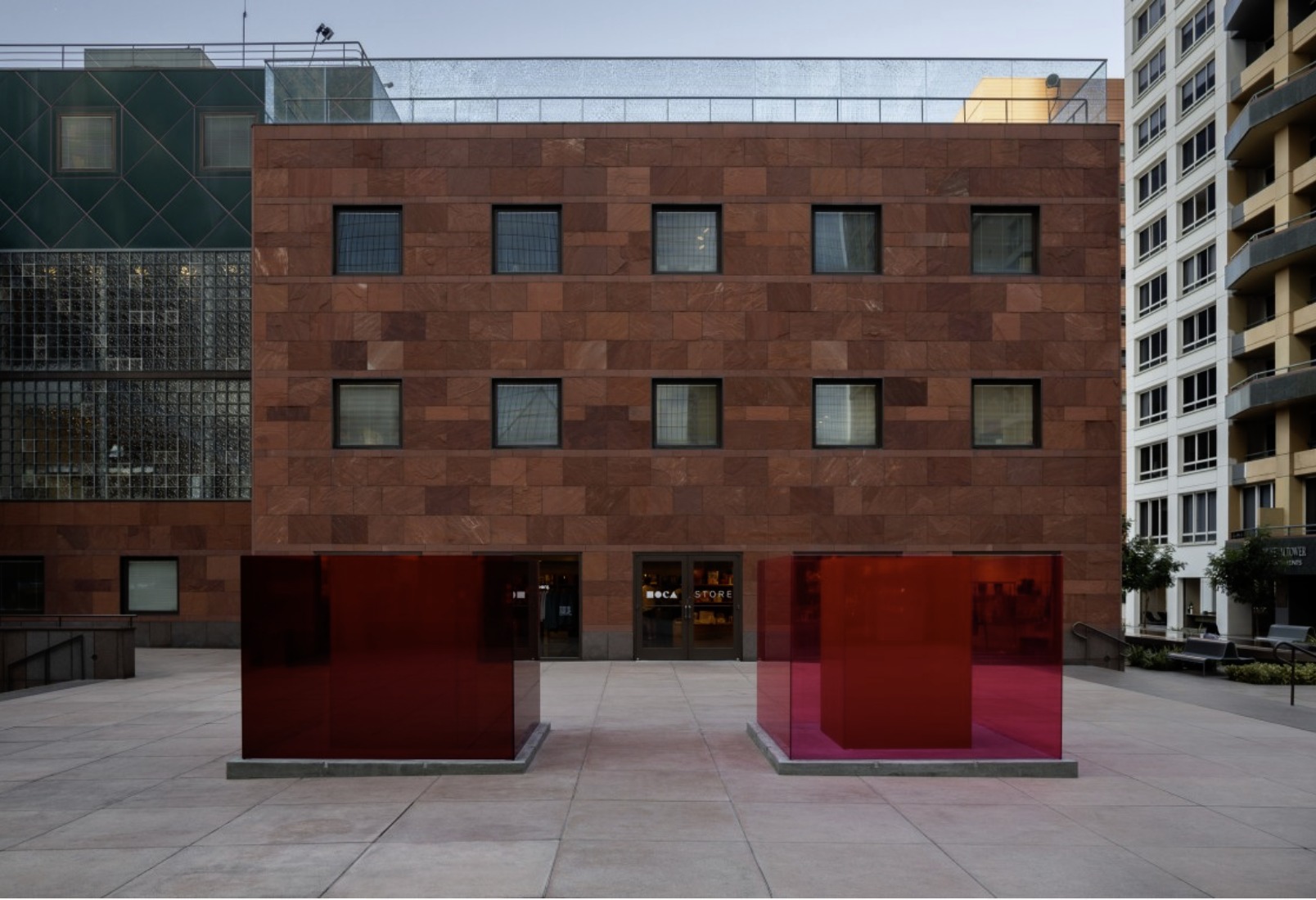 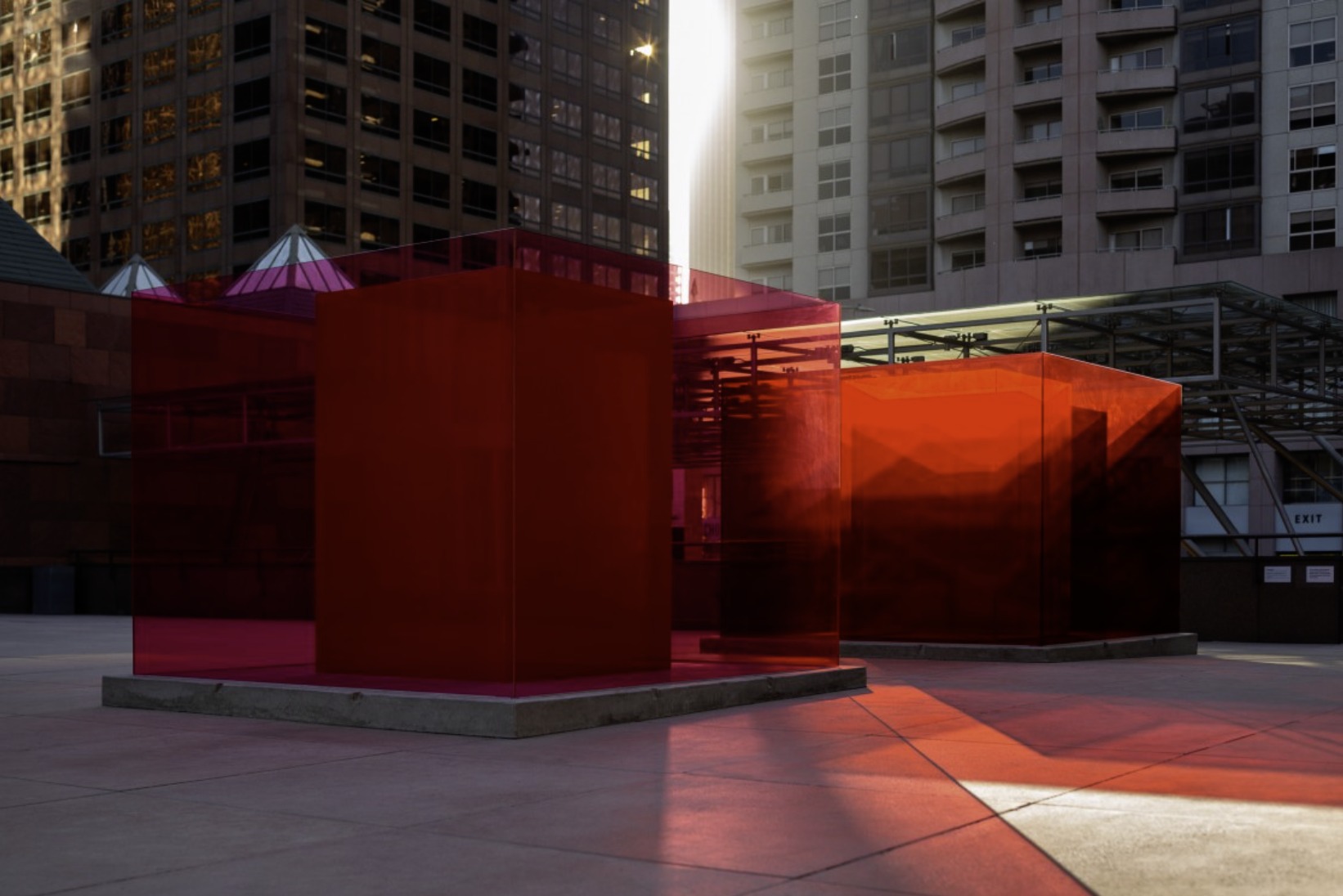 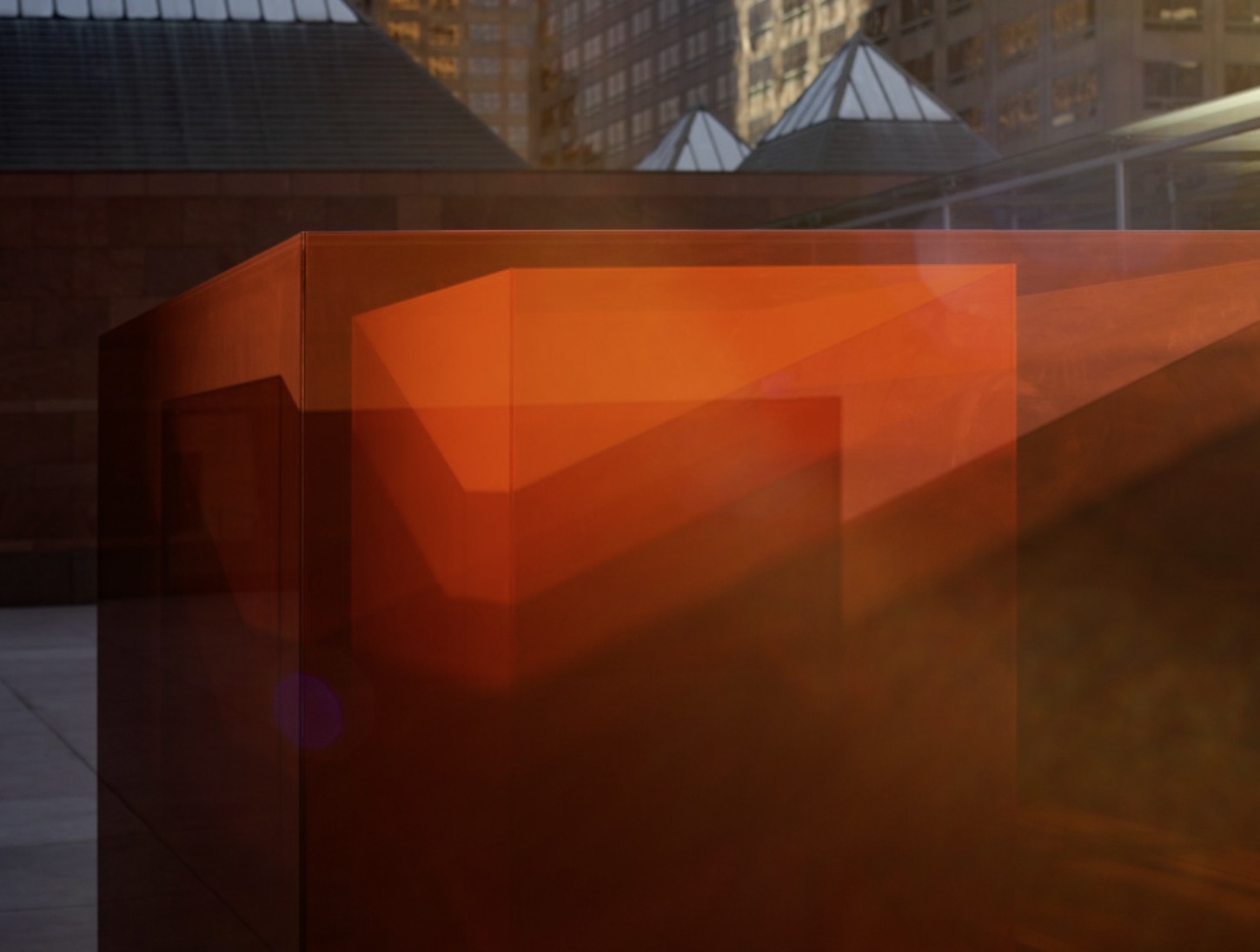 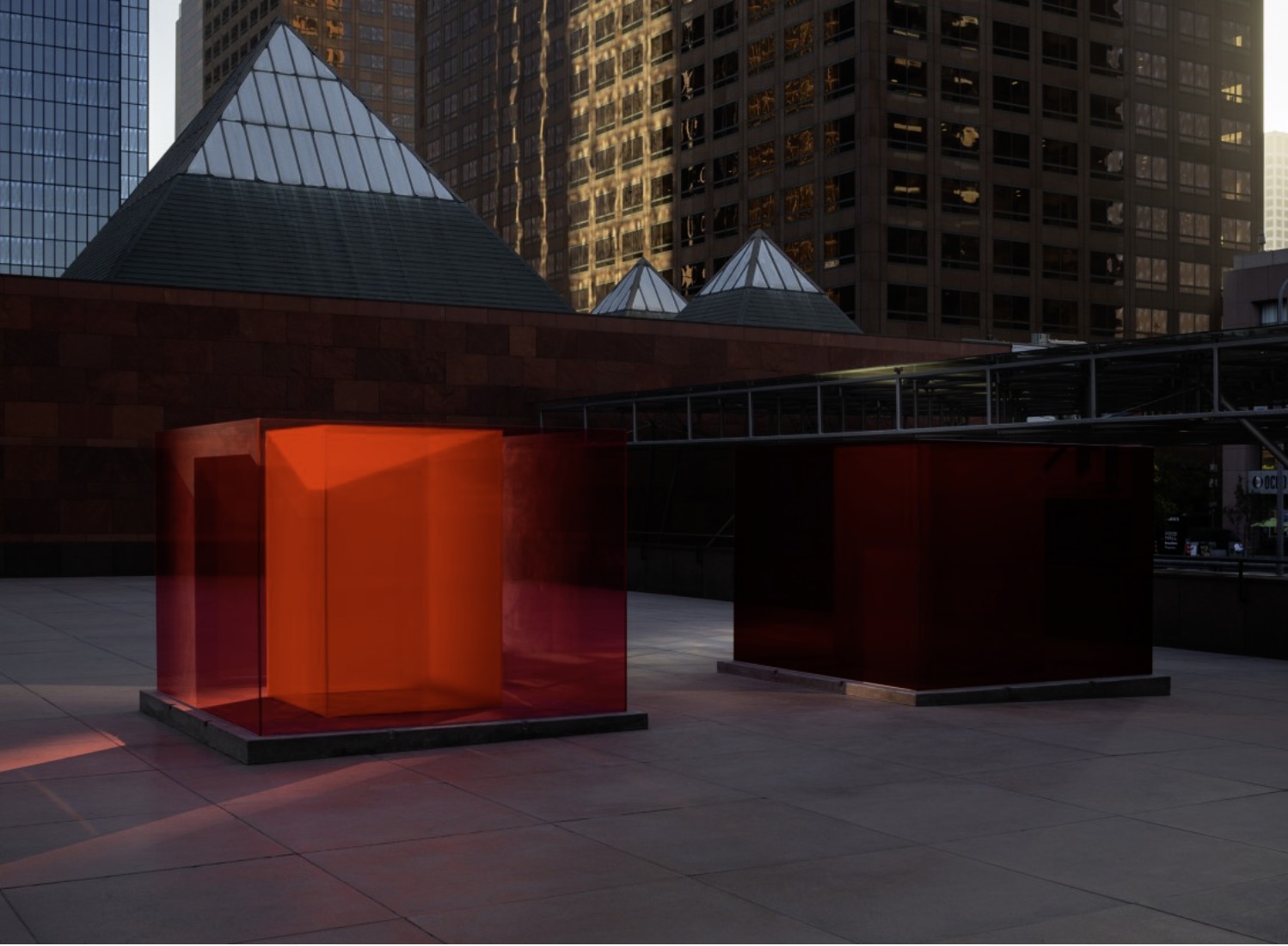 Larry Bell, Bill and Coo at MOCA’s Nest (2019), installation view, MOCA Grand Avenue. Laminated glass, two parts, each 72 x 96 1/4 x 96 1/4 in (182.88 x 244.48 x 244.48 cm). Proposed purchase with funds provided by Carol and David Appel. Image courtesy of The Museum of Contemporary Art. Photo by Zak Kelley.
The Museum of Contemporary Art (MOCA) presents a new outdoor installation by Los Angeles- based artist Larry Bell. Commissioned specifically for the Sculpture Plaza at MOCA Grand Avenue, Bill and Coo at MOCA’s Nest is a signature, space-defining work, at once creating a public art space while also echoing and highlighting the geometric forms that comprise the museum’s Pritzker Prize winning Arata Isozaki-designed building. This installation was generously gifted by MOCA Trustee Carol Appel, who has served on the board for four years, and her husband David Appel.

Bill and Coo at MOCA’s Nest extends Bell’s decades of experimentation with glass. With this work, the pioneering artist long associated with California’s Light and Space movement juxtaposes luminous reds in various saturations, the shades of which are lyrically called habanero, cerise, hibiscus, and carmine. The title refers to the protagonists of 1948’s Bill and Coo, a peculiar and delightful film whose cast is made up entirely of trained birds. The names of the film’s titular lovebirds were in turn drawn from an old-fashioned way to refer to the flirtations of young lovers: within the space of the Sculpture Plaza, a concave hollow defined by the surrounding forms of Isozaki’s architecture, the pair “bill and coo” while nestled in their home in the nest.

In the multi-faceted role Bill and Coo at MOCA’s Nest plays on the Sculpture Plaza, the diptych is akin to Nancy Rubins’ Chas’ Stainless Steel, Mark Thompson’s Airplane Parts, About 1,000 Pounds of Stainless Steel Wire, and Gagosian’s Beverly Hills Space at MOCA (2001), which graced the plaza for many years and is soon to be unveiled in its new location at The Geffen Contemporary at MOCA.

Bell is one of Los Angeles’s most esteemed and celebrated artists; from the sold-out 1965 show at Pace Gallery that established his international reputation to a memorable showing at the 2017 Whitney Biennial, Bell’s impact has been remarkably far-reaching and enduring. He began making his signature glass cubes in the early 1960s and from the beginning experimented freely with a variety of surface treatments to explore and harness the material’s transparency and reflectiveness. Early on, Bell adopted a vacuum deposition process that allowed thin metallic films and other substances to be applied to clear glass, creating a range of surface effects. A methodology drawn from the optics industry and more typically associated with the manufacture of camera lenses and telescopes, this film application process proved remarkably generative for the artist and has endured as a signature technique in his practice.

This sculpture is the seventh work by Bell to enter the museum’s permanent collection, underscoring MOCA’s commitment to collecting Los Angeles-based artists in depth and joining a rich array of works in MOCA’s collection by other artists associated with the Light and Space movement such as Robert Irwin, Craig Kauffman, and James Turrell. MOCA’s holdings by Bell include sculptures, drawings, and mixed media works, but Bill and Coo at MOCA’s Nest is the first commissioned work by the artist to enter the collection, and the largest and most significant of his work within the collection.
www.moca.org