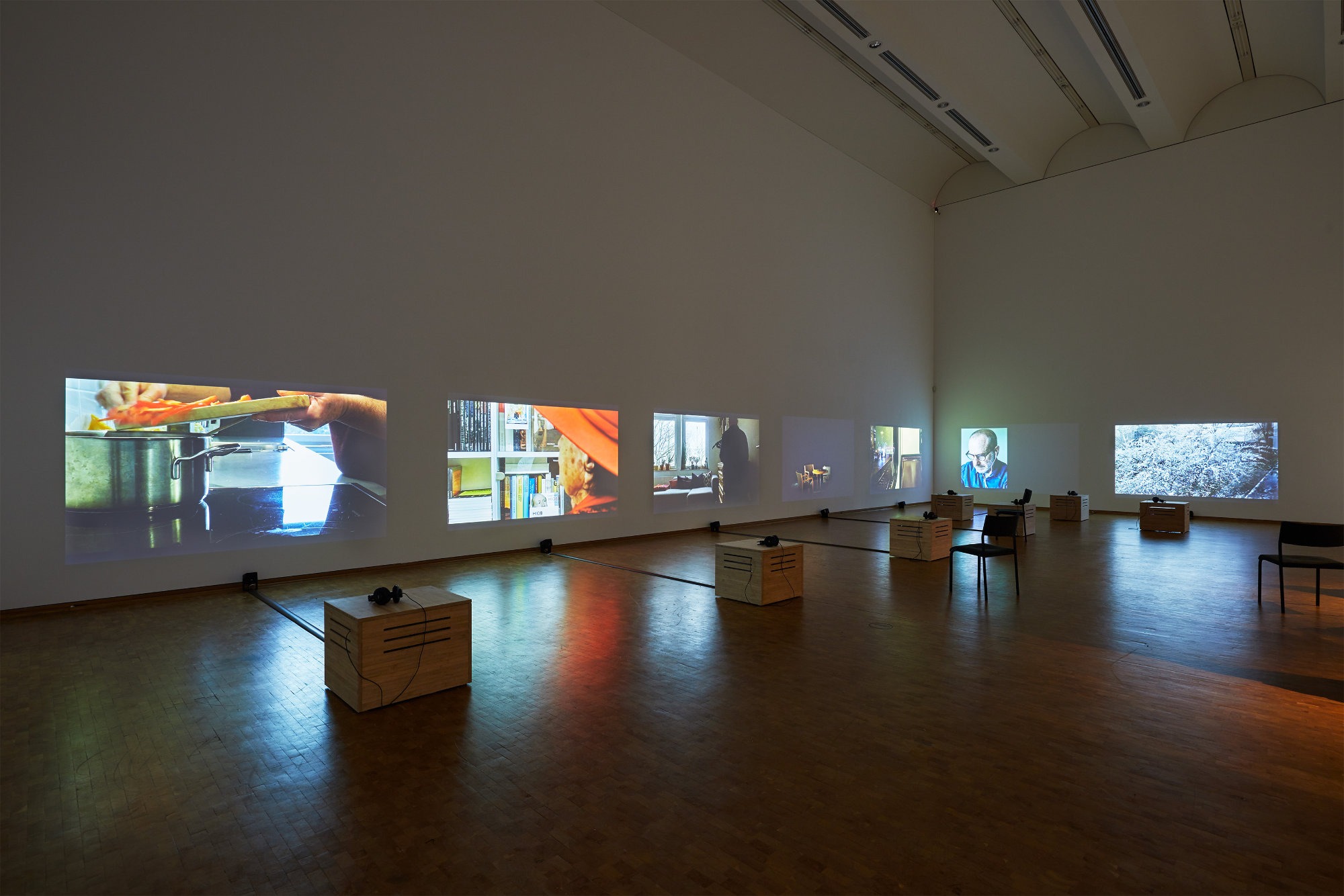 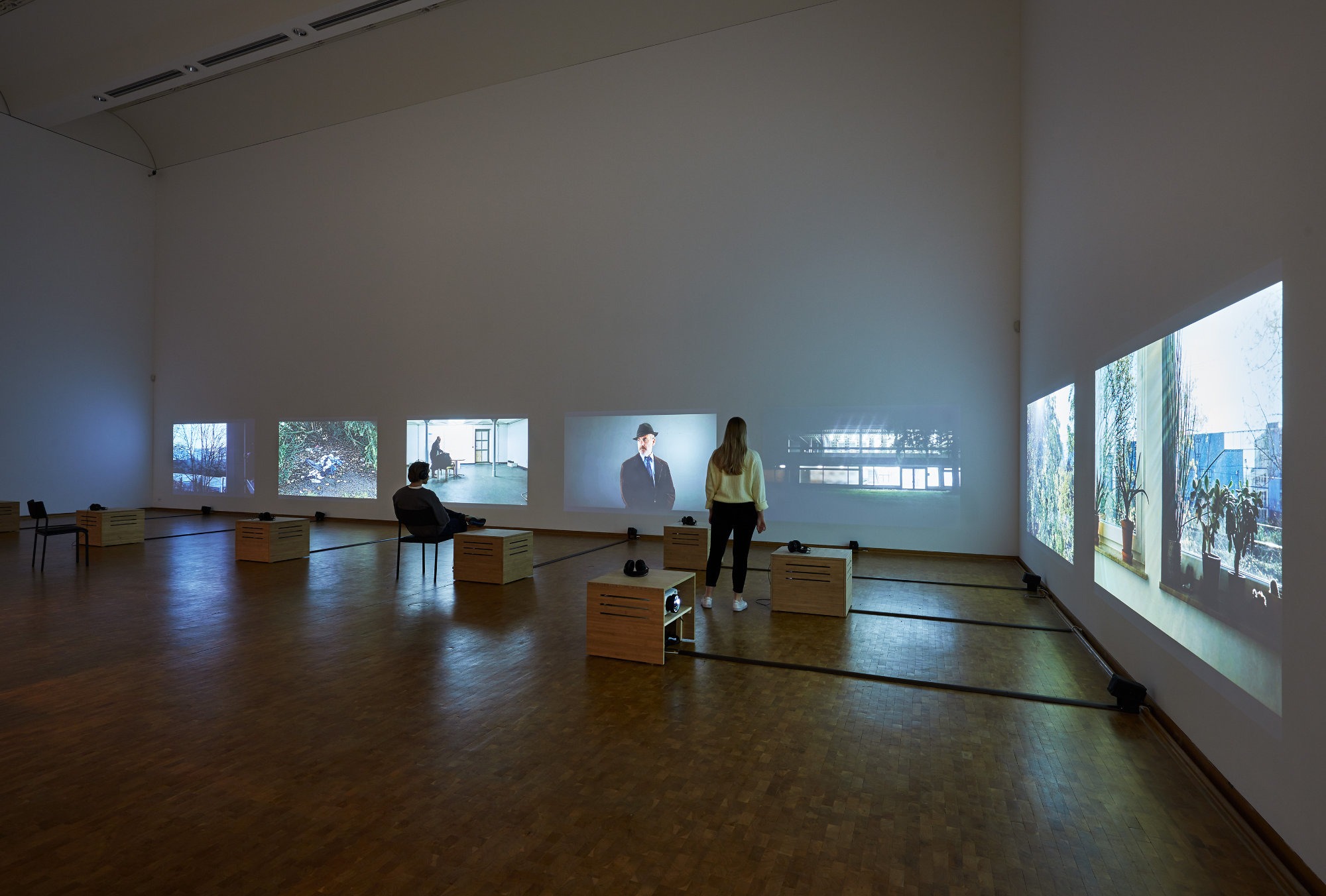 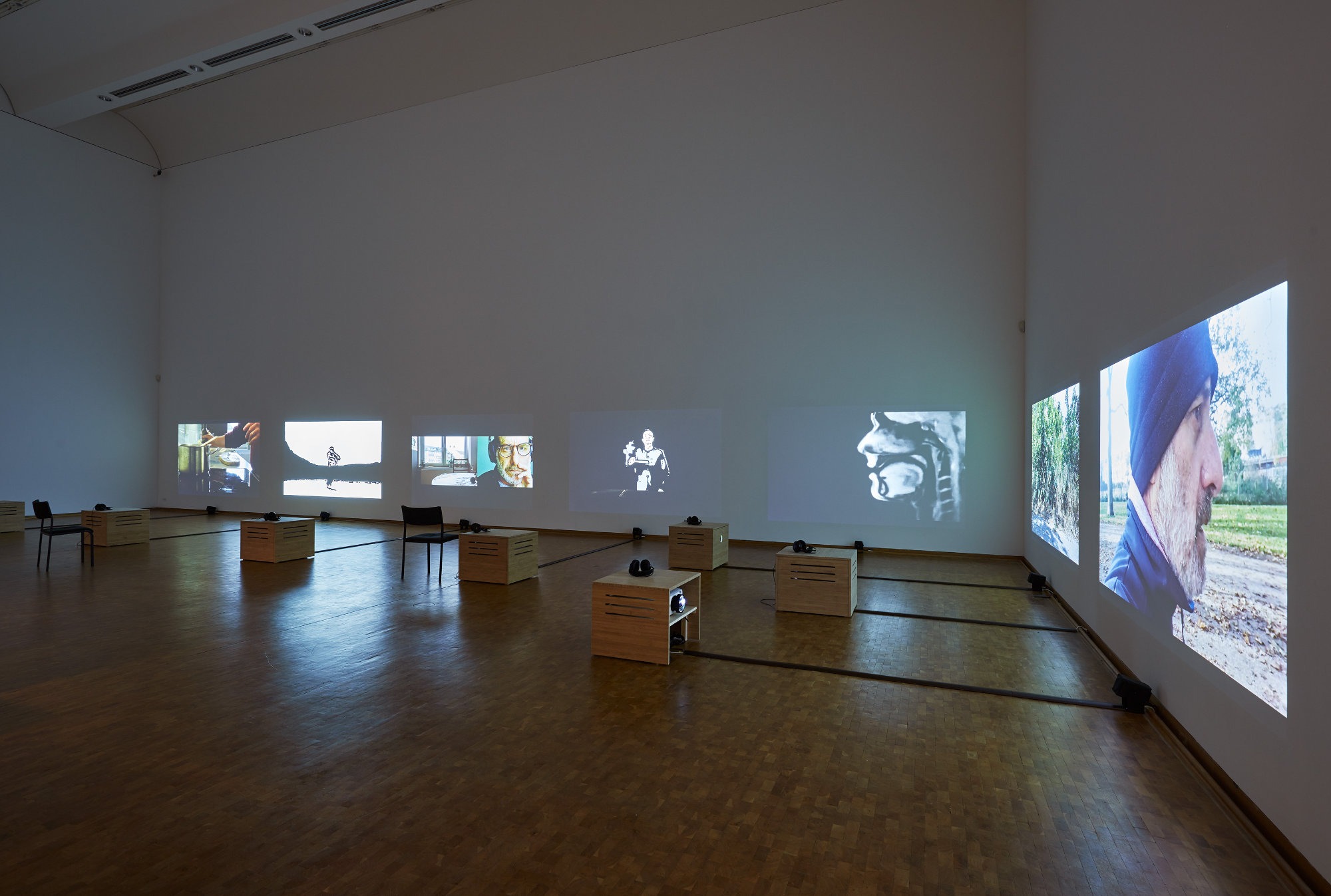 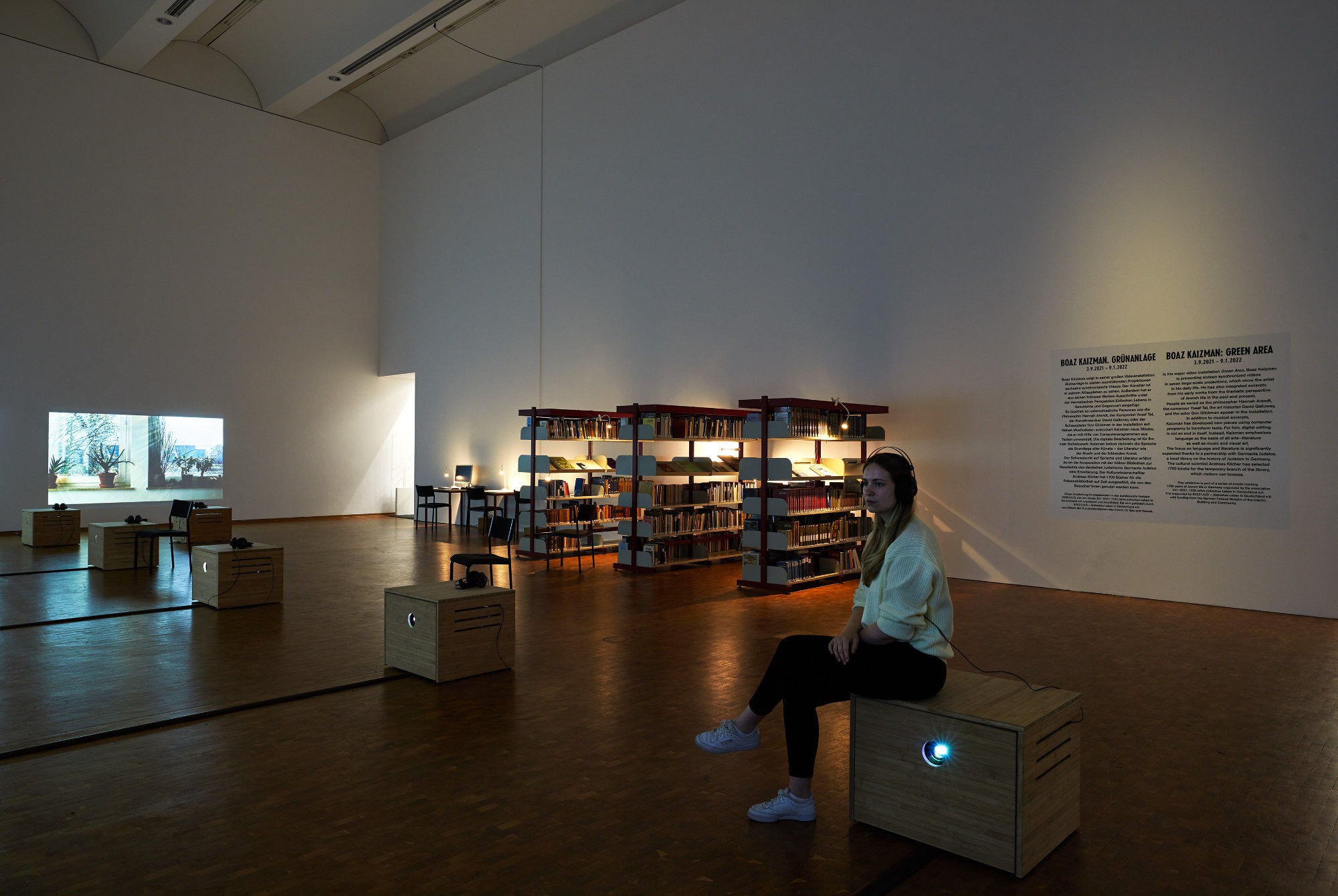 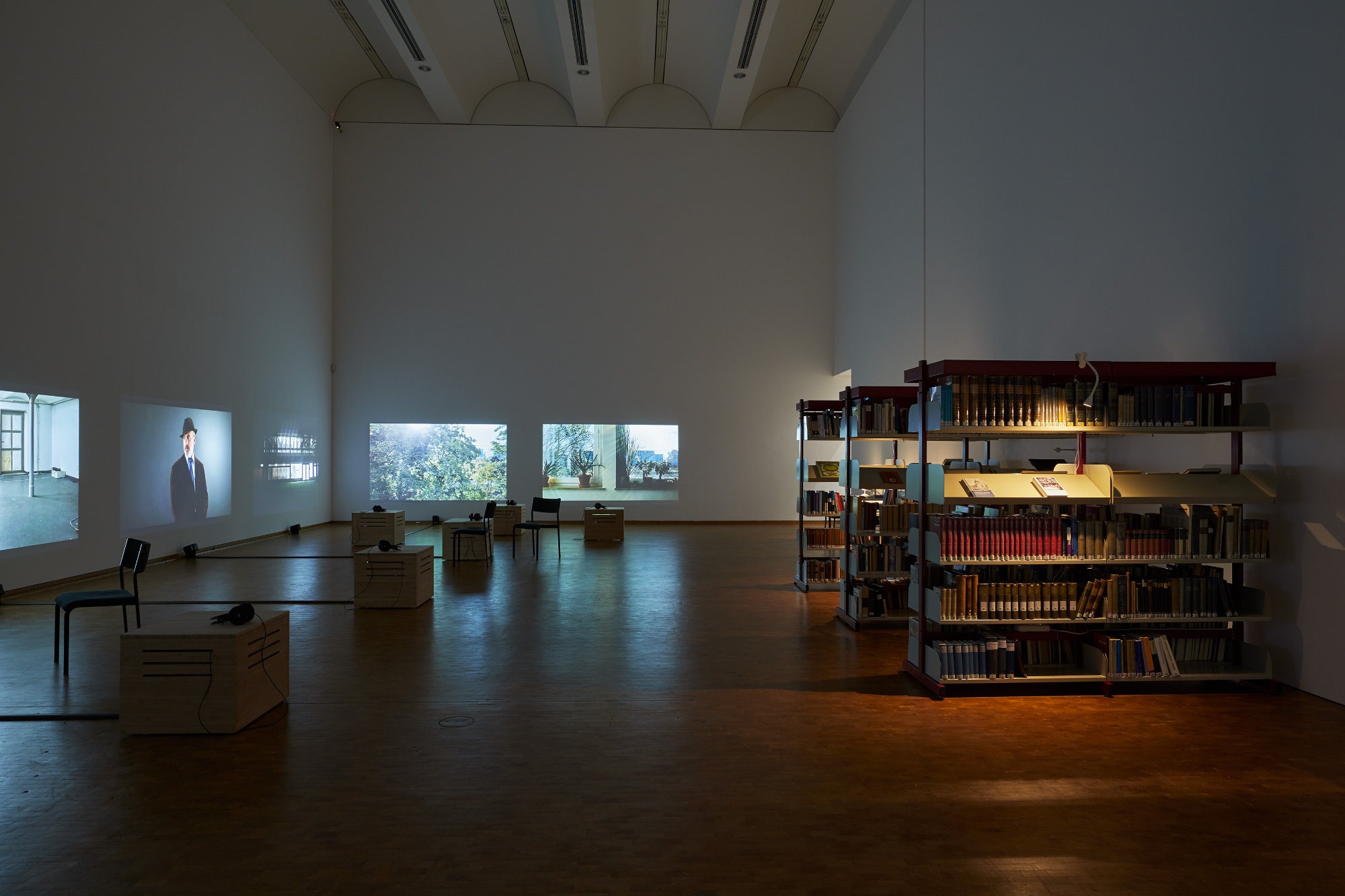 Boaz Kaizman. Grünanlage, 2021. Installation view at Museum Ludwig, Cologne, 2021. Photo: Rheinisches Bildarchiv Köln / Marleen Scholten © Boaz Kaizman
On the anniversary year “2021: 1700 Years of Jewish Life in Germany,” the Museum Ludwig has invited the artist Boaz Kaizman (born in 1962 in Tel Aviv, has lived and worked in Cologne since 1993) to develop a new work. The video installation Grünanlage (Green Area) comprises sixteen new videos in seven large projections across two walls. It will be presented in the large exhibition hall at the Museum Ludwig spanning around 200 square meters.

Selected passages from individual videos can be heard in the exhibition space; at the same time, visitors can listen to the videos using headphones. Landscapes represent a common visual element between the works. Most of these are green areas in Cologne, places of functional and urbanized nature, and thus remain indefinite, between urban and natural space.

Kaizman bases his installation on his own experience. He is shown doing everyday activities—on the way to his studio, preparing meals, or jogging in the park. He also reflects on the artistic process by recapitulating his previous work from the thematic perspective of Jewish life in the past and present and integrating it into the installation in the form of short quotations. Thus, in a mediated way, Jewish life in Germany becomes the self-evident center of Kaizman’s new work without being its explicit topic. With his work, Kaizman inquires into the possibility of memory, the presence of history, and the form in which it is inscribed in life stories.

People as varied as the philosopher Hannah Arendt, the composer Yosef Tal, the art historian David Galloway, and the actor Dov Glickman appear in the individual videos. Pieces of music with an oriental and Sardinian aspect, a romantic folk song, and klezmer music are part of the work. Another piece played in the video by hand werk, an ensemble for new music, turns out to be a poem by Kaizman. The artist transformed it into music using a text-to-speech program and MIDI software, which converts digital signals into sounds. Yet the digital transformation is not an end in itself for the artist. Rather, it shows that language is the basis of all arts, including music and the visual arts.

The focus of the installation on language and literature will be expanded thanks to a partnership with Germania Judaica, a local library on the history of Judaism in Germany. At the invitation of Boaz Kaizman, Andreas Kilcher, a literary and cultural studies professor at ETH Zurich, selected 1700 books of German-language Jewish literature from Germania Judaica. As an independent element of the exhibition, these are located across from the video installation on three shelves from the library, along with tables and chairs. Thus, Germania Judaica, the largest European library on the history and culture of German-language Judaism, will have a branch at the Museum Ludwig for four months. With his homage to the library, Kaizman not only points to the importance of writing and books in Jewish culture; he sees himself as part of this tradition with his visual, literary, and musical work.