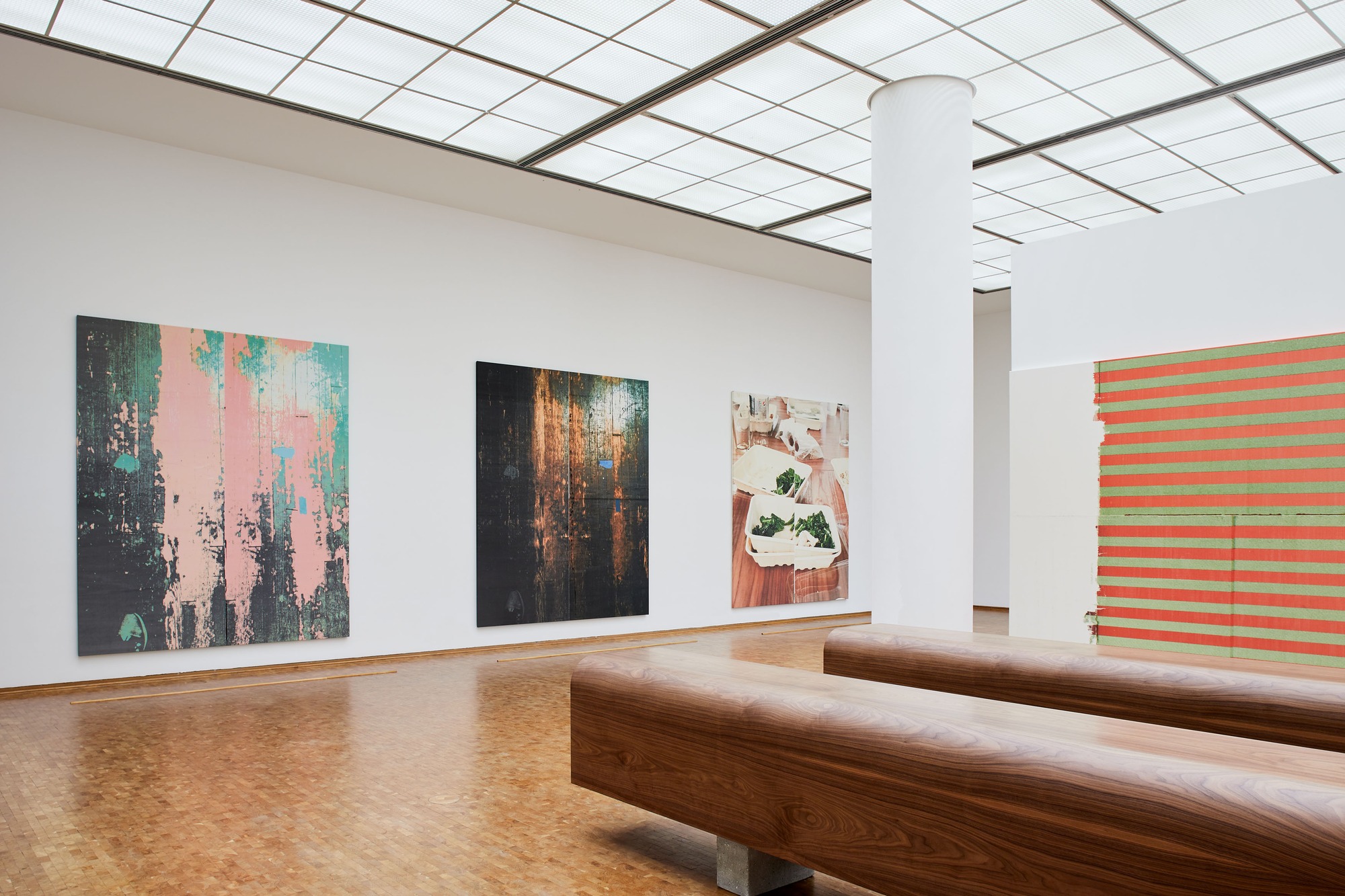 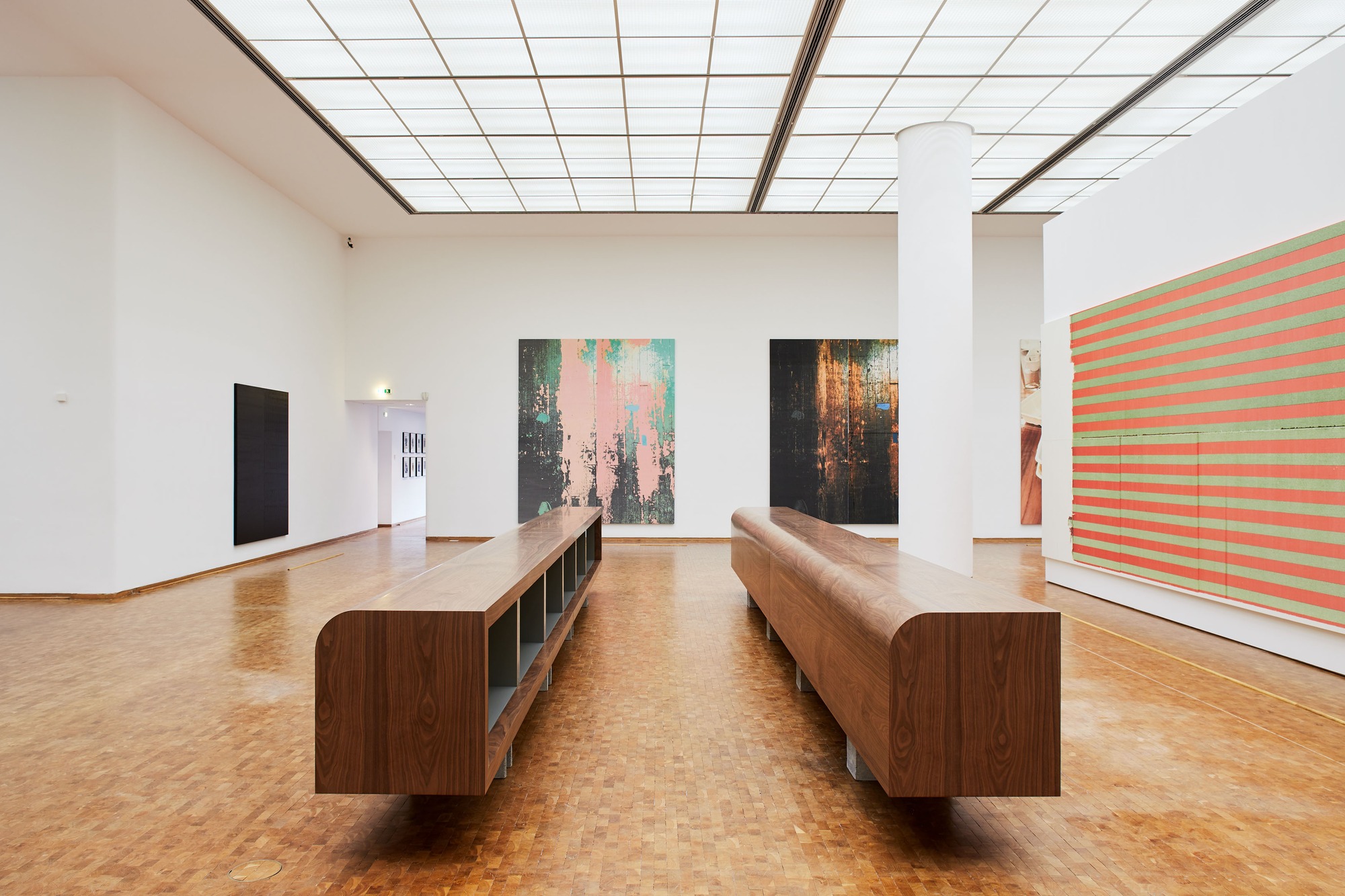 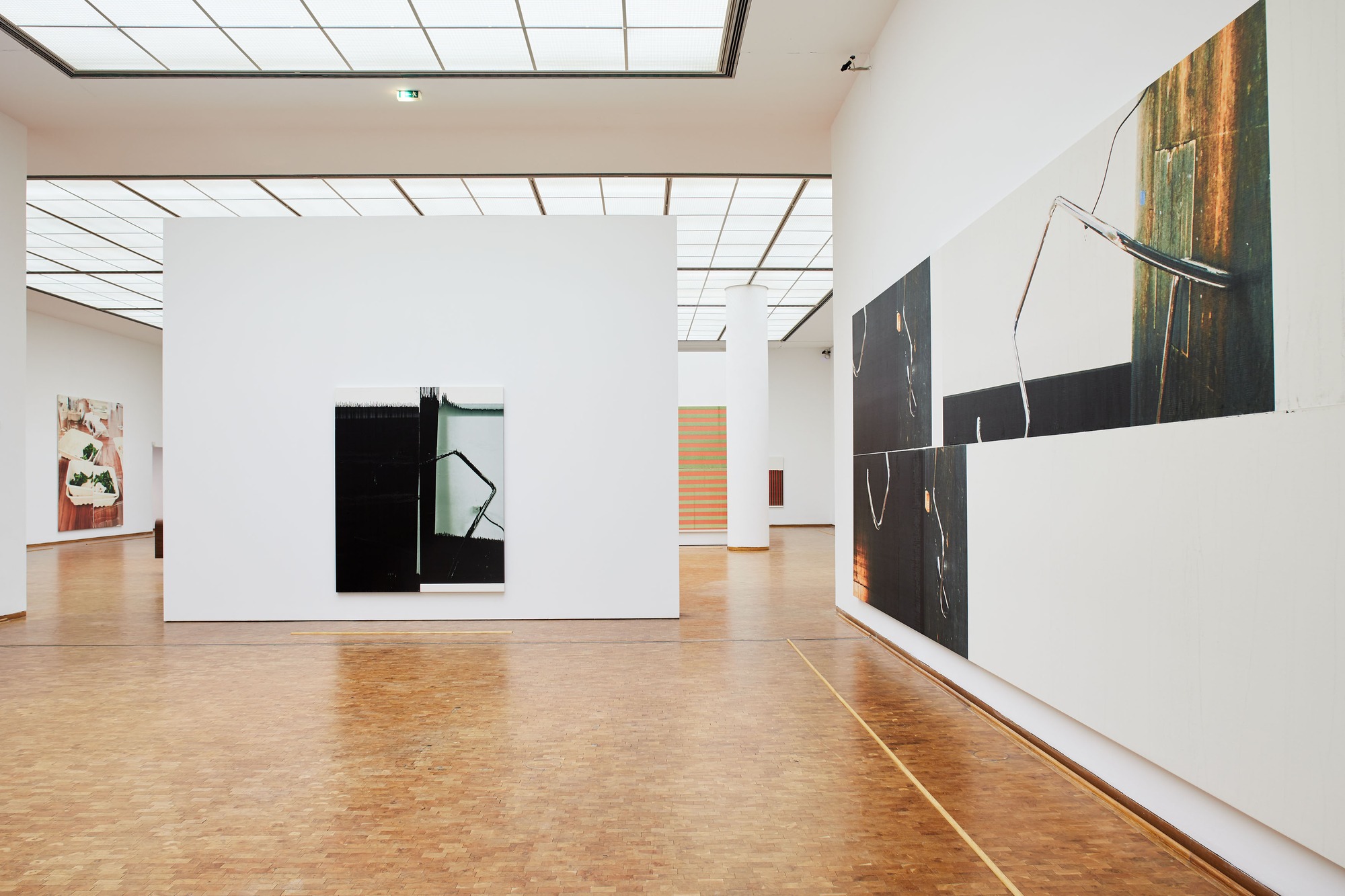 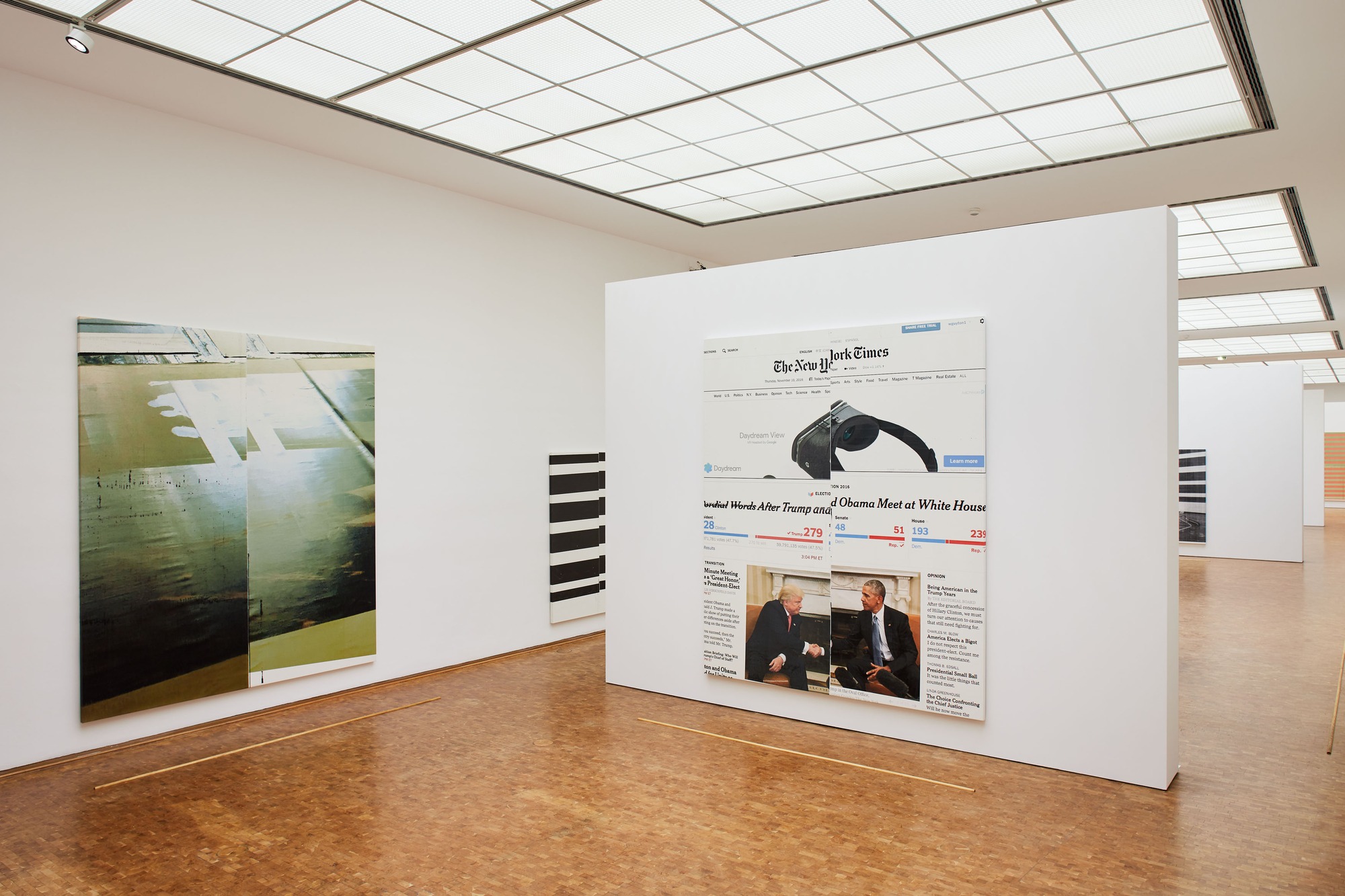 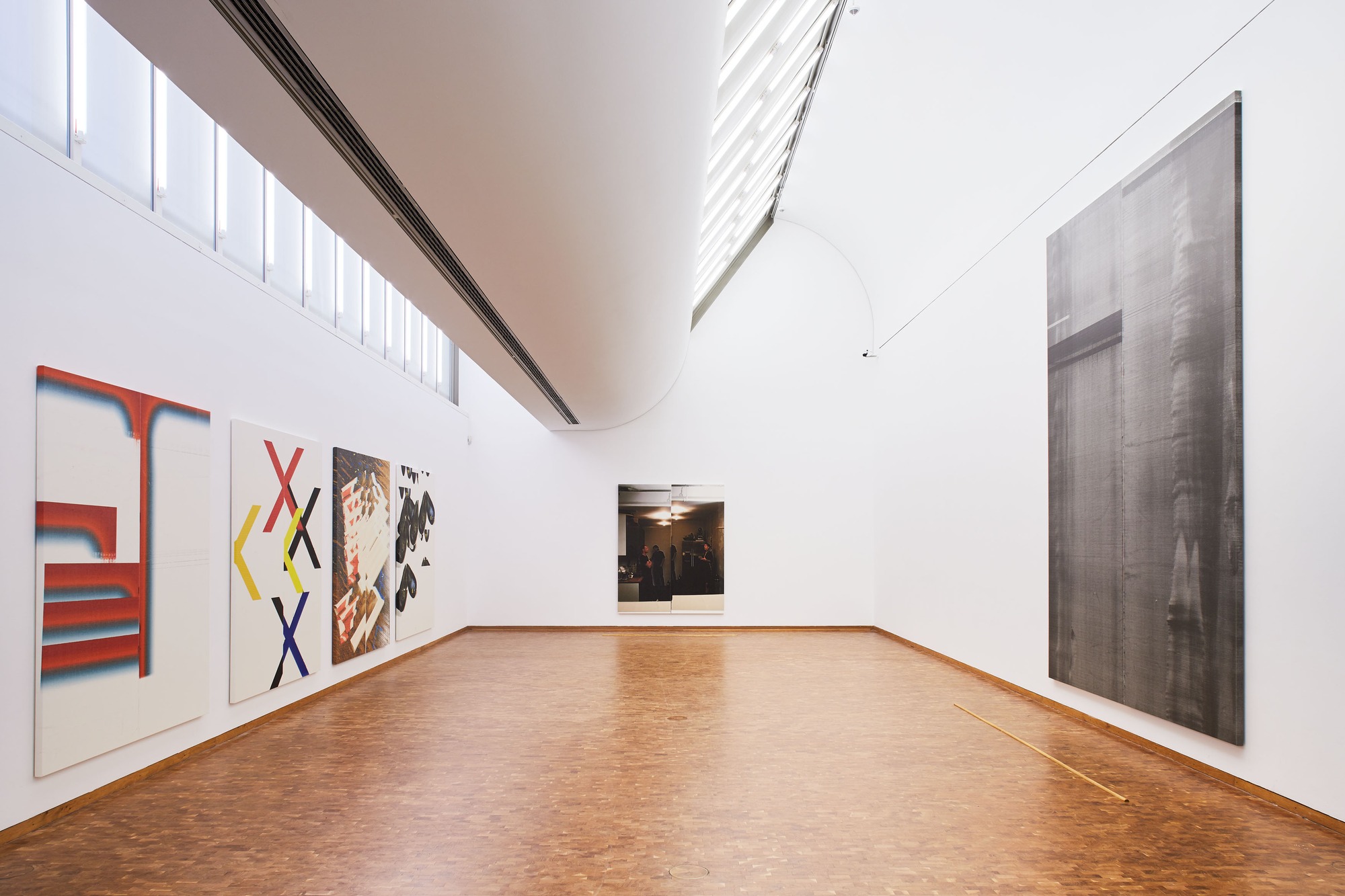 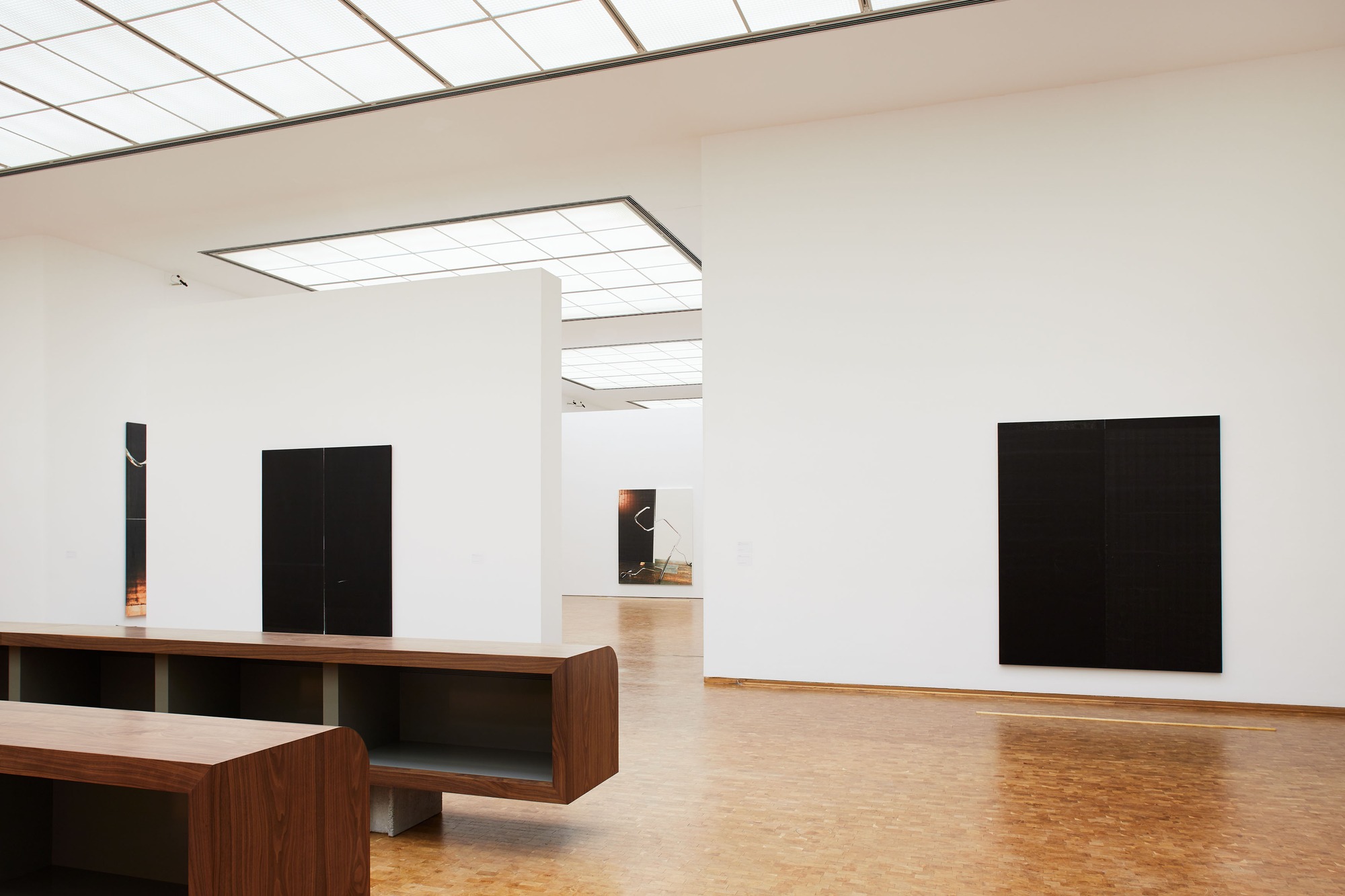 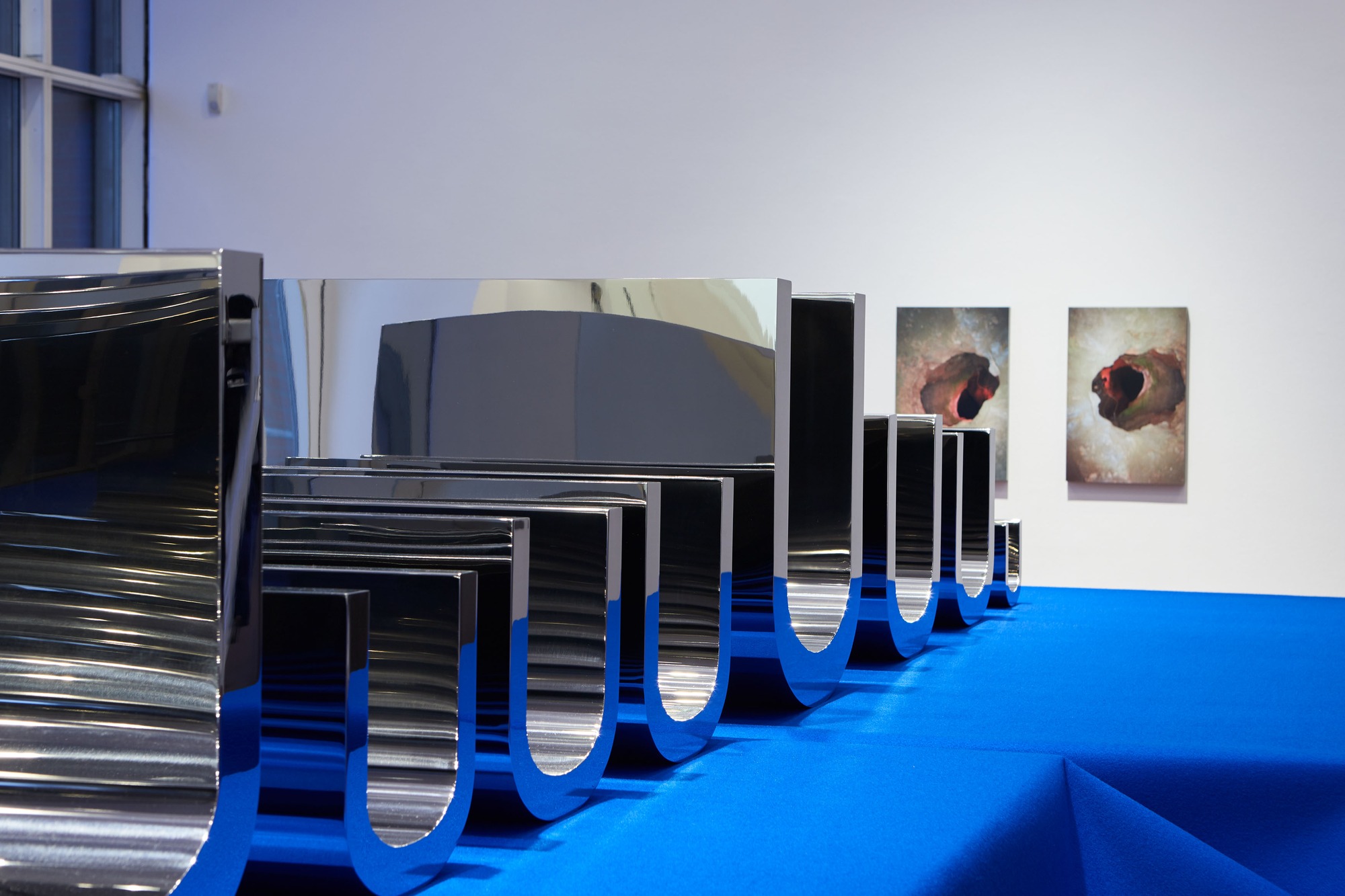 WADE GUYTON: ZWEI DEKADEN MCMXCIX–MMXIX
Installation view at Museum Ludwig, Köln 2019
© Wade Guyton, Foto: Rheinisches Bildarchiv Köln / Marc Weber
Born in 1972, the American artist Wade Guyton has created a consistent and distinct body of work for more than two decades. He is best known for his large-scale canvas paintings made with a conventional inkjet printer, featuring memorable subjects such as flames, the letters X and U, and the New York Times website. After acquiring several of the artist’s works for the collection, the Museum Ludwig is hosting a major survey exhibition that presents his oeuvre from the beginning of his career to his most recent works.

Wade Guyton plays a key role in the artistic engagement with images in the digital age. He combines traditional visual media—such as primed canvas—with digital printing processes so that deliberate degradations lead to aesthetically astonishing results. By appropriating existing images and confronting them with new technologies of reproduction, Guyton has developed an updated form of appropriation art over the past twenty years. While his first inkjet paintings on canvas were initially interpreted in formal-aesthetic terms in regard to a modernist approach, the development of his work shows that even the seemingly abstract patterns of stripes, squares, and circles are rooted in specific digital images.

The exhibition has been developed in close collaboration with the artist. It brings together all the media he uses, from works on paper that Wade Guyton calls “drawings” to photography, sculpture, and his groundbreaking inkjet paintings, spanning the entire space for temporary exhibitions as well as the DC Hall and three adjoining rooms. Instead of presenting the works in chronological order, they are rather arranged into groups according to subject matter or themes, which reveals Guyton’s references to his own work as well as the development of his oeuvre. The earliest works include sculptures made of bent tubular-steel chairs as well as his “drawings,” printed ripped-out pages of art and design catalogues, an extensive selection of which will be presented for the first time. The latest works in the exhibition show the artist’s immediate environment, such as his studio and the urban landscape of New York. The integration of tools and furniture from the studio as well as strategies of sampling found forms and images are striking features of Wade Guyton’s artistic approach, which always adapts to the respective exhibition venue. A new outdoor sculpture on the terrace in front of the south entrance, for example, is not only a bronze cast of an existing work in the exhibition, but also shows aesthetic references to the saw-tooth roof of the museum. For the exhibition, certain adaptations to the museum’s building, such as walls and windows that were covered, will be removed. The bridge to the administrative wing will also be reopened, which will offer a wide-ranging view of the temporary exhibition area at the beginning of the retrospective.

Yilmaz Dziewior, Director of the Museum Ludwig: “The aim of this retrospective is to give a sense of the complexity of Wade Guyton’s oeuvre, showing the artist to be far more than just an exceptional painter. His practice is deeply rooted in a conceptual approach. For all the classicality of his works, with their broad network of references to precursors in the history of art, Guyton always surprises with new and unexpected changes of direction.”

On the occasion of this major retrospective, the Museum Ludwig published a catalogue raisonné of the artist's solo exhibitions with illustrations of all the works on view, accompanied by short texts and room layouts: WADE GUYTON MCMXCIX–MMXIX ZWEI DEKADEN MUSEUM LUDWIG, with texts by Johanna Burton, Michelle Kuo, Kerstin Stakemeier, and a conversation between Yilmaz Dziewior and Wade Guyton, 584 pages, around 1,900 color illustrations, 24.8 × 29.2 cm, in German and English, Verlag der Buchhandlung Walther König, Cologne, 65 euros (retail price), 54 euros (museum price).

Wade Guyton was born in 1972 in Hammond, Indiana, and lives in New York. Recent major institutional solo exhibitions have taken place at the Serpentine Gallery in London (2017/18), the Madre – museo d’arte contemporanea Donnaregina in Naples (2017), the Museum Brandhorst in Munich (2017), the Musée d’art moderne et contemporain (MAMCO) in Geneva (2016), Le Consortium in Dijon (2016), the Kunsthalle Zürich (2013), and the Whitney Museum of American Art in New York (2012), among others.