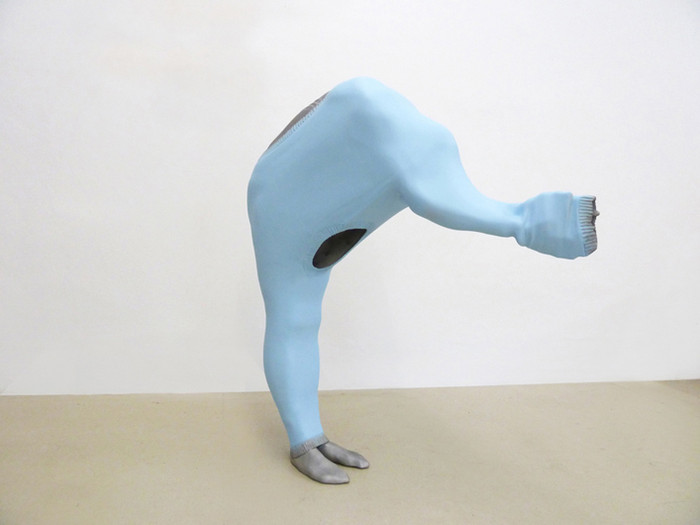 Galerie Thaddaeus Ropac is pleased to present, for the first time in Paris, a comprehensive solo exhibition of new sculptures by the Austrian artist Erwin Wurm.

During the 1990s, Erwin Wurm attracted much attention with his One-Minute Sculptures. Following the artist's instructions, visitors to the exhibition could themselves briefly become sculptures, by taking up often absurd poses frequently involving everyday objects.

Wurm has always concentrated on extending the traditional concept of sculpture, starting from the classic pre-modern premise that sculpture is concerned with the alteration of mass and volume. He takes this premise literally, and applies it to everyday reality: "To change mass and volume is a sculptural act. To gain or lose weight is also a sculptural act." Thus people can themselves become sculptures.

In the early 1990s, Wurm made a video entitled 59 Positions, now in the collections of the Museum Ludwig, Cologne, and the Centre Pompidou, Paris. It shows people taking up specific and unusual positions using a pullover, according to his instructions, then freezing as One-Minute Sculptures. Here the performative is combined with the sculptural. In the present exhibition, the works thus created are represented as monumental sculptures or as groups of sculptures on a greatly reduced scale.

The small sculptures seem to huddle together, to twist themselves round to face outwards. The large sculptures, because of their monumentality, are more static, but they, too, seem to be in a state of dissolution. Here Wurm takes the performative element of the One-Minute Sculptures to a new level of monumentality, nevertheless retaining their processual aspect. The definition of inside and outside is blurred in these works; they can be seen as both inward- and outward-facing. They look compact and self-contained; we can put ourselves in their place, but we cannot empathise with them.

Erwin Wurm's sculptures are often defined by their shell, the outline that circumscribes their volume. This may be a suit, or a pullover. Originally, the artist used to pull garments over simple wooden plinths, thus converting them into sculptures. In his latest works, the box shape of the plinth is sometimes still visible. What in the One-Minute Sculptures was a person, later became a plinth, and is now a hybrid form.

The oversized police cap in the exhibition becomes a complete sculpture only when a viewer stands underneath it; the head disappears, so that the cap seems to sit directly on the torso, rendering the person anonymous. This is reminiscent of a child trying on its parents' clothes to assume an adult role, which it cannot fulfil.

Erwin Wurm will install an enormous "knitted wall", which reintroduces a previous work on a smaller scale, titled, like the exhibition, Yes Biological (43 x 85 cm), which also deals with the expanded concepts of sculpture and painting. The exhibition area becomes the canvas, a mural (in the literal sense) is created, and we are uncertain as to whether it should be called a picture or a sculpture.