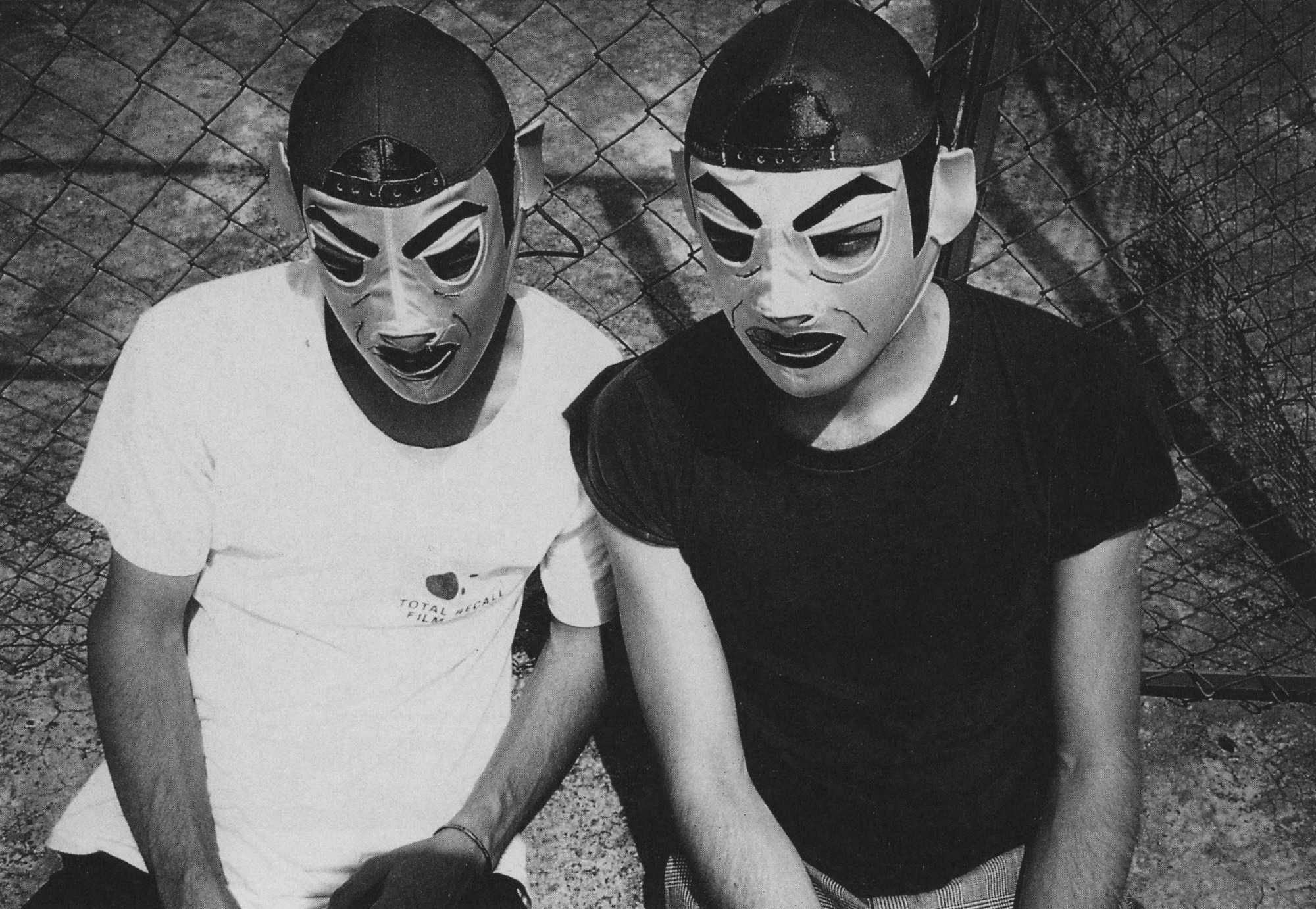 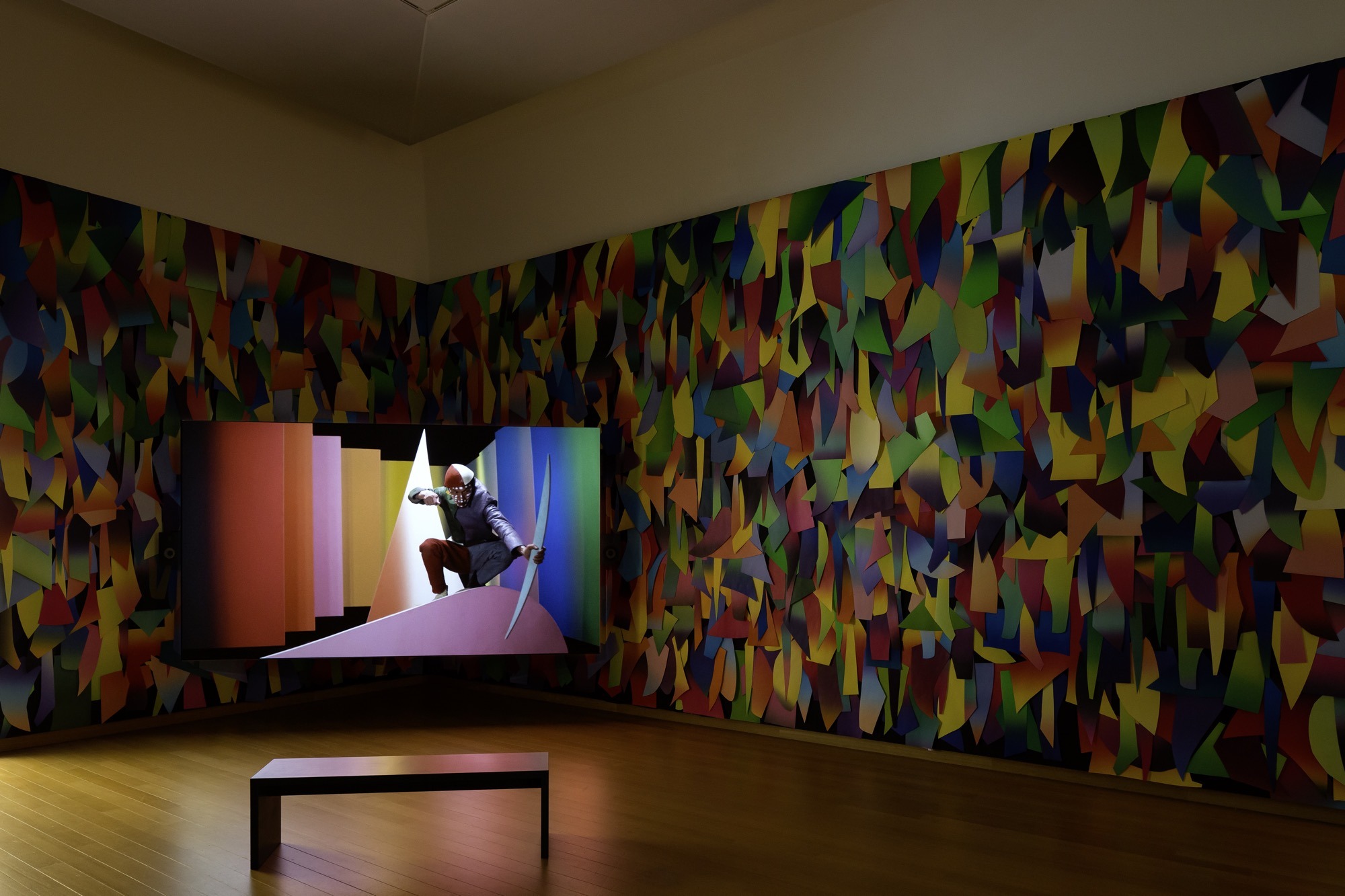 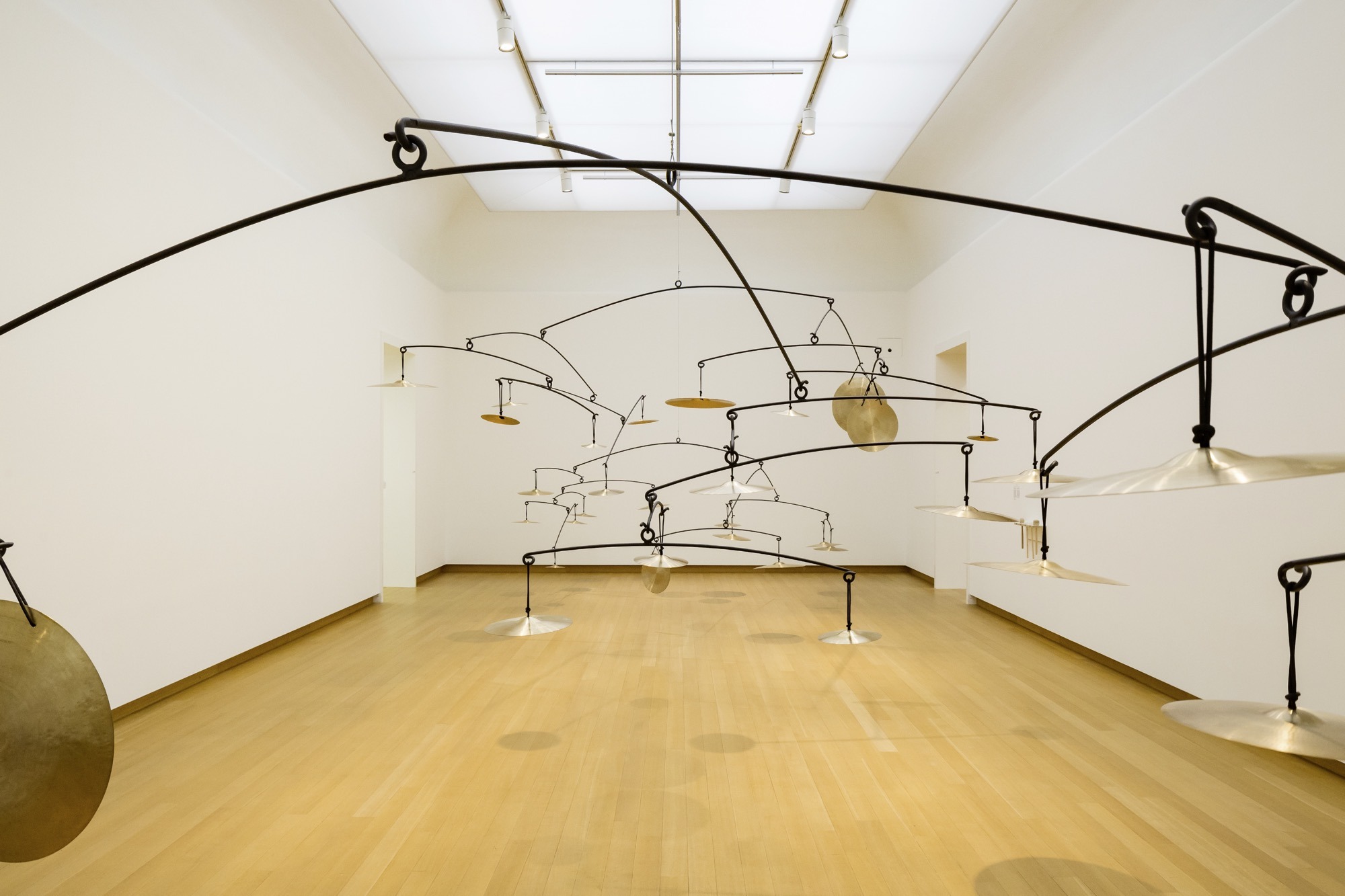 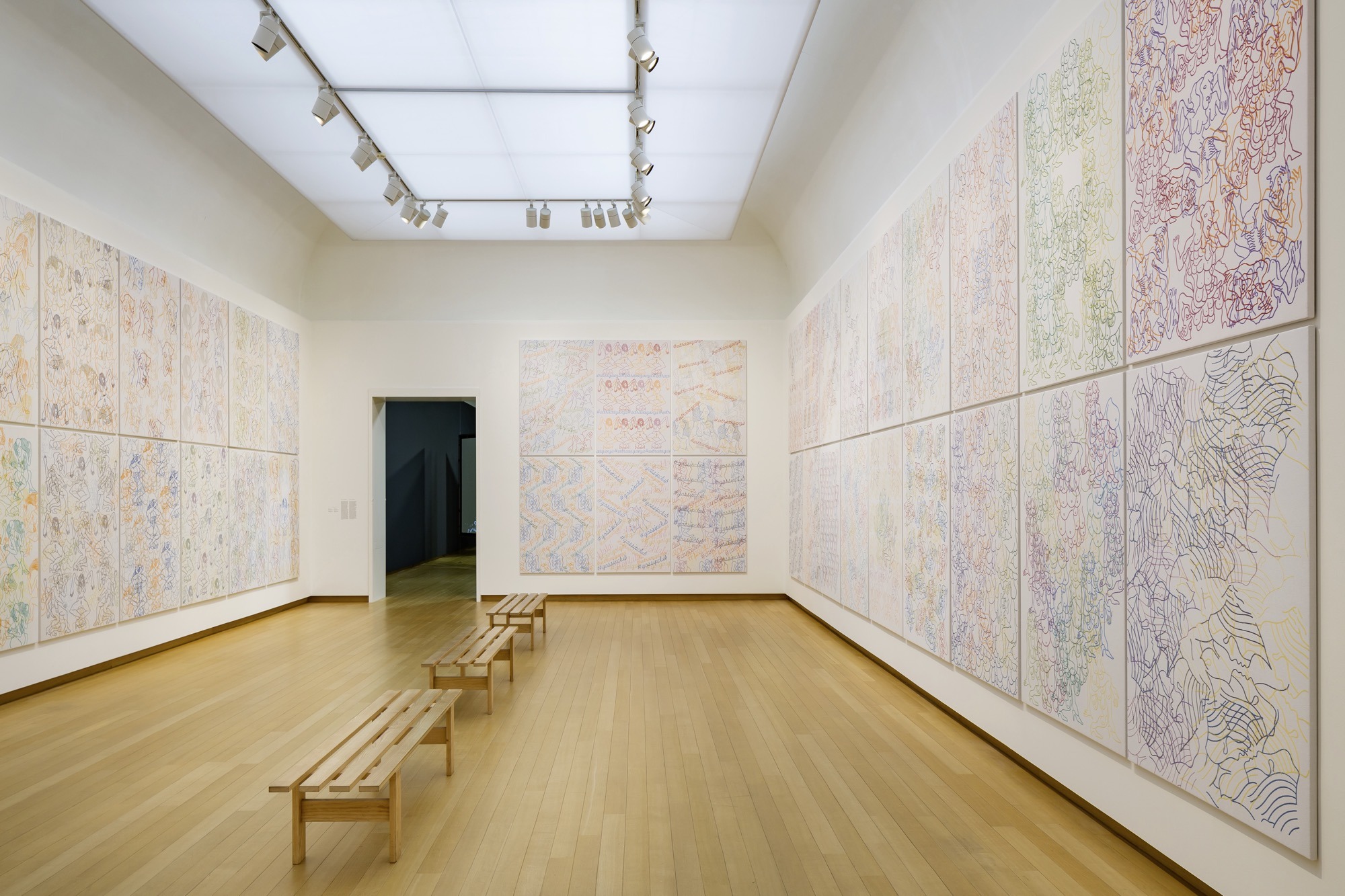 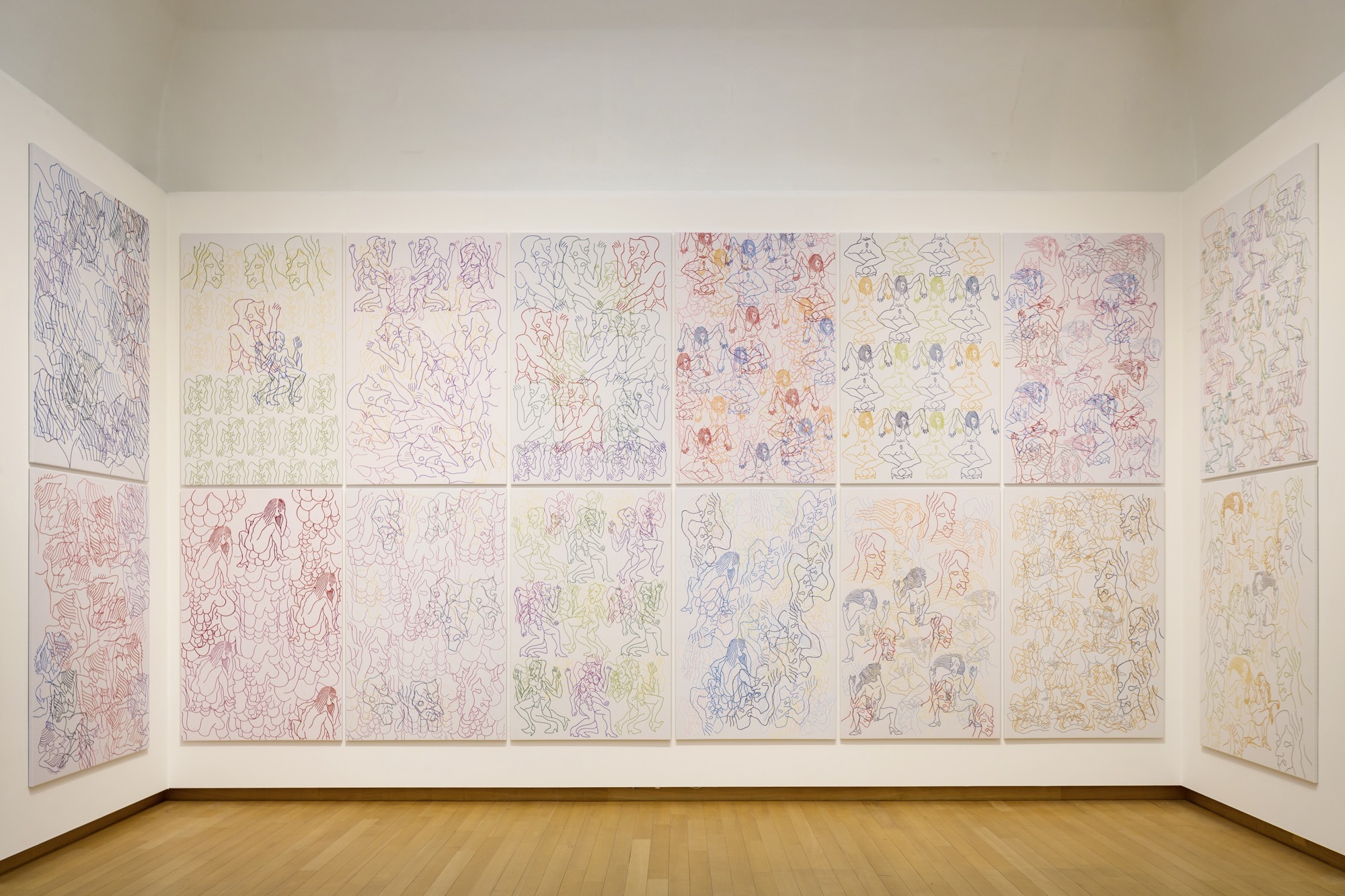 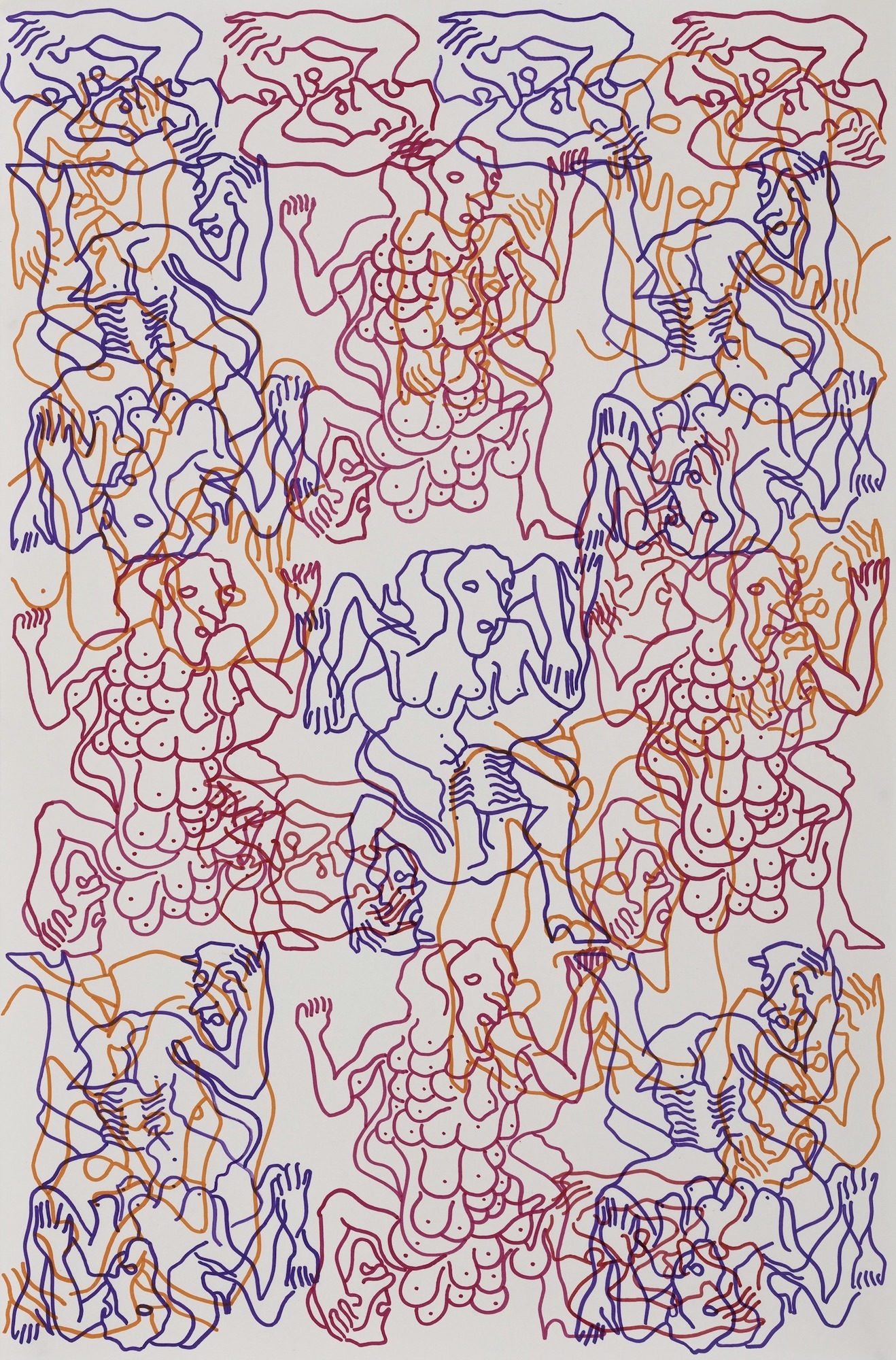 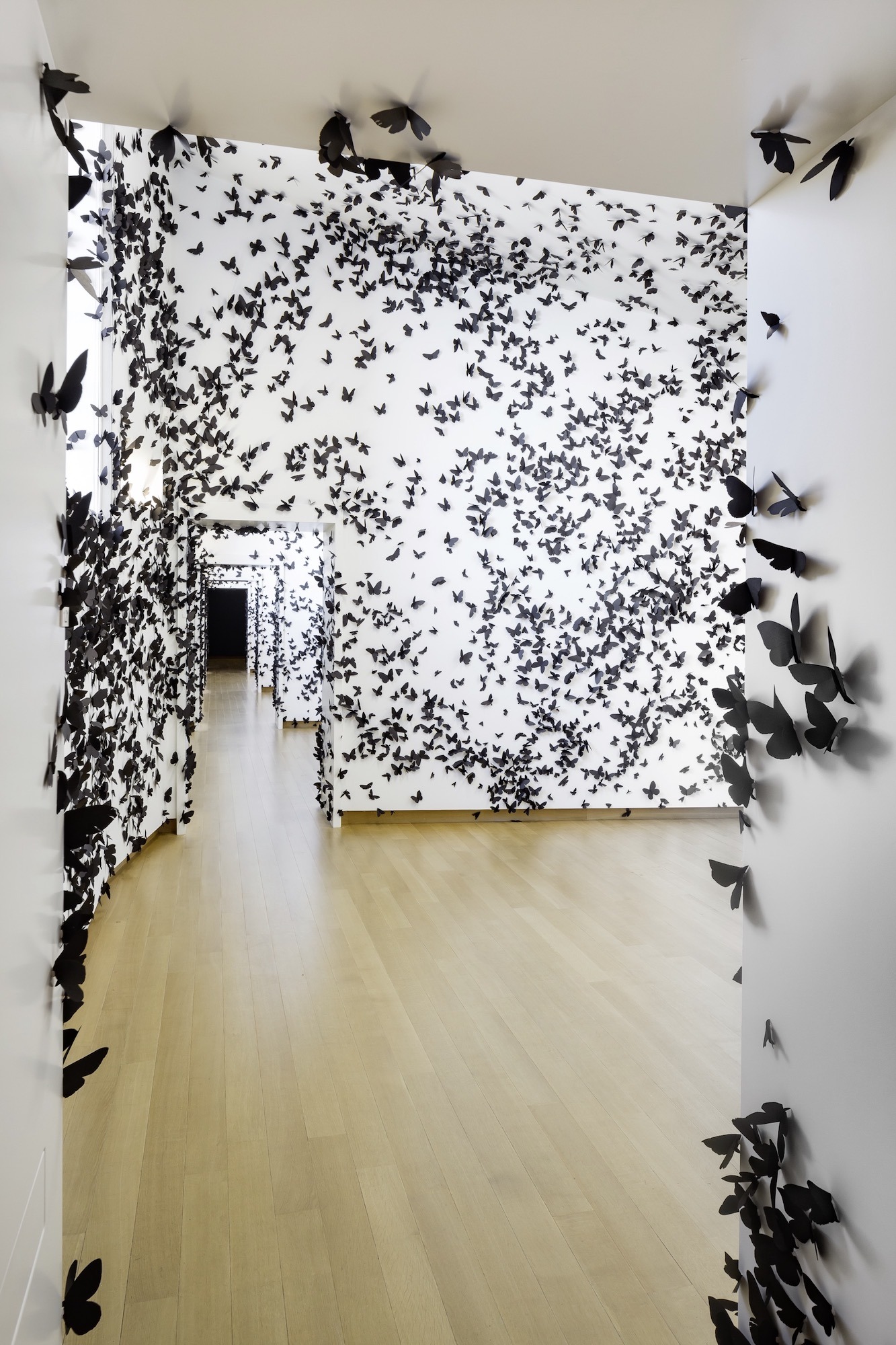 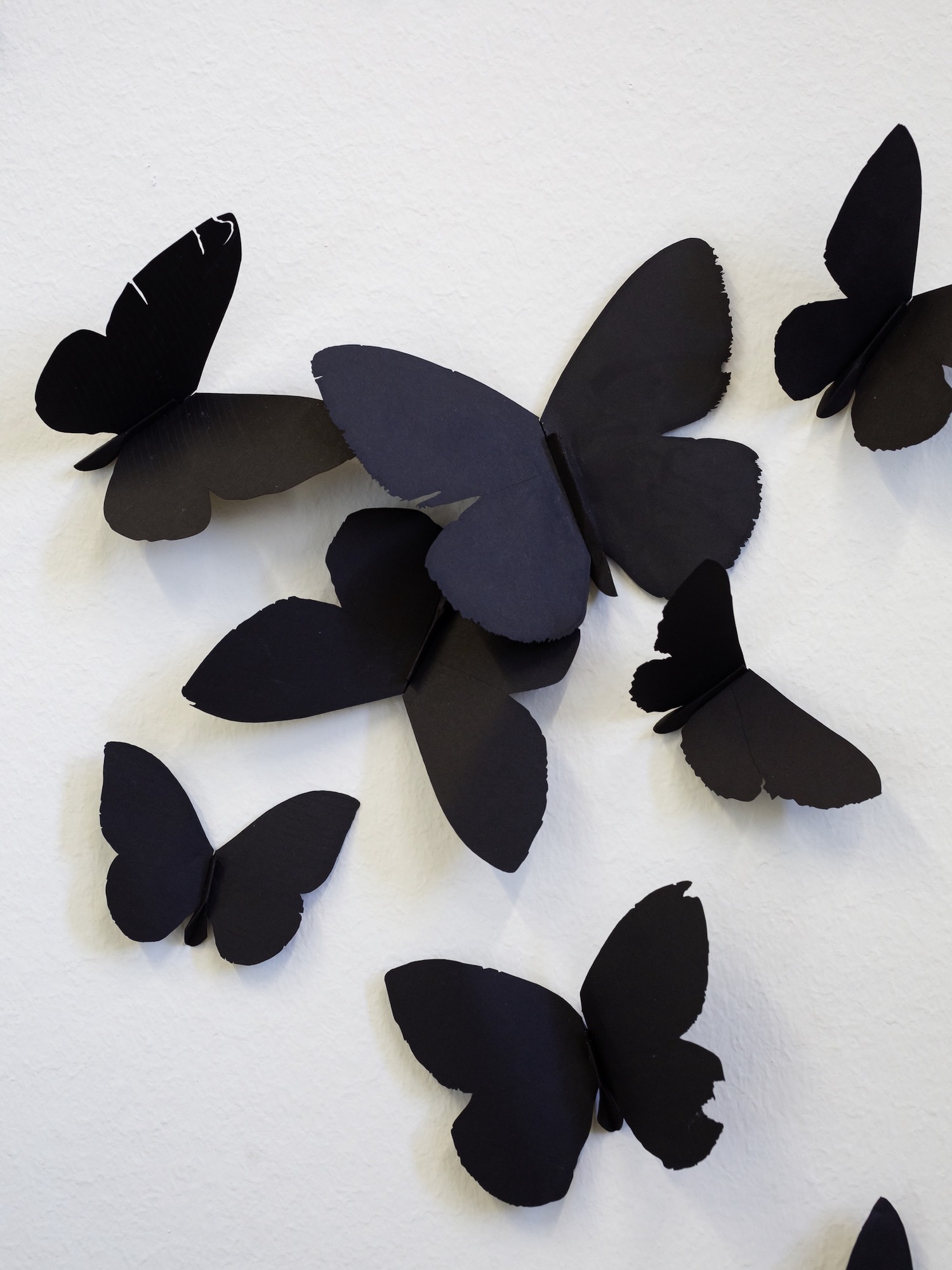 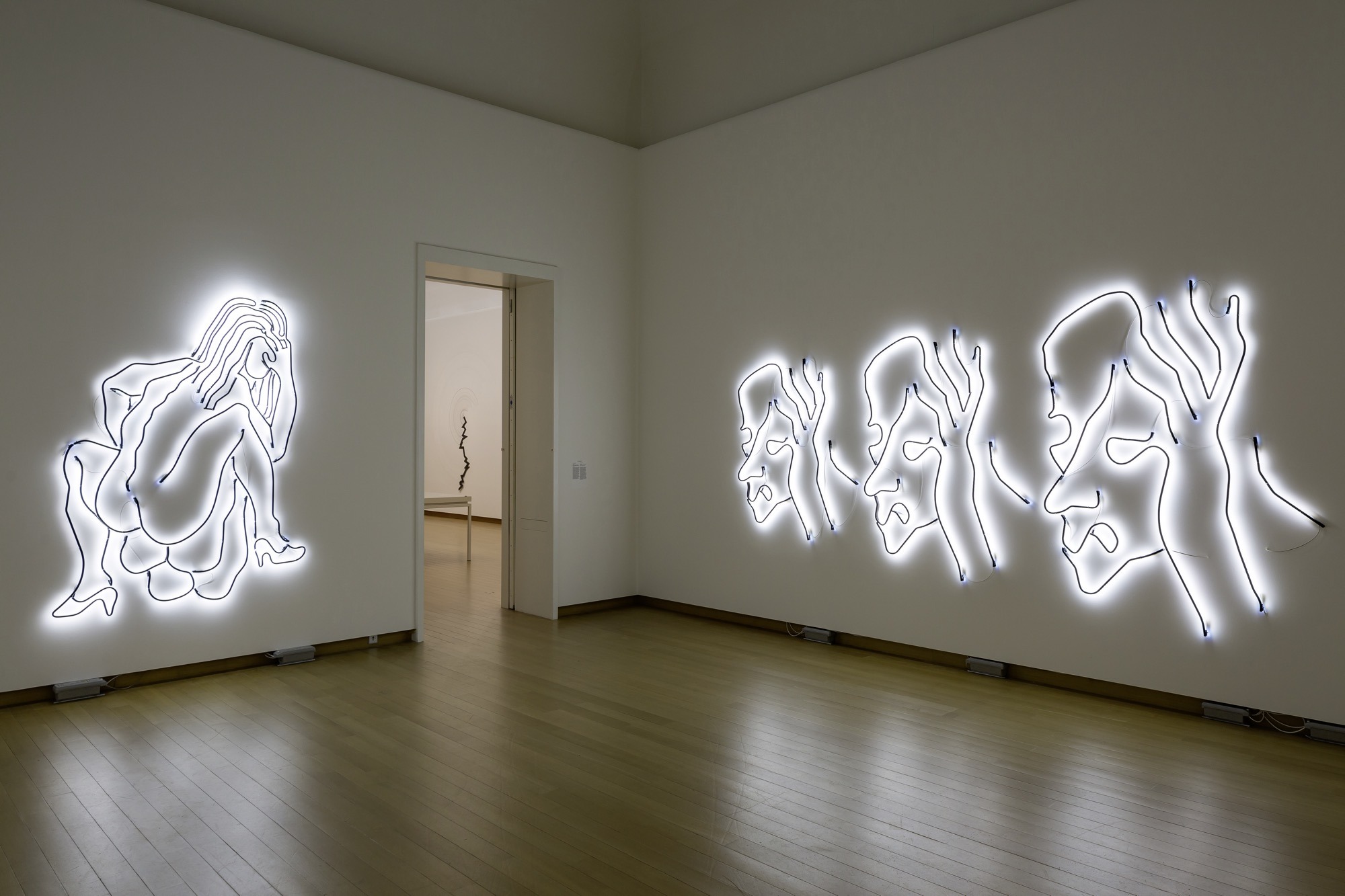 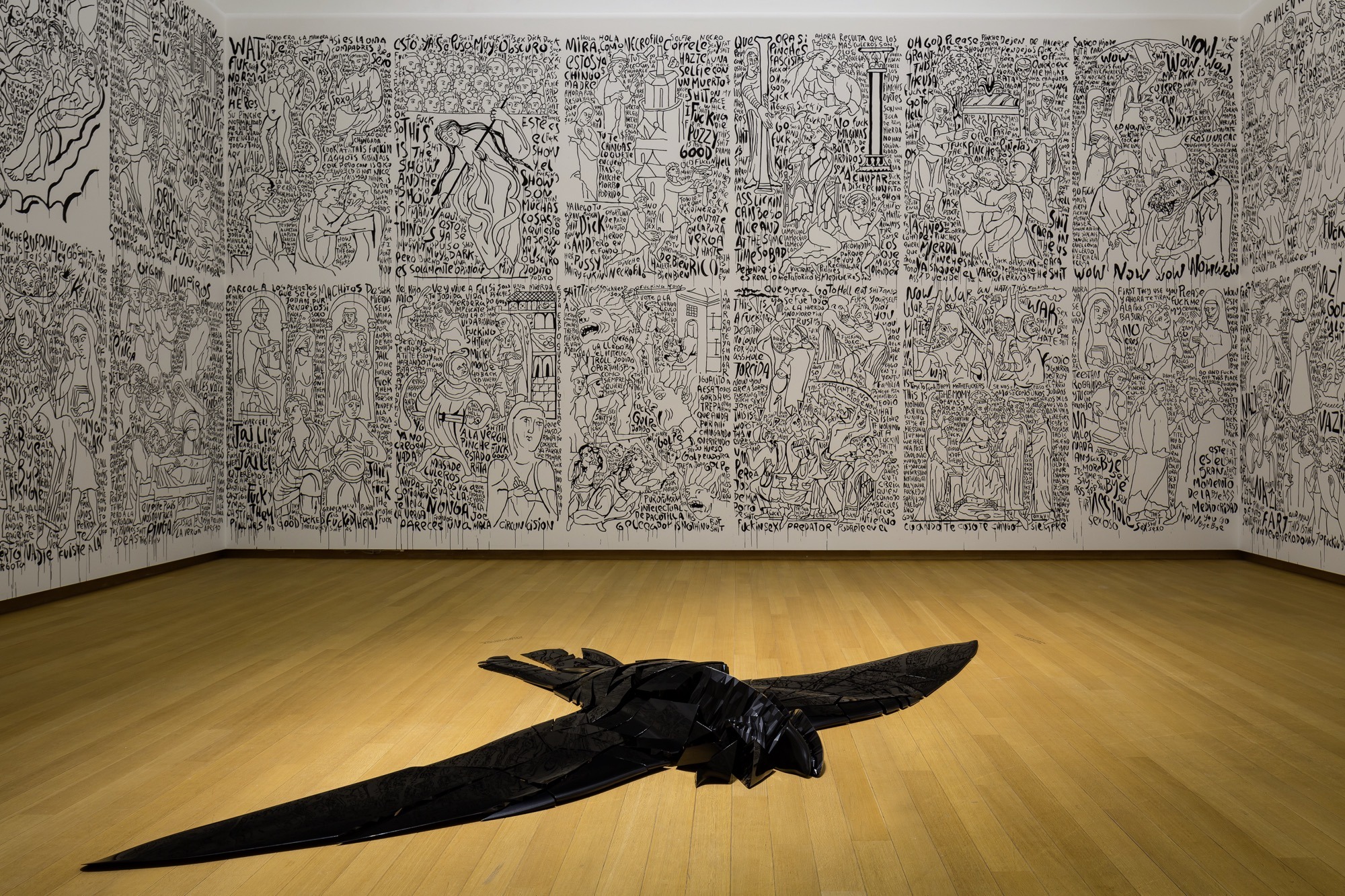 Installation view featuring: Carlos Amorales, Aprende a joderte (Learn to Fuck Yourself), 2019. Courtesy of the artist and kurimanzutto, Mexico City / New York; and Dark Mirror, 2008. Collection Vanhonsebrouck. Photo: Peter Tijhuis
‘Carlos Amorales – The Factory’ is the first European retrospective exhibition by multidisciplinary artist Carlos Amorales. It showcases the work of one of Mexico’s most important contemporary artists from the 1990s to the present day –the most recent piece was made especially for the exhibition. Spanning 14 rooms of the museum, the exhibition includes spatial works, installations, paintings, drawings, videos, prints, textiles, animations, and sound works, which Amorales incorporates in his open, non-chronological, large-scale spatial installations. Visitors will be able to navigate their own route around Amorales’s world of fantastical images and stories that explore the field of tension between the individual and society.

Carlos Amorales began his career in Amsterdam in the 1990s, as a student at the Gerrit Rietveld Academie and the Rijksakademie. It was during this period in the city that he changed his name to Carlos Amorales, a conceptual identity which he would ‘lend’ to other people as part of his enquiry into the function of art in everyday life. He lent the Amorales character (a masked figure inspired by Mexican lucha libre wrestlers) to artist friends, fighters, and strangers. They adopted his stage name and donned his mask to take part in wrestling matches and in performances in museums and other art institutions in Europe, US, and Mexico (venues include Tate Modern and Centre Pompidou).

Amorales left Amsterdam in 2004 to return to Mexico City, where he set up his own studio. Inspired by the media’s mass production and distribution of imagery – and with references to Warhol’s Factory and Disney’s early animation studio – Amorales and his team created a digital image bank titled Liquid Archive containing thousands of monochrome silhouettes in vector format. On request, this resource for the artist and his team is sometimes shared with third parties.

The Liquid Archive has formed the basis for the rich and multifaceted body of work that Amorales has built up over the last 15 years. The essentially open-source character of the images that Amorales creates (other people have ‘borrowed’ freely from them), means they can detach themselves from the world of autonomous art and stray into the realms fashion, music videos, tattoos, and record covers – through which they return to art in the form of work by other artists. Amorales’s Factory is a nod to pop culture and to our neoliberal world in which, the artist says, “the globalized assembly-line has gotten a bit out of hand.”

The exhibition is accompanied by a book made in collaboration with Mevis and Van Deursen, the Amsterdam-based designers who worked with Amorales in 2000 on his first book Los Amorales, which is now a collector’s item. This new artist’s book focuses on Amorales’s studio practice. Interweaving and overlapping layers of comic strip-like frames (designed by Elsa-Louise Manceaux), a manifesto by Amorales about his artistic identity, and illustrations of his work, the design invites the reader to zoom in and out on the many aspects of Amorales’s artistic universe. With a written contribution by Reinaldo Laddaga.

Carlos Amorales (Mexico City, 1970) studied at Amsterdam’s Gerrit Rietveld Academie from 1992 to 1995, and at the city’s Rijksakademie van Beeldende Kunsten from 1996 to 1997. His parents Rowena Morales and Carlos Aguirre are both renowned Mexican conceptual artists. To avoid confusion with his father he used the name Carlos A. Morales, which he later contracted to Carlos Amorales.

In 2003, Amorales invited the visiting public to make lucha libre boots at the We Are The World exhibition in the Dutch pavilion at the Venice biennale, which was curated by Rein Wolfs, the future director of the Stedelijk Museum. Wolfs also included Amorales’s Nuevos Ricos record label in the Working Class Today... Mañana Nuevos Ricos! exhibition at Museum Fridericianum in Kassel (2009).

The label, which Amorales co-founded with musician Julián Lede in 2004, specialized in producing large-scale concerts and distributing pirated editions of CDs with covers based on the silhouettes from the Liquid Archive.