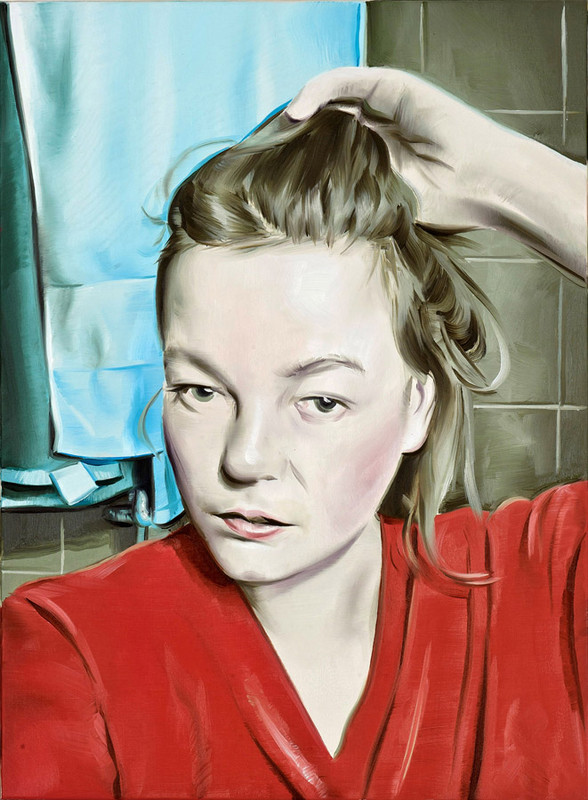 Wilkinson Gallery is pleased to present its second solo exhibition with Polish artist Marcin Maciejowski.
Maciejowski is a great observer of modern life. Re-fashioning the unspectacular, jocular and otherwise forgotten images of our time into realist paintings, he manages to decode and interpret the complexities of post-capitalist society’s medias whilst also playfully satirising the medium of paint itself. His paintings appropriate the ‘fast’ imagery associated with photography but pause the process of looking through the ‘slow’ analogue process of painting. He combines a crude flashiness reminiscent of comics with a meticulous technique, a mechanism that serves to undress the precocity of the European avant-garde and painting at large.
Could Renoir really be wrong?, 2011 frames the exhibition and initiates a dialogue between Maciejowski and Pierre-Auguste Renoir. The smooth texture and mild colour transitions within this painting, whose monochromatic tone is prototypical of Maciejowski’s ‘historical’ canvases, affords the painting the character of an aesthetic object for contemplation. But this ornamentalism is seemingly faux and emblematic of the artist’s tongue-in-cheek wit and concerns with self-aggrandisement, the formation of canons and ultimately the myth of the artist in European culture, which Maciejowski’s Renoir seems to be contemplating himself. The ideogram and title of the painting is a quotation from Renoir’s biography by Henry Perruchot, appropriated here it appears as a direct product of Maciejowski’s wry brevity and ultimate interest in the mechanisms of ‘truth’ and preconception within the history of art. As a student Maciejowski flatly rejected the call of his professors to adopt a style after Renoir. However, the artist is now returning again to Renoir through paintings like Girl Reading, 2012 and Woman arranging hair in a bun, 2011 and re-painting these works with his own brand of idiosyncratic realism, adding new meanings to old themes. We are subsequently left to ponder, with the seriousness we would afford an old master - or are culturally obliged to – the trivialities of the otherwise unremarkable. Or take for example Daydreamer, 2011 the composition’s resemblance to Vincent Van Gogh’s Portrait of Dr Gachet is evident, yet the addition of a contemporary watch paired with the artist’s virtuoso stroke of simplification, serves to complicate if not deride our relationship with this image. Maciejowski’s technique manages to calm the disorder of our image overload but simultaneously highlight the pomposity, but also power, of painting whilst satirising the vacuity of so much contemporary imagery.
Maciejowski doesn’t bore us with the usual tropes associated with the relevance of painting today, he is firmly aware of the legitimacy of other image producing mechanisms. Indeed the sources of his images – comics, posters, computer games, his own snapshots, the internet – are all mediums that belittle the relevancy of the individual. Subsequently, Maciejowski highlights his own situation as an artist in the contemporary world and his relationship between his practice and other equally valid methods of image production. By thus believing in the ability of painting to reflect on other methods of depiction, he makes a virtue of the stillness of the medium itself. Similarly, a work like To do away with ideas (Wlodzimierz Pawlak), 2011 champions the strength and optimism of a painter like Pawlak. Indeed, Maciejowski juxtaposes the uncertainties of his Renoir with the physical confidence of Pawlak as he poses with his paintings like a boxer.
The artist’s hybridisation of mass culture, high art and images of the everyday engages a critical revelation of the complex interactions existing within our image-economy and the subjective mechanisms of image making. Likewise, his laconic narratives and paired down aesthetic offer us an antidote to the over proliferation of image and information and provide a space for interpretation. The resultant images are satirical documents of our time as defined by Maciejowski’s own cynical brand of humour and his vision of a society progressively oblivious.
In many ways we can understand Maciejowski as a modern day allegorist; understanding and describing a complex and decentralized world through its most banal and simple events. Marcin Maciejowski was born in 1974 in Babice near Krakow, Poland where he lives and works. In 1996 he founded Grupa Ladnie with Rafal Bujnowski, Marek Firek, Wilhelm Sasnal, and Josef Tomczyk Kurosaw. Recent important solo exhibitions include a retrospective at The National Museum in Krakow, Poland ‘Tak Jest’ (2010) and ‘Are you really from the art world?’ at Kunstforum Ostdeutsche Galerie, Regensburg (2010). Recent group exhibitions inc lude ‘History in Art’ at M OCAK , Krakow (2011); ‘The Power of Fantasy: Modern and Contemporary Art from Poland’ at Centre for Fine Arts, Brussels; ‘Schism, Poli sh Art of the 1990s’ at Centr e for Contemporary Art, Warsaw (2009) and ‘The Ma k ing of Art’ at Schirn Kunsthalle, Frankfurt (2009). He is also included in ‘Vitamin P2’ published by Phaidon (2011).
www.amandawilkinsongallery.com