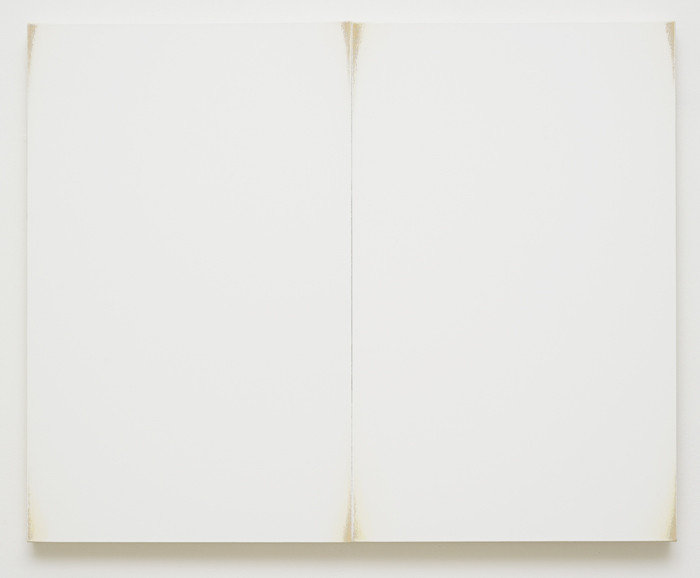 Maleri is Freddie A. Lerche’s first solo show in ten years. The title is the Danish word for painting, and painting is all he strives for. He consequently claims that he is not an artist, because he then “might be cooking or sewing dresses”. Art can be anything nowadays – it can be whatever. Painting, on the other hand, is painting and cannot be anything else but painting.

Freddie A. Lerche’s picture-less paintings may initially strike the viewer as monochromes. They are, however, not made by use of one color, but through the application of two or more colors applied with a brush in numerous layers. One after the other, very fine layers, often somewhere between fifty and a hundred - applied to canvas, unprimed canvas. The first layers seep into the canvas. They dry slowly. The following layers dry quicker.

The paintings presented at Andersen’s have been made within the past 5 years or so. Only one is painted with horizontal brushstrokes. The others, for the most part, are painted with vertical brushstrokes. They are executed in a manner that comes naturally for a painter trying to cover a canvas with paint. The corners remain not entirely covered by paint, since they are peripheral to the painter’s body, so the corners are not left unpainted on purpose, but as a result.

It is difficult to say what Freddie A. Lerche’s paintings are, because they are not intended to depict or refer to anything. Freddie A. Lerche simply wishes them to be, in and of themselves. Beyond the paint on the canvas on the stretcher, his paintings are not. According to Freddie, he does not see why he should, for instance, turn a duck into paint or paint into a duck. Therefore, though his paintings may seem austere, they do not demand any preconditions or prejudices of the viewer. They rather need the viewer to leave his or her preconditions and prejudices behind in order to be present in front of the paintings that are present.
www.andersenscontemporary.dk
Edit Andersens