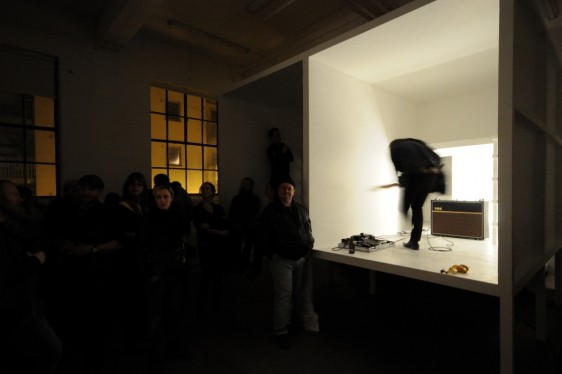 Commissioned by 0047 and developed by nOffice (Markus Miessen, Ralf Pflugfelder and Magnus Nilsson) and 0047, Space Station is a spatial social experiment that invents a system and methodology in order to renegotiate the relationship between art production, the exhibition and its spatial envelope.

nOffice and its three partners Markus Miessen, Magnus Nilsson and Ralf Pflugfelder are an architectural practice based in Berlin and London. Situated on the crossroads of critical spatial design, architecture, urban intervention and the art world, nOffice have been accumulating expert knowledge about the conceptualisation and implementation of archives, libraries, gallery spaces, cultural centres and the typology of the ‘hub’. nOffice have been specialising in the development of heterotypologies: Their recent projects for Manifesta 8, Performa 09, ASAP, Archive Kabinett, and the longer term Hans Ulrich Obrist Archive are bastard typologies: productive spatial constructs that overlap, dissect, and conflictually flatten several usually distinct programs into one. nOffice believe that bastards are stronger than pedigrees. They are pushing the idea of the heterogeneous space, something like an ‘interior city’.
www.0047.org