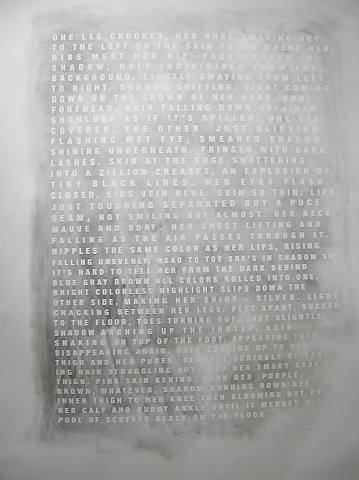 Fascinated with the nude as portrayed in the history of art, Banner has turned her attention to the female form, presenting a new series of text-based descriptions, made from life models. Utilizing words as opposed to line or color, Banner is able to reinvent the nude. More than just descriptive texts these works remain deeply engaged with the history of painting. Typically associated with the gaze of the male painters, Banner breaks new ground in describing the feminine form. These drawings work in a hyper-intimate way, between the viewer and the subject. Banner will also feature neon work that reads Nude Standing. Shaped by her own hand, the peach/ flesh color tone neon operates as an illuminated drawing for Banner’s wordscapes.

Fiona Banner was born in 1966. She lives and works in London. Banner is represented in various collections in the US and abroad including The Museum of Modern Art, New York; Philadelphia Museum; The Arts Council of England; Tate Gallery, London; and the Walker Art Gallery, Minneapolis. In 2003, Banner was short-listed for the Turner Prize.