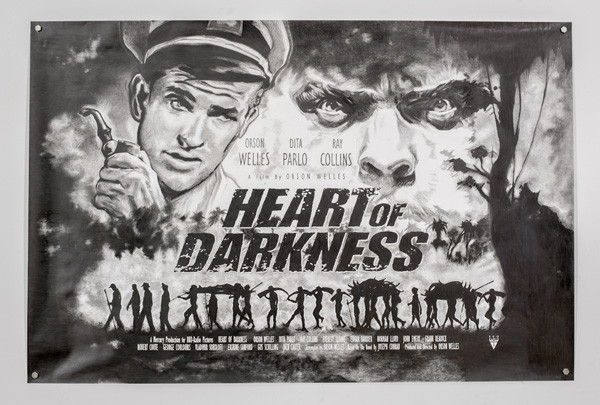 1301PE is pleased to announce its fourth solo exhibition with acclaimed British artist Fiona Banner. Ranging from her ʻwordscapesʼ to found and transformed military objects, Bannerʼs work is
known for exploring the limitations and possibilities of language and its cultural parameters.

In a homage to Orson Welles failed attempt at his first movie, "Heart of Darkness," Banner constructs an exhibition that articulates manʼs hubris. Welles wrote the script Heart of Darkness, based on Joseph Conradʼs 1890s novella, in the late 1930s.

"Like the original novel, Wellesʼ script for Heart of Darkness is a parody of power gone bad - but it is also a narrative of seduction, a lens as well as a mirror. Welles film was never made because it was considered too expensive, and too uncompromising artistically, and also because its narrative parallels with the rise of fascism in Europe. Today other parallels are drawn." - Fiona Banner

Banner reveals the intricacies of narrative as she combines the visual and the written. She presents graphite drawings based upon specially commissioned movie posters, as well as a large wall drawing, and sculptures that convey human desire and constraint.

Unboxing, The Greatest Film Never Made exposes how humans reference themselves; wild with the dualities of ambition and restraint. With this exhibition Banner has redefined a story of the past by uncovering its relevance to the modern self.

Fiona Banner was born in 1966. She lives and works in London, where she also runs The Vanity Press. Banner is represented in major collections in the US and abroad including The Museum of Modern Art, New York; Philadelphia Museum; Walker Art Gallery, Minneapolis. In 2002, Banner was short-listed for the Turner Prize at Tate Britain. One-person museum exhibitions and projects include; 2010, The Duveen Galleries Commission, Tate Britain; 2007, "The Bastard Word" The Power Plant, Toronto, Canada. Selected group exhibitions include; 2011, "I Am Still Alive: Politics and Everyday Life in Contemporary Drawing", MoMA, New York; 2002,"Remix: Contemporary Art and Pop", Tate Liverpool. Banner has recently collaborated with architect David Kohn on the Roi des Belges, a temporary building inspired by the boat Conrad piloted up the Congo, situated on the roof of the Queen Elizabeth Hall in London. Banner will present Wellesʼ screenplay performed for the first time ever, live to camera, on the Roi des Belges on March 31st as part of Artangelʼs year- long program at www.aroomforlondon.co.uk.
www.1301pe.com