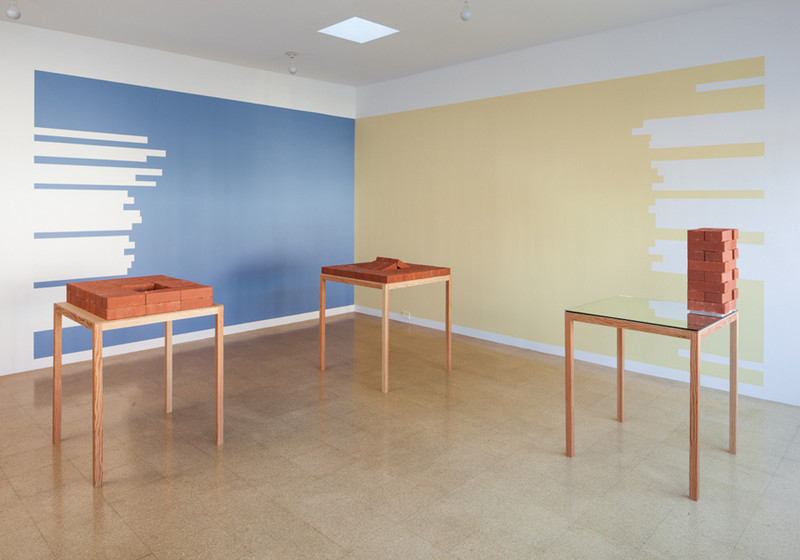 1301PE is pleased to announce its first solo exhibition with Mexican artist Jorge Méndez Blake. Ranging from sculptures and drawings to wall paintings, and inspired by works of literature and poetry, Méndez Blake's varied body of work draws connections between word and object, giving physical form to the written word.
For his exhibition, Méndez Blake has created monuments to well-known poets and writers of the last two centuries, including Melville, Yeats, Dickinson, as well as Mallarmé, Valéry, and Rulfo. More than simply illustrating their writings, he forges subtle links between the content of specific poems, their titles and the artworks.
"Architecture and literature find a point of contact under the modern concept of monument." – Jorge Méndez Blake
Towards this end, Méndez Blake presents distinct types of work: Poems, Monuments, and Wall Paintings. For the Poems, he has created drawings of the text of poems by Melville, Yeats, and Poe, transforming their words from signifiers into unique objects. The sculptural Monuments to Emily Dickinson, James Joyce, Juan Rulfo and others avoid facile interpretation; their composite identities are indebted to the writers' texts, their lives, and the sculptures themselves. The Wall Paintings – based on the works of Hart Crane, Paul Valéry, and José Goristiza – are each a seductive monochrome, their forms echoing jagged-edged blocks of poetry. Devoid of written content, their original meaning is obscured. Ironically, it is the words of the poems that give the paintings their shapes. Rendered inactive as poems, they take on another layer of meaning as paintings.
Jorge Méndez Blake channels multiple texts through the prisms of memory and reference to produce artworks whose simple concrete forms belie their complex origins.
Jorge Méndez Blake was born in 1974 in Guadalajara, Mexico, where he currently lives and works. He was the recipient of the Young Creators Grant in 2007-2008 by the National Fund for Culture and Arts, Mexico. One-person museum exhibitions include; 2010, "The Marquise Went Out at Five...", Museo Tamayo, Mexico City; "All the Poetry Books", Museum of Latin American Art, Los Angeles; 2008, "The Castle", Museo de Arte Moderno, Mexico City. Selected group exhibitions include; 2011, "Resisting the Present: Mexico 2000/2012", Musée d'Art Moderne, Paris; "Crisisss América Latina, Arte y Confrontación: 1910-2010", Museo del Palacio de Bellas Artes, Mexico City; 2010, "21st Century: Art in the First Decade", Queensland Art Gallery, Queensland, Australia.
www.1301pe.com