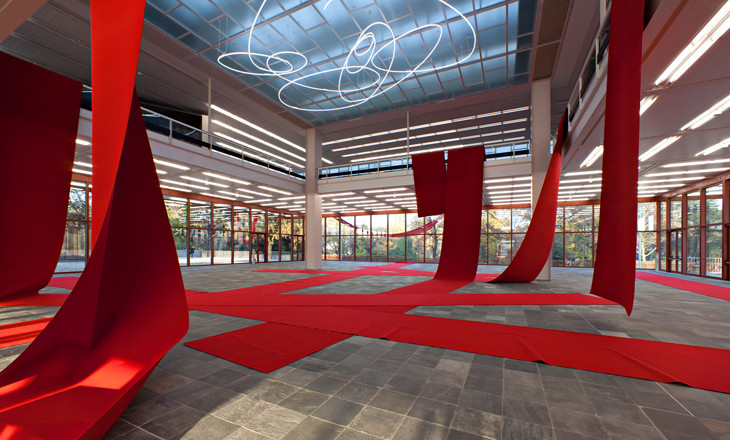 For the opening of the 21er Haus, invitations were extended to artists who raise questions about the social and institutional significance of the museum and address the new venue and its history. Each artistic intervention approaches the site in an individual way and contributes to an open field of experimentation, in which different artistic disciplines can encounter each other and overlap.

The various approaches chosen by the artists reflect a broad spectrum: Marcus Geiger’s parody of official symbols representing the state features flags and red carpets that have left their usual context. In the sunlit rooms of the 21er Haus, Franz West places emphasis on the moonlight and its special qualities. Florian Hecker’s sound piece, a chimera of sound and voice with a hallucinatory effect, has grown from an artistic collaboration. While Oswald Oberhuber, with his “museum within a museum”, views Austrian art from a different and frequently forgotten perspective, Christian Philipp Müller, in his work Family of Austrians, addresses clichés commonly associated with Austria.

Right next to it is Peter Kogler’s installation on the artists’ portraits that have been produced within the framework of the alternative museum project museum in progress since the 1990s. With his fluorescent sculpture Struttura al neon per la IX Triennale di Milano, Lucio Fontana opens up space for a fourth dimension in architecture, and Sophie Thorsen has looked into the history of toy sculptures conceived for playgrounds in Vienna during the 1950s with regard to an expanded historiography of art. On the floor below, Andrea Fraser is presenting an exaggerated and hysterical guided tour of a museum, thus ironizing the museum as an institution of high culture.

Lois Weinberger counters the traditional presentation in the “White Cube” with his Wild Cube, while only a few yards farther, in the museum shop, Heimo Zobernig amalgamates the economic systems of art and fashion, discussing the role of the artist as a brand with his T-shirt Sale. Screenings in the museum’s cinema include old newsreels conveying the building’s history, a poetic illumination of the architectural structure through fireworks by Sasha Pirker, and a film by Pierre Huyghe about the potentials and surreal stories that may unfold in an abandoned museum. The film Hypercrisis by Josef Dabernig, staging the creative blockages and failures to concentrate of the last remaining artists in a recreation home for Soviet filmmakers, will have its premiere in Austria.

The title Great Prospects! refers to the transparent architecture of the 21er Haus, which grants a view in all directions, but it is also the literal translation of „Belvedere“ and thus includes the special history of the overarching museum institution which was founded in 1903 as the „Moderne Galerie“. Installations/works by Lucio Fontana, Andrea Fraser, Marcus Geiger, Florian Hecker, Peter Kogler/museum in progress, Christian Philipp Müller, Oswald Oberhuber, Sasha Pirker, Sofie Thorsen, Lois Weinberger, Franz West, and Heimo Zobernig Film projections by Josef Dabernig and Pierre Huyghe, as well as newsreels of the Filmarchiv Austria.
www.belvedere21.at