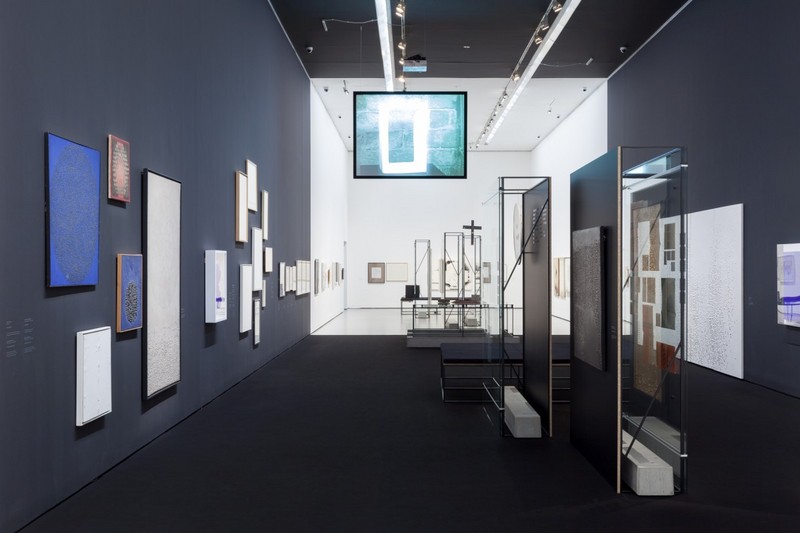 Bischoffshausen developed his reduced and material-based approach, by which he fathomed the limits of painting, at an early stage, in the context of his journeys to Italy and France. Gallery visits in Venice and Milan laid the foundation for his art, in which he never ceased to probe the boundaries of painting. If his work was initially determined by a gestural, abstract manner of painting, he subsequently arrived at a new language of form by his use of sand, cement, perforations, and traces of fire, exploring the connections between script and image.
His friendship with the Italian avant-gardist Lucio Fontana, who became world-famous for his slashed canvases, made Bischoffshausen adopt a broader concept of what a work of art might be, which he consistently elaborated after his move to Paris in 1959. Bischoffshausen soon gained access to the French art scene. The visual artist and ZERO representative Bernard Aubertin became an important companion. Between 1962 and 1965, Bischoffshausen’s career progressed rapidly, with shows in France and Germany and his participation in group exhibitions in Italy. Contacts to the international group NUL of Jan Schoonhoven enabled him to also try his success in the Netherlands. His friendship with Herman de Vries and Heinz Mack will also be addressed in the Belvedere’s exhibition.
Besides his artist friend Erwin Thorn, Bischoffshausen numbered among the few Austrian members of the ZERO movement. That Bischoffshausen was well aware of the direction he would take in his art is illustrated by an anecdote he told his parents-in-law in a letter: “A gallery idiot said to me: ‘What do you want? What you do is the end of painting [...].’ ‘You are wrong,’ I replied, ‘this is where modern painting begins.’” His individual material iconology and conceptual reorientation in art before and after 1968 made him a leading exponent of the avant-garde. The exhibition seeks to build a bridge between the first material pictures of the 1950s and the Paris period within the ZERO movement. This is also the first time that light will be shed on the 1970s and 1980s. Screening the extensive archives of Ernst and Heide Hildebrand is an essential prerequisite for the publication of Bischoffshausen’s work and thus part of the on-going research on post-war art, which once again highlights an Austrian artist who is unjustly little known in Europe.

More than ZERO – Hans Bischoffshausen also tells about the friendship and collaboration between Bischoffshausen and the gallery owners Heide and Ernst Hildebrand. More than 250 documents – letters, photographs, and exhibition folders – attest to the close relationship between gallery and artist. The exploration of Ernst Hildebrand’s extensive archives has provided the basis for the publication that will appear on the occasion of the exhibition and has been an integral part of the Belvedere’s research on post-war art.
In 1961, Heide and Ernst Hildebrand opened their gallery in Klagenfurt, one of the first art venues in Austria whose programme focused entirely on radical modernism and avant-garde art from the very outset. The opening exhibition – 10 Years of Bischoffshausen – was in line with the gallery’s original intention to offer a platform to artist friends, for at the time the couple had already known Bischoffshausen for several years. They had met at the artist’s first solo exhibition at the Galleria del Cavallino in Venice in 1957.
After its initial concentration on graphic art, the gallery soon embraced the art of the Dutch and German NUL and ZERO movements as one of its focal points. The Hildebrand Gallery therefore became one of the first galleries outside Germany and the Netherlands to open its doors for ZERO. As early as 1962, one year after the small gallery had been founded, the first exhibition of one of the internationally most avant-gardist and radical art movements took place. The exhibition, entitled New Dutch Tendencies, included such artists as Armando, Henderikse, Henk Peeters, and J. J. Schoonhoven – almost the entire Dutch NUL group. The previous exhibitions of abstract art having been unusual and hard enough to take in, it was now all the more difficult for the Klagenfurt audience to come to terms with the “new Dutch tendencies”.
Dr Lee Springschitz, then-director of the Kärntner Landesgalerie and an art reviewer for the newspaper Neue Zeit, wrote: “Together with Ives [sic!] Klein [...] and Aubertin [...], the four Dutchmen belong to the aforementioned extreme group whose creations are at best interesting mechanical experiments, but can lay claim to being works of art only to a modest degree and only to the extent of the creative ‘idea’ behind them; yet as documents of a new aestheticism that is typical of our epoch and can no longer be erased from contemporary life, their achievements are remarkable. They provide orientation and in fact do so in an excellent and high-quality fashion.”
Walther Nowotny of the Volkszeitung, on the other hand, was completely disgusted and in his article “Tightrope Walker at the Bottom of the Sea” complained that a work by Henderikse would not be worth more than six German marks – the sum of the pennies pasted onto it. In his last paragraph the journalist concluded: “The four artists also edit a magazine called ‘0 – Zero’, thereby describing themselves as nothing. Yes – I wouldn’t wish to contradict. The title of my article has nothing to do with my article. Why not? Because the works on display don’t have anything to do with art either.” But Heide and Ernst Hildebrand did not allow themselves to be irritated. With their unerring sense of good art, they recognised ZERO’s potential early on and enthusiastically welcomed the avant-gardist movement at zero hour, so to speak. Meanwhile, the art of the ZERO movement has not only gone down in the annals of art history, but has also become recognised and successful on the art market. Recent ZERO exhibitions at the New York Guggenheim Museum, the Martin-Gropius-Bau in Berlin, and the Stedelijk Museum in Amsterdam are proof that it is one of the most important art movements of the twentieth century.? ?At the time, hardly another Austrian gallery paid attention to the ZERO artists. The show at the Belvedere therefore also presents important artists exhibited at the gallery then and with whom Bischoffshausen and Heide and Ernst Hildebrand had close ties: Lucio Fontana, Yves Klein, Piero Manzoni, Jan Schoonhoven, Henk Peeters, Herrman des Vries, and Bernard Aubertin.
The commission of a thirty-metre-long frieze for the newly built surgical ward at the Klagenfurt Hospital with which the architect Ernst Hildebrand entrusted Bischoffshausen in 1961 was another result of their collaboration. Entitled Champ d’Energie, the relief, which consists of twelve panels and is Bischoffshausen’s largest work, was removed for restoration in 2001 and only reinstalled in the foyer of the new Klagenfurt Clinical Centre in 2010.

Monochromy and Ecstasy
His move to Paris in 1959 meant the beginning of a new period for Hans Bischoffshausen. His works were now determined by structure, monochromy, and reduction, and with his white-in-white energy fields he went to the limits of visibility. “I’m pushing the asceticism of white to the end,” the artist described his intention. His ideal was a picture that could no longer be photographed. The soft, wavy, and vibrant structures frequently volatilising towards the margins and occasionally marked by scorched holes and residues of fire as if they had been used in a ritual are still as fascinating as they used to be. He created his material pictures, the surfaces of which were perforated or burned, with pictorial content reduced to the essentials. This sculptural treatment of a picture’s surface led to the dissolution of the separation between image and space.
In all of his reduced structural pictures the artist addressed such general themes as space, time, energy, and silence. That quiet was a prerequisite for Hans Bischoffshausen in order to be able to embrace the essential was demonstrated by his one-minute silence in the ORF television programme Club 2 on 26 September 1979 on the occasion of the death of an artist friend. Silence demonstrates that there is no recognisable background to our civilisation’s pushing to the fore in self-dramatisation. Upon his return to Carinthia in 1960, Bischoffshausen abandoned the colour of white for the time being, creating reliefs in gold and red. From 1975 onwards he dealt with the form of the cross. In the early 1980s, the artist returned to the white colour, simplifying his means of artistic expression. He undertook numerous journeys, such as to Taiwan. His impressions gained during that voyage are reflected in the series Taiwan Report. Bischoffshausen increasingly withdrew from the official art scene and during his final years suffered from health problems. A progressive damage of the optic nerve eventually led to blindness. Hans Bischoffshausen died in Villach on 19 June 1987.

ZERO
In 1958, Heinz Mack and Otto Piene formed the Düsseldorf-based ZERO group, which was joined by Günther Uecker in 1961. ZERO referred to a phase of silence and quiet, an intermediary zone in which a previous state transitions into a new one. With their kinetic light objects, which extend into and incorporate space, the members of the group produced a new, purist aestheticism that oscillates between picture and sculpture and which had a decisive impact on Op art and kinetic art. They joined forces with such artists as Lucio Fontana in Milan and Yves Klein in Paris to form a powerful avant-garde. The early recognition they gained at the museums in Leverkusen (1960) and Amsterdam (1962) made their efforts worthwhile. In 1966 the group disbanded as its members had started to go separate ways in terms of both their work and personal biographies. Piene, Mack, and Uecker exhibited their art at various biennials and at Documenta until well into the 1970s.
Bischoffshausen had only drawn near to the ZERO movement via the Italian avant-garde. That he had not taken part in the group’s important early exhibitions in Germany is no longer a reason to not count him among the members of the closer circle of ZERO artists, for after all he did figure in the ZERO artists’ group exhibitions in the epicentres of Milan and Paris. The esteem he was held in by Lucio Fontana in the late 1950s had positive after-effects, as had his contacts with Henk Peeters, who featured the artist in the periodical NUL=0 in 1963. Bischoffshausen’s links to the Dutch group NUL influenced his work. These were artists operating with serial structures and exploring the phenomenon of chance while using new materials and experimenting with the elements of water, earth, fire, and air.
Bischoffshausen’s late international recognition as a member of the ZERO group may have been a problem of definition. If ZERO is interpreted as a movement determined by artistic and individual relationships, Bischoffshausen was certainly part of it. Nevertheless, in spite of the appreciation he met with, he was not given the opportunity to take part in the ZERO group’s important early exhibitions.
www.belvedere21.at