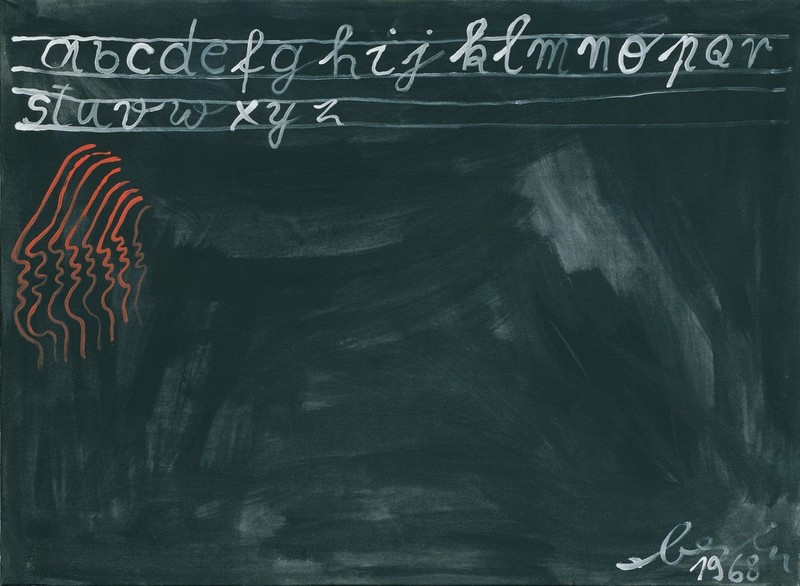 Oswald Oberhuber (b. 1931) is one of the most influential living Austrian artists. The current retrospective at 21er Haus can be seen as the most comprehensive presentation of Oberhuber’s work to date, showcasing his prolific output from the late 1940s to the present through approximately 300 objects, including informal sculpture, drawings and paintings, collages, assemblages, writing and number pictures, big fabric works, and many more.

“People shouldn’t develop a style; really, every image should be new. At some point, you get into a routine and know how things will turn out. As soon as I feel like that, I’m bored.”

This Principle of Permanent Change refers not only to Oswald Oberhuber’s artistic practice, but also to his roles as exhibition maker, gallery owner, professor and director at the University of Applied Arts Vienna.
Oswald Oberhuber’s work represents permanent change and hence a radical break with the idea of a homogeneous, stylistically consistent oeuvre – he is, as it were, a postmodern artist avant la lettre. This is reflected in the diversity of the exhibition. “Simultaneously”, say the curators Luisa Ziaja and Alfred Weidinger, “throughout the diverse range of styles, media, materials and techniques used, ultimately Oswald Oberhuber is always visible. His approach to form and colour, his focus on the line, are common themes that run through his work and are made strikingly apparent in the way the works are positioned opposite and alongside each other in this exhibition. Based on an idea by Oberhuber himself, the exhibition architecture for the 21er Haus and its interplay with the artworks on display facilitate precisely that: surprising moments between reorientation and continuity.”
Pioneer of Informal Art in Austria

Oswald Oberhuber initially learnt sculpture at the federal vocational school in Innsbruck, Tyrol. At barely twenty years old, he developed an entirely independent artistic approach to French post-war art, particularly Tachisme and Informalism in the media of drawing, painting and sculpture. This non-figurative art – also called Lyrical Abstraction – aspires to completely dissolve form by means of a spontaneous, subconscious creative process. Not only is Oberhuber one of the first informal artists in Austria, but rather by translating these principles from painting into his concept of informal sculpture he also made a unique contribution in an international context. These works are mostly realized as three-dimensional spatial drawings made of plaster, wire and other fragile materials. They contrast radically with the then canonical vocabulary of modernism in general and post-cubist sculpture in particular. In the mid-1950s, at the height of the Informalism Oberhuber brought this phase to a close, started working realistically and took the first of a great number of artistic leaps, which would define his work from this moment on.
Permanent Change

Oberhuber followed this pattern of surprising new beginnings – a testament to his open and agile mind – with great consistency. Referring to Leon Trotsky’s theory of Permanent Revolution, he set forth his Principle of Permanent Change in Art in 1956. Always evading definition and categorization, unaffected by reservations, Oberhuber explores a wide range of artistic movements, discovers and devises, experiments and assimilates, to exhaust each potential before moving on to the next new thing. His anti-heroic approach to art manifests itself in his constant questioning of his own method as well as the parameters of the artistic production of meaning and the concepts of work and author, which repeatedly begin to unravel.
www.belvedere21.at