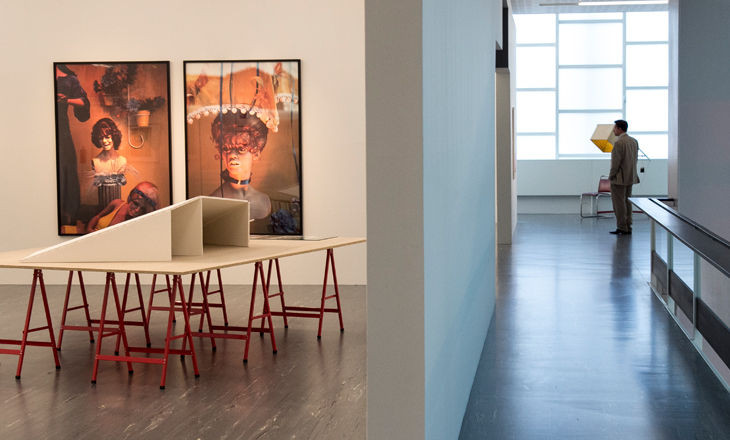 Changing at regular intervals, the presentation of the collection of contemporary art at the 21er Haus gives insights into Austrian art production while simultaneously placing it in an international context. The current installation The Collection #3 comprises works from the 1940s to most recent positions. Works from the Belvedere’s permanently growing holdings and from the Artothek des Bundes are complemented by national and international loans. The section Freedom – Form – Abstraction juxtaposes works of Austrian post-war modern art with contemporary positions, thereby demonstrating both thematic and formal similarities. In search of new identities and languages of form after World War II, artists referred to geometrical construction, reduced abstraction, and gestural painting. These formal tendencies reflected such international movements as Tachisme/Art Informel in Paris or Abstract Expressionism in New York. During the following two decades, abstraction as a genre was to develop into a global language. In the past twenty years, contemporary artists have also harked back to non-objective painting in the form of free gesture, constructivism, or monochrome reduction. In the section Sign – Image – Object, the focus is on the blurring of boundaries between image and sign, script and language, and object and idea. The play between signifier and signified – the form of a sign and its meaning – and their unclear statuses are also addressed by making reference to the pattern of the process of perception and the translation of what is perceived into language. Finally, Body – Psyche – Performance deals with social norms and their negotiation in the visual arts since the 1960s. Constructions of the self and their renderings, marked by a tensional relationship between the mind, social issues, and the act of representation as such, serve as a point of departure. Stereotypes and conventions, expressed, for example, by way of role models and their social legitimization, are primarily addressed with regard to body and gender.