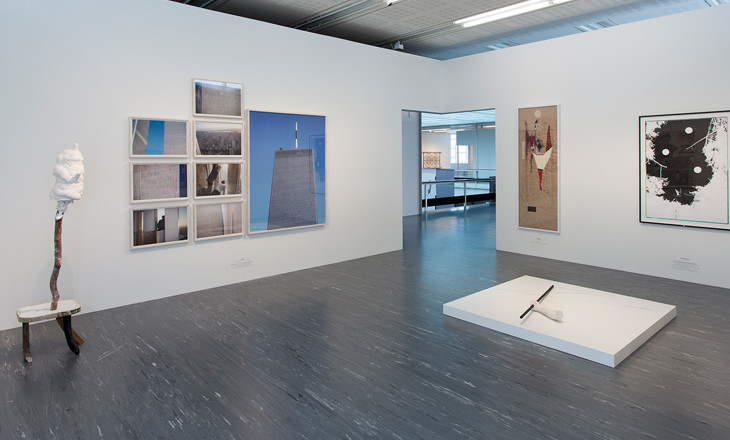 The history of a museum and its historically varied courses is reflected in its collection. Since the 21er Haus opened in 2011, the Belvedere has had the opportunity to grant continual access to works from its holdings ranging from post-war modernism to the present. Parts of the collection have been on display on the first floor of the 21er Haus since June 2012, where they have been illuminated from a multiplicity of standpoints via shifting thematic presentations. The focus is on contemporary art from Austria and its international contextualization, and as such transports the programmatic approach of the 21er Haus. Unlike the thematically arranged exhibitions before it, the Collection #4 shows works from the past decades as a reflection of the committed collecting policy of recent years.

This collection of current artistic production is flanked by a focus on the work of Harmann Painitz. Since the 1960s Hermann J. Painitz has addressed linear progressions in his often serial pieces structured via color, shape and signs. Often new manifestations – abstract picture languages - are derived from everyday classification systems, such as our alphabet. As part of this process Painitz develops a new visual code for the viewer to decipher. Such as his piece Mehr als die Summe der Teile (More than the Sum of its Parts) from 1997, the centerpiece of the exhibition in the 21er Haus. This bloc of pieces includes more than 350 framed graphics that initially appear to have been arranged arbitrarily. In fact the 26 symbols that appear have each been assigned to a letter of the alphabet. These chains of signs create words that are spelled the same in German and English, but have different meanings (e.g. “kind” or “wall”). Painitz translates the color communication birds achieve through their plumage in another series of abstract paper montages. Hermann J. Painitz’s oeuvre is characterized by such artistic transformation strategies which can be understood as reflections on the semiotic of the visual and the visual of the semiotic.