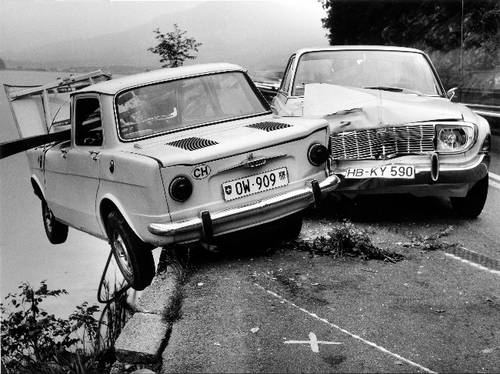 303 Gallery presents 'A Broken Arm', an exhibition of work comprising varied approaches to found objects and images. Taking Marcel Duchamp's ready-made snow shovel titled "In Advance of a Broken Arm", 1915, as it's starting point this selection of artists employ not only the use of existing images or materials, but have a specific sensibility towards narrative.

Hans-Peter Feldmann, who has been appropriating mass produced and amateur photography since the early 1970's, contributes a group of prints found in Paris titled 'Photographs of Helena J. taken in the same year that she committed suicide'. Karen Kilimnik will show a sculpture called 'Tarot Cards In Turin, in New York', alongside Arnold Odermatt's haunting photographs of automobile crashes in the Swiss countryside.

Lutz Bacher combines found images with found jokes from the mid 1980's, in surreally humorous combinations that retain a chilling objectiveness. Djordje Ozbolt works in a variety of historical painting styles and techniques that are often crossbred to further conversations about the perceptions of truth. In a more abstracted vein, Gedi Sibony's new sculptures, constructed of cardboard remnants, carpet and branches extract a poetic empathy and Katy Moran's gestural paintings, sourced from photographs found on the internet, are transformed into intimate works reminiscent of Renaissance masters.

303 Gallery is open Tuesday-Saturday from 10 am - 6 pm. For further information please visit us at www.303gallery.com or contact Lisa Spellman or Mari Spirito.