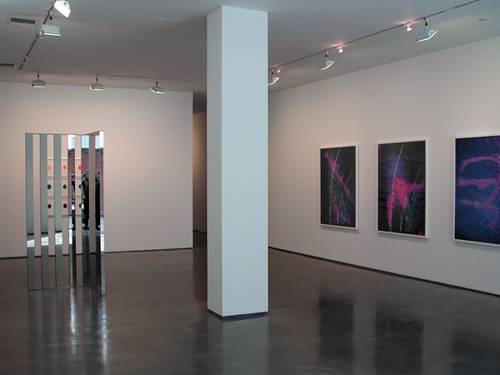 303 Gallery presents “Brave New Year”, a group show to ring in 2007, that provides both optimistic and grim views of the future. The exhibition is inspired by Aldous Huxley’s novel “Brave New World”, 1932, in which the technological development of society brought about deep despair.

Still pertinent today, Huxley’s view is that our civilization is manipulated by fear. In this environment advances in technology come at a loss to personal safety, individual identity, and emotional expression. This feeling is portrayed in “Gate”, an image of airport security by Thomas Demand, and photographs by Rodney Graham, Stephen Shore and Jane and Louise Wilson. Capturing relics of our recent past these works deal with defense systems, both biological and national.

“Brave New Year” brings together a variety of hopeful approaches to breaking free from institutional restraints. In “Buerostuhl” a new video by Roman Signer, the artist, seated in a forest on a office chair ignites a rocket, demonstrating a more direct form of escape that evokes both humor and empathy. Doug Aitken’s new photographs combine gestural interventions of mind-altering substances, some medicinal, others hallucinatory, both used to avoid pain and bad memories. Jeppe Hein utilizes altered perception with reflective sculpture, in this case ”Mirror Angle Lamellae”, and Kristin Oppenheim’s new sound installation follows the short trajectory of a figure fleeing on foot. “the witch squeezing blood from a miniature human”, a painting by Karen Kilimnik, considers the strong influence of religion and fanatical behavior and in Ceal Floyer’s “Ink on Paper” each element is formed by completely draining one pen, creating a unique individual mark.