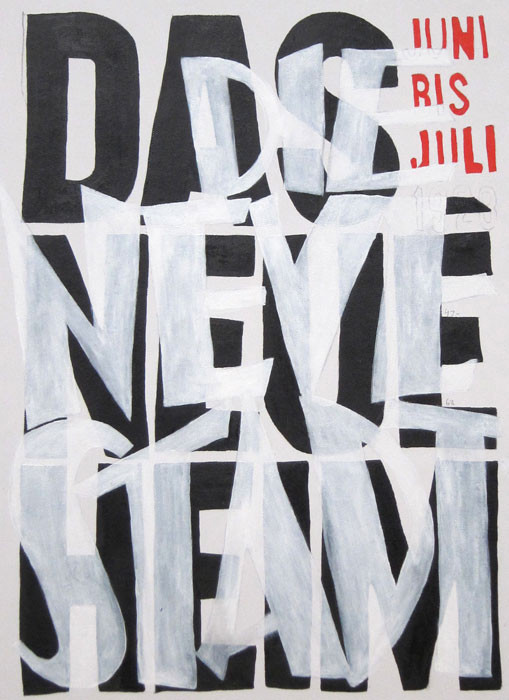 The title of Collier Schorr's ninth exhibition at 303 Gallery, "Journals & Notebooks," is just one example of the layered readings at play in Schorr's multimedia practice. It is also a ruse; lifted from collected diaries of a renowned writer, the title appealed to Schorr's sense of historical commentary and the authoritative postures of edited reflections.

With Journals & Notebooks, Schorr continues her assimilation into and re-invention of daily life in the small town of Schwäbisch Gmünd. In the 18 years since the beginning of her "Forests and Fields" series, Schorr has cultivated a posture somewhere between Robert Frank's traveling passerby and August Sander's veritable documentarian. Mapping her own history, both imagined and inherited, Schorr tells the interwoven stories of a small town observed by an outsider. Using the themes of national representation, émigré family life, and the forbidden nature of nostalgia, Schorr establishes the tension between present and timelessness through technical and formal means. While images lit with the summer sun mix with the harsher artificial tones of a makeshift outdoor studio, a similar sensitivity is brought to careful interventions with appropriated imagery. In "Sympatische Frau," a German housewife arranging flowers from the 50's is framed by the artist's addition of subtle collage elements. Here, Schorr's engagement with place and the contradictory narratives that make up history are further illustrated. The female figure, a scarcity in her past work, harkens both the end of the War, the end of German History and renewal.

A small banner blasts the phrase "The Fucking War is Over" at the entry to Schorr's show. Referring both to older concerns regarding gender and sexuality, it is a signal that history is still up for grabs, but that the viewer is located in Post-War Germany. The large scale "Uniform", 2008, is a color photograph of a cascade of stadium seats. While it is relevant that the shot was taken at Berlin's Olympic Stadium, its agenda points to the homogeneity, order and collective consciousness that have been recurring issues in Schorr's work - faded yesterday shown as colorful today. The arrangements and still life images Schorr has been constructing for the past four years further introduce a present day view of the German landscape. Brightly lit flowers are posed against the sky or a studio wall, sculptures that are shot like portraits, the elements are an effort to rebuild subjectivity without drawing on the human figure.

The primary figure in Schorr's exhibition is found in the video "In The World", 2008. A character, as if waking from a dream, finds himself out of sync with the world around him. Schorr uses the term "found performance" to describe what appears to be directed but is actually only ever observed from afar. The film conflates the often-conflicting agendas of narrative cinema (Truffaut's "The Wild Child") and performance/dance documentation (Lili Dojourie, Yvonne Rainer). This performance is unscripted, the artist and the youth/actor have never met, yet through a tenuous connection, a scenario unfolds that that captures the intentionality of a stylized choreography as well as a most basic humanistic struggle.

A second video, Neighbors 1 directs the viewer through a past exhibition. The characters of Schorr's small town, line the walls of a non-descript white room. Rather than the lush large- scale portraits Schorr is known for, the attentive yet restrained characters exist as Xerox copies. The viewer is literally led around the space, while standing still in the middle of the gallery.

This year, Collier Schorr's one-person exhibition "German Faces" opened at the Berardo Museum, Lisbon as part of Photo España, and will travel to CoCA Kronika, Bytom, Upper Silesia Poland as part of Ars Cameralis in November. Her work is also currently on view at the Museum of Modern Art in "Pictures by Women: A History of Modern Photography". In 2007-2008 she was a Guna S. Mundheim Fellow at the American Academy, Berlin. Other recent museum projects include curating "Freeway Balconies" at the Deustche Guggenheim, Berlin (2008), and holding solo exhibitions at Le Consortium, Dijon (2008), Villa Romana, Florence (2008), Badischer Kunstverein, Karlsruhe (2007), and the Museum of Contemporary Art, Denver (2007). Collier Schorr has been included in the recent exhibitions at Ellipse Foundation, Cascais, Wexner Center for the Arts, Columbus, OH, Los Angeles County Art Museum, Los Angeles, The National Museum of Women in the Arts, Washington DC, Guggenheim Museum, New York, Hartware Medienkunstverein, Dortmund, and Kunstwerke Berlin. Works appearing in "Journals & Notebooks" can be found in Volume 1 (Neighbors, 2007) and Volume 2 (Blumen, 2009) of Forests & Fields, published by SteidlMack.
www.303gallery.com