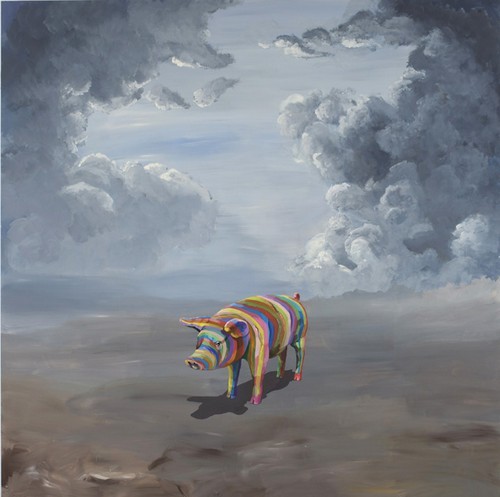 303 Gallery is proud to present our first exhibition of paintings by Djordje Ozbolt.

Ozbolt’s figurative works are influenced by the ideologies and histories of Southern Europe, United Kingdom and India. The paintings merge varied world views that are humorous, slightly disquieting and offer wry commentaries on the paths our lives have taken, often injected with a curiously unflinching optimism.
Rendered with an eye toward surrealist fantasy, “Be Curious” finds a young man in a Garden of Eden style landscape, sharing a tender gaze with a vacuous monkey. He takes the place of the venerable “Stranger in a Strange Land,” the awkwardness with which he interacts with his lush landscape and animal friends allegorically referencing the viewer’s connection to his own environment. Along with the boy’s tender nudity, the vulnerability one feels when trying to find his way in the world is exaggerated by the title’s obvious play on sexual norms.
Working from a capricious grasp on history, Ozbolt imagines a meeting between Nazi soliders and an eastern spiritual guru in “Under a Banyan Tree.” Slowly coercing the soldiers into a new kind of peace, the guru orates to the soldiers, who are intensely focused and in various stages of shedding their military paraphernalia. Appealing to our most deeply-rooted feelings of malevolence, the guru is beseeching the soldiers and, in turn himself, to never give up hope and to embrace the necessary patience it takes to come to terms with who we might be.
Applying the idealism of fantasy to both timeless and expressly modern scenarios, Ozbolt’s paintings proffer an unspecific yet eminently applicable take on the modern world; nature, thought and the nature of thought harmonizing as if supernaturally linked.
Djordje Ozbolt has had his work was included in the Tate Triennial, London; “5000 Years of Modern Art – Painting, Smoking, Eating”, Villa Merkel, Esslingen, Germany; and the Prague Binennial. This past May, he collaborated with Peter Coffin for a special exhibition at Herald Street in London.
www.303gallery.com