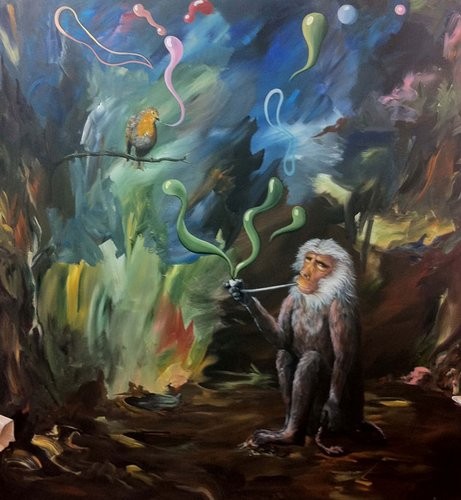 303 Gallery is proud to present our second exhibition of paintings by Djordje Ozbolt.

Djordje Ozbolt's latest grouping of paintings, with their distinctly surrealist styles and mythological referents, seem to reinvigorate the spirit of the painter as supernatural channeler of history. His imagined scenes acknowledge the peculiar arrangement of the modern world, as absurdist intervention overlaps with humanist tendencies and primeval emotion. In "Offering," 2010, a seraphic village woman in traditional garb makes a sacrifice of a bird with talons made of flowers and a rosary made of Vienna sausages. These talismans seem to imply a sort of confused desperation, as if this woman is caught trying to cover all bases so completely that her offerings become foolishly incongruous. As an illustration of the futility of the search for unimpeded communication (with each other, with nature, or with the spirit world), Ozbolt implies that perhaps the impositions of the modern age are not entirely to blame for the seemingly delirious nature of society.

In "Portrait of a Noble Bubbleman," based loosely on Picasso's "Portrait of Sabartes," Ozbolt envisions his subject in a perpetual state of slow disappearance. With a face made exclusively of bubbles on the point of explosion, the Bubble Man is allegorically exposed as a fragile, shifting being. This attention to the fluctuating nature of time seems to hint again at confronting the challenges of history in the painter's practice. Using the whimsical trope of the bubble to represent the most delicate and unrepresentable of features, Ozbolt is able to cast a sideways glance at the notion of authoritative portraiture. Similarly, "King Solomon" turns the mythology of the Israelite King on its head, as he is represented via the emblem of the African mask. As the wooer of Ethiopian Queen Sheba, Solomon occupies a trenchantly different space in African mythology than in the typical Western view. By painting Solomon wth Africa-shaped glasses in a mask form, Ozbolt asks the viewer to question the subjectivity of mythology, as well as elucidating questions of authenticity and morals.

Djordje Ozbolt has had his work included in the Tate Triennial, London; "5000 Years of Modern Art - Painting, Smoking, Eating", Villa Merkel, Esslingen, Germany; "The Library of Babel / In and Out of Place. 176 Zabludowicz Collection", London; and the Prague Binennial. A catalogue of the artist's work is forthcoming from JRP | Ringier.
www.303gallery.com