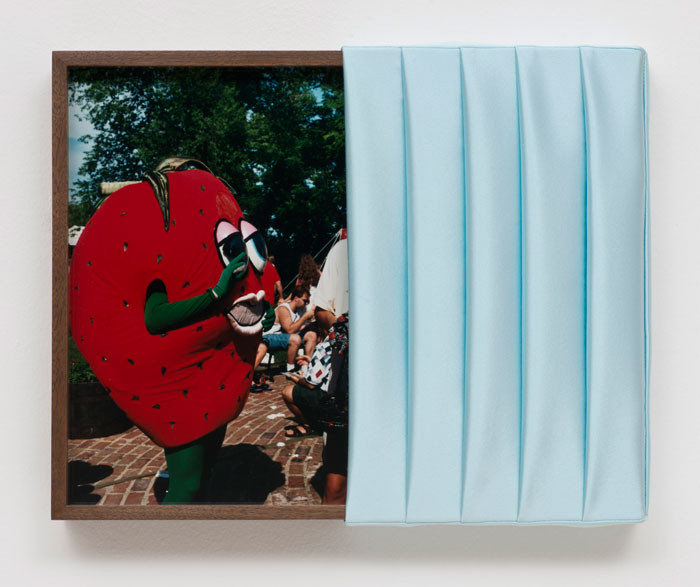 303 Gallery is pleased to present our first exhibition of Elad Lassry's new work.

What is the philosophical location of a picture? Working with images culled from advertising, films, illustrated magazines, and commercial catalogues, Lassry lifts them out of their original contexts, alters them, and radically destabilizes their function. He not only points to the processes of photographic production and reproduction (underscoring the idea that a picture de facto relates to other pictures), but also to the material attributes of the picture as an object. In his rigorously formatted photographs, which never exceed the dimensions of a magazine page or spread, Lassry elaborates on the potential of a photograph to exist as a sculpture. Often displayed in frames that derive their saturated colors from the dominant hues in the pictures, or more recently featuring pleated sheets of 4-ply silk affixed to the frame, his works "stretch" the concept of image-making. Taken as a whole, Lassry's works create an archive of significations, of images that critically investigate other images, which leads to more elastic ways of articulating representation.

Over the last several years, Lassry has distinguished himself as an outstanding thinker and experimenter within the expanded field of contemporary art. Mining the relationship between traditional modes of analogue production and digital intervention within an unprecedented "blitz" of image proliferation, Lassry has creatively reassessed what it means to make pictures in the post-photographic age. His image-driven, interdisciplinary practice-including photographs, films, sculptures, performances and site-interventions-is positioned within an art historical genealogy that taps the readymade, post-appropriative practices, structuralist filmmaking and relational modes of exhibition display.