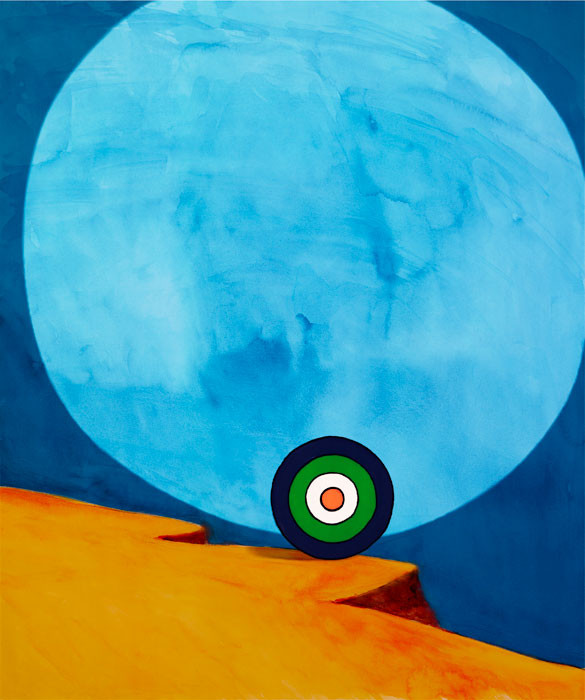 303 Gallery is proud to present our third exhibition of new work by Florian Maier-Aichen.

With the works in this exhibition, Maier-Aichen continues his practice of picking apart and expanding notions of photographic representation. Many works in the show rely on a fully hybrid model of image production; utilizing practices of photography, painting and drawing in equal measures has allowed the artist to explore the myth of image-making in pursuit of a new form of the ideal photographic document. "Aus Ven [From Hven] ," an image of the island of Hven in the Öresund sound, filters the explicit tropes of typical landscape imagery (clear skies, fertile fields, blue ocean) through the perspective of hard-edged abstraction. In "La Brea Avenue in the Snow," Maier-Aichen uses historical photography as reference material to create a fairytale scene of a snowy day in Los Angeles. A paean to timelessness, it is also an investigation of the photograph as creator of nostalgia for the inexistent.

In two images titled "Der Spaziergang," Maier-Aichen uses the animation technique of drawing on trasparent cells, combines the cells with watercolors, and photographs them. The minimalist characters in the image are not figurative, but reside in movie set-like western landscapes, seemingly remnants from another place and time. In two images titled "Österjon" (I and II), the artist again references minimalism, as abstract paintings referencing the work of Kenneth Noland are seen floating in bodies of water, functioning as landscapes. By visually flooding the artworks with the natural phenomenon of rippling water, Maier-Aichen is able to reify the notion of material destruction at the hands of nature and turn the paintings into a different kind of venerated object - nature's cousins. Through subtle interventions and a shrewd utilization of the visual / conceptual crossover, the works push toward a simultaenous rejection and embrace of the confines of photographic reality, all the while celebrating the romance of image creation.

Florian Maier-Aichen has had solo exhibitions at the Museum of Contemporary Art, Los Angeles in 2007 and at the Museo Thyseen-Bornemisza as a part of Photo España, 2008. Each of these exhibitions was accompanied with a fully illustrated catalogue. Maier-Aichen was featured in the most recent season (2009) of PBS's award winning series Art21. His work has been included in numerous exhibitions internationally including the 2006 Whitney Biennial, exhibitions at the Hammer Museum Los Angeles, CA, Blaffer Gallery, Art Museum of the University of Houston, Texas, Parrish and Grey Gallery, New York, FLAG Art Foundation, New York, Saatchi Gallery / Royal Academy of Arts, London UK and others. Maier-Aichen lives and works in Cologne, Germany and Los Angeles, California.