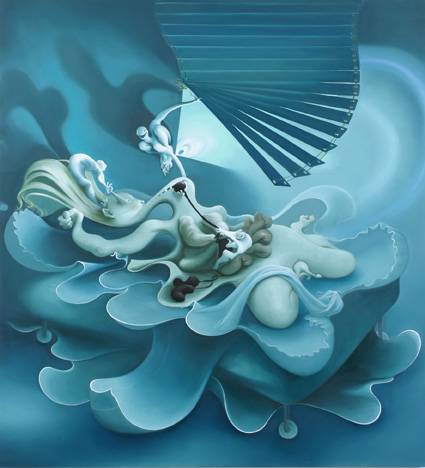 303 Gallery presents new paintings by Inka Essenhigh. Inka Essenhigh’s figurative abstractions amplify banal moments of everyday life, transforming small exchanges into charged narratives. In “Spring” 2006 a tiny figure is walking briskly through an oversized forest. The environment is dense with grass, trees, vines, and wildlife at dusk. Lush green leaves and dark pink buds and flowers are described in great detail. Essenhigh’s exaggerated sense of nature has evolved out of her painting process, which is an intuitive mix of memory, contemporary media and art historical influences.

The characters and events in Inka Essenhigh’s paintings are depicted in ways that would never be experienced in reality. In her work, motion takes on solidity and objects become permeable. “In Bed”, 2005, shows a reclining female figure enveloped in sheets floating around her bed that almost inhale and exhale while she tries to sleep. Demon-like creatures represent the woman’s anxieties as another day begins.

In “Subway”, 2005, a male figure rushes down a set of stairs and into a subway car, pushing people out of his way as they exit the train. The outer layers of subway cars have melted away. A white form traces the gentleman’s trajectory, evoking a blur similar to that seen in long exposed photographs.

This past summer Inka Essenhigh had a solo exhibition at the Salamanca Cuidad de Cultura Fundación Municipal, in Salamanca, Spain, with a catalogue including a text by Laura Hoptman. Since 2003, the artist has also had one-person exhibitions at Sint- Luks Galerie, Brussels, Belgium, The Museum of Contemporary Art, Miami, FL, as well as at the Fruitmarket Gallery in Edinburgh, Scotland. In 2004, Essenhigh was also included in the Biennial de Sao Paulo, Brazil, as well as the SITE Santa Fe Biennial, Santa Fe, New Mexico. Next year, her work will be included in the “Triumph of Painting, Part 3”, at the Saatchi Gallery, London, with a catalogue.