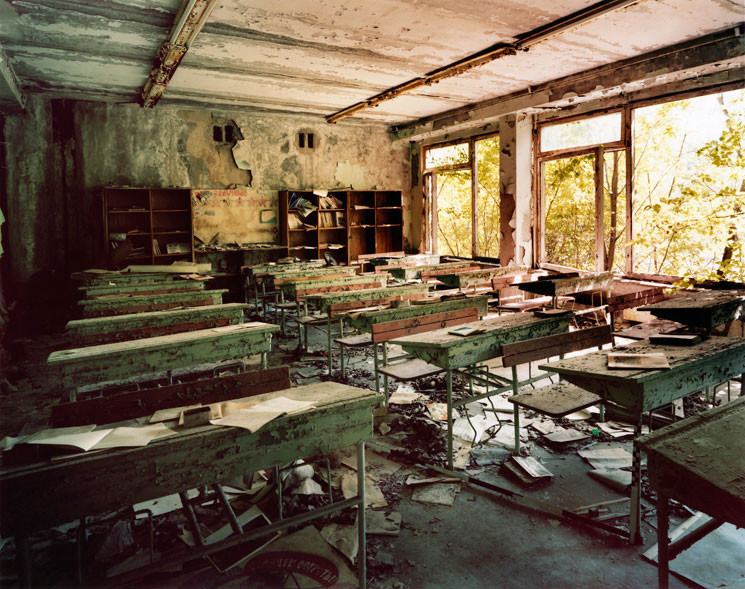 Jane & Louise Wilson's fifth exhibition at 303 Gallery will mark the first time that they bring several bodies of work together: the photographs "Atomgrad, Nature Abhors A Vacuum" I, V, VI, VII and VIII, 2011; and "Blind Landing, H-Bomb Test Facility", Lab 1 and Lab 4, 2012. In the 'Atomgrad' series, the Wilsons photographed in the town of Pripyat, built in the early 1970s under the former Soviet Union to house the Chernobyl factory workers. Known as Atomgrad (Atom City), the town has lain abandoned and contaminated for the last 25 years. 'Blind Landing' documents the Wilsons' first publicly sited installation, on a former H-Bomb test facility on Orford Ness, an island off the Suffolk Coast owned by the Ministry of Defense.

The large aluminium cast sculptures "Blind Landing" Lab 1 and Lab 4, 2012, were installed in the H-bomb test labs on Orford Ness. Siting literal measures, the Wilsons used yardsticks to act as a register for scale and intimacy. The measures are cast in aluminum, painted with individual black and white markers. The vertical uprights challenge our sense of scale and ruin, pointing to an architecture of forensics and camouflage. The Yardsticks are obsolete measures, because of their imperial standard: the yard (0.9144 of a metre), 36 inches. (The inch is the basis of the British imperial system of measurement.) 'Man', 'antiquity', 'empire' - all obsolete measures. Obsolete and therefore subject to monumentalization.

In the 'Atomgrad' photographs, a wooden yardstick measure is physically placed in each interior, here acting more as a readymade. The recurring motif of a yardstick signals a desire to make conscious the act of entering and photographing these spaces. The photograph encourages us to stare back into the past, into the empty manmade spaces, yet the yardsticks (a means of measurement now fallen into disuse, much like the buildings themselves) play with memory on material fact, on that which had been recorded, measured, articulated and analyzed, for levels of radiation. The work explores the thematics of dark tourism, using the yardsticks as a forensic and literal measure that act as a register for the viewer.

"Altogether", 2010, is based on a photograph of a hanging spatial construction in Liubov Popova's studio by Aleksandr Rodchenko from 1924. It is comprised of 52 yard measures. Drawing attention to the various qualities of this internal architecture, "Altogether", does not evoke the sculptural tradition so much as Mel Bochner's 1969 'Measurement Room' or the Polish artist Edward Krasinski's Intervention series (1969-70). In which Bochner's and Krasinski's lines mark the alienation of measure from the measurer.

Also on view will be "Konvas Automat", a cast of the 35mm Russian Bolex camera, the same model of camera used by the Ukrainian film maker Vladimir Shevchenko who made the seminal film "Chernobyl: A Chronicle of Difficult Weeks" in the days immediately following the disaster. This film is an extraordinary, close-up record of the efforts to contain and clear up the disaster but it is also a compelling document of the physical effects of radiation on film. When Shevchenko first processed his film he noticed that portions of it were heavily pockmarked and affected by static interference. He mistakenly thought that this interference was caused by faulty film stock, however when he subsequently played the film back on a Steinbeck, he heard sound alongside the image and realized that each time the image deteriorated, it coincided with the sound of the Geiger counter. So there was no fault with the processing... Shevchenko had captured the effect of radiation on film, for the first time. Caroline Wilkinson a Professor of Craniofacial Identification at the Centre of Anatomy and Human Identification, University of Dundee comments, "The idea of a radioactive forensic film and camera is also fascinating - that the moment and the event are captured in time as a process as well as an image is the ultimate forensic experience."

Jane and Louise Wilson were born in Newcastle received their MAs at Goldsmiths College of Art, London. They began working together in 1989 and since then have exhibited at major galleries internationally. They were nominated for the Turner Prize in 1999. Recent solo exhibitions include Whitworth Art Gallery, Manchester; Dundee Contemporary Arts, Dundee, UK; Helga de Alvear, Madrid; the British Film Institute Gallery, London; and Musee d'Art Contemporain de Montreal. They are currently included in the exhibition "Stanley Kubrick" at the Los Angeles County Museum of Art. The artists live and work in London.