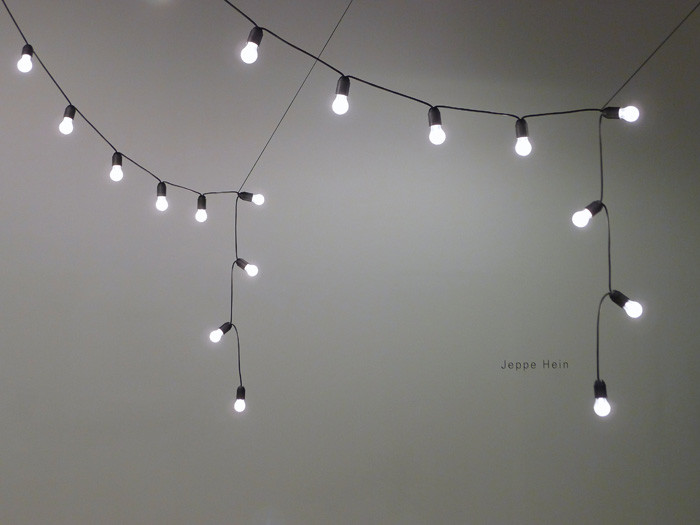 303 Gallery is proud to present our second exhibition of new work by Jeppe Hein.

Outside the gallery, the lens of a telescope beckons viewers to peer inside the gallery space. By looking into the telescope's lens, viewers become aware that the expected panoramic view will be satisfied in the figurative sense only. "Upside Down" subverts the expected view by reflecting the gallery space turned upside down. Viewers will step back surprised and take a closer look through the gallery's window without the telescope again in order to find out what they seem to have overlooked with the naked eye. This allegorical play on the constant dialogue between expectation and vision, truth and imagery is also extrapolated through "With Your Own Eyes," a hole in the gallery wall through which a viewer will see a reflection of his own eye rather than a voyeuristc view through a private space inside the gallery.

For "360o Gallery Photo Edition," Hein has created a mechanism that exposes images in exact 15 degree intervals throughout a 360 degree cycle. Photographing the gallery space in its empty state and creating a printed document of the results, the viewer is able to take a mathematical stock of the precise space he is an at any given moment. Removing any trace of the sacrosanct notion of the art institution as a consecrated space, Hein seems to embrace the minimalist ideal of arbitrary definitiveness. "Light Pavilion," several chains of light bulbs hang down from the ceiling on strings. When visitors enter the space the light chains slowly move upwards. After a short period of time, an accessible pavilion of light chains appears that slowly sinks down again. Visitors exploring the back room are suddenly facing a member of the gallery staff pedalling on an exercise bike, the source of the kinetic energy which animates the light itself. Again upending the notion of art's supernatural power, Hein breaks down the wall between creator and spectator, and the artistic process itself is sidestepped in favor of collective experience.