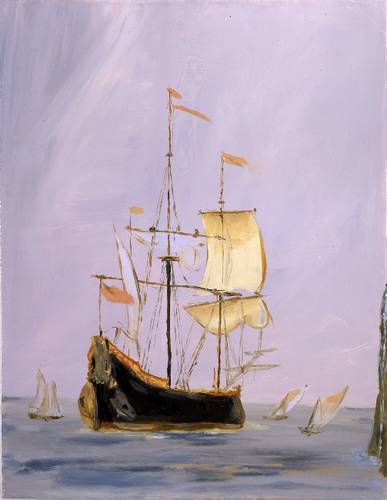 303 Gallery presents our seventh exhibition of work by Karen Kilmnik. This exhibition will revolve around two installations of architectural structures as well as paintings and drawings. Along with
a video installation, these elements synergize Kilimnik's interest in historical, literary and aesthetic features of a romanticized past.

A Napoleonic campaign tent will be recreated as the point of convergence for Kilimnik’s paintings and drawings that utilize multiple disparate references and oracular power to create imagined scenarios. The painting "the poor cottage girl at the Musée Grevin wax museum on a hot summer day" , for example, fogs the notion of the verifiable, while "the girl in the pearl earring in Shakespeare's cottage" uses a contemporary icon to recapitulate a conventional relationship to
an earlier period in time.

In the rear gallery, Kilimnik has installed an architectural folly, based on those found in parks or estates in Europe in the 17th and 18th centuries. This structure houses her film “The bluebird in the forest” which is a collage of miniature ballerinas dancing throughout a colossal wooded area. Kilimnik's use of theatrical and set techniques expands on her painting and sculptural/installation practice, that began in the early 1990's.

Karen Kilimnik, who has been exhibiting with 303 Gallery since 1990, will have one person exhibition at the Musee d'Art Moderne de la Ville de Paris, France in October 2006. In 2007, the Institute of Contemporary Art, Philadelphia will present a mid-career retrospective of Kilimnik’s work that will travel to the Museum of Contemporary Art, Chicago, and Aspen Museum of Art, CO. Also in 2007, Kilimink will have a one-person exhibition at Le Consortium, in Dijon, France. Over the past 16 Years, Kilimnik exhibited internationally, last year at the Fondazione Bevilacqua La Masa, Venice, Italy, during the Venice Biennial, and at the Haus zum Kirschgarten, Historisches Museum Basel, Switzerland. An artist book published by Patrick Frey was created for the Haus zum Kirschgarten, and catalogues of the Bevilacqua La Masa exhibition included texts by Angela Vetesse and Caoimhin Mac Giolla Leith. Kilimnik has also published a book of her Paintings and another of her Drawings with essays by Patrick Frey.

303 Gallery is open Tuesday-Saturday from 10 am - 6 pm. For further information please visit us at www.303gallery.com or contact Lisa Spellman or Mari Spirito.