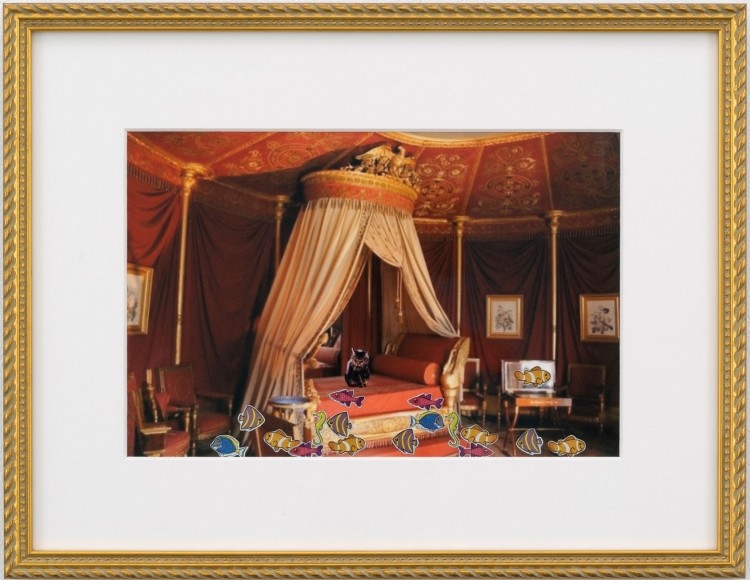 303 Gallery is pleased to present Karen Kilimnik’s eleventh exhibition at 303 Gallery and her first solo presentation in New York since 2011.

In new paintings and collages, Kilimnik creates richly enigmatic narratives, inscribing her images with signifiers that obliquely reference histories of representation and myth. In two new paintings, “going off to the Battle” tapestry - off to a glittering start and a sketchy start - "going off to the battle” tapestry, Kilimnik mines the vernacular of tapestry reproductions of Baroque and Renaissance painting imagery. Embracing the prosaic nature of these classical scenes with happy aplomb, Kilimnik doubles down on the expressive potential of the reproduction, rendering her scenes with patchy brushwork and sprinkling her finished paintings with glitter. In another new painting, the sea monster decides to make itself at home in the palace of a river or god of the sea-by piero bonifazio ALGIERI- 1740s, paris underground river, ballet or theatrical stage scenery becomes a point of departure, as the fanciful world of illusion begets a delicate new form of realism. Removed from but still reverent of their original source material, the paintings glow with new life, Kilimnik’s way of looking not only backward to look forward, but of transmitting her own fascination with the exegesis of legend.

An intuitive sense of the potential of reference suffuses Kilimnik's work, with unexpectedly evocative notions introduced into art-historical scenarios simultaneously fantastical and plebeian. A selection of new collages continues to use tapestries as portals to enchanted worlds, the majority rendered from classical landscape paintings. Details of these tapestries are adorned with selections culled from from Kilimnik’s library of idiomatic imagery: cats, birds, butterflies perfume bottles, flower and fruit arrangements. In secret meeting of the generals, a cabal of cats sits among the ornate furniture and renaissance paintings of an antechamber of Old Europe. The perfumed forest conceives of a hidden natural world imbued with the scent and promise of Penhaligon’s Bluebell perfume, itself a distillation of a woodland dreamscape of moss and wildflowers. Building these layers of reference into spellbinding narratives, Kilimnik has created her own universe of referents, an extraordinary journey through a composed world that is entirely sui generis. Whether painting an imagined image of Velazquez’s earthenware pottery in DaVinci’s dining room or adding perfume bottles to a Royal Legionnaire’s coat of arms, Kilimnik's ability to tease the sublime into unexpectedly mellifluous shapes remains the most joyfully contagious tenet of her practice.