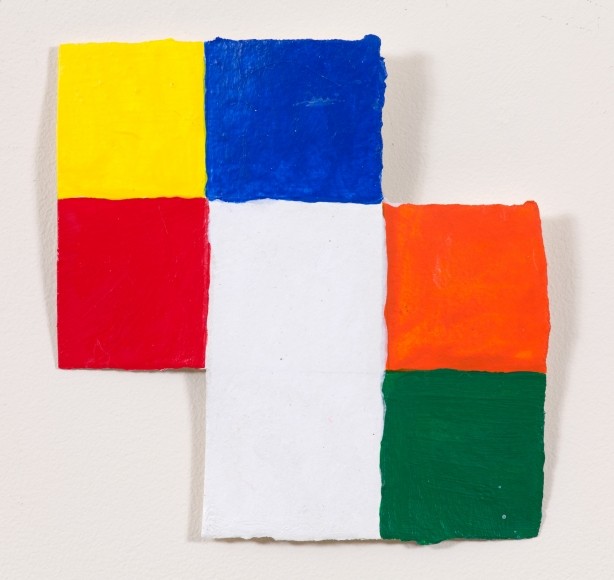 303 Gallery is proud to present new works by Mary Heilmann. On view will be an arrangement of paintings on canvas and handmade paper, glazed ceramics, and a group of her distinctive furniture sculptures. Heilmann has exhibited with 303 Gallery since 2004.

Wryly poking around the history of abstract painting from both within and without it, Heilmann’s imaginative approach to the geometries of spaces, things, and thoughts has made her one of the foremost painters of her generation. Adopting waves and roads as inspiration for many of the works in this show, Heilmann’s deft perceptive logics suggest simultaneously intimate and expansive experiences.

In Heilmann’s paintings, waves and roads each generate their own sources of life. They move and travel and interlock. Positive and negative space inhabit alternating roles, as colors riff on memory in vibrant undulations as well as protracted expanses. Heilmann’s geometrics abut forms and steer the eye backward between them and seemingly through them. In San Andreas (2012), a glowing red core pokes through chunks of earthy green glazed ceramic, its tactile surface bubbling with tension. In The Geometry of a Wave, a tiny painting on paper suggests an entire universe in two colors. Pigment pools in the paper’s irregular crevices, as a wave’s fragile surface is rendered with a penetrating directness.

In his memoir Barbarian Days, William Finnegan writes of the hallucinatory power of surfing, “It was as if we were suspended above the reef, floating on a cushion of nothing . . . Approaching waves were like optical illusions.” Heilmann’s own waves begin to depict a similar imagery with their synchronic positives and negatives. What seems like a simple gestural game drifts into the essential, into an intuitive understanding of a form’s resonance and a furtive ability to shape it.

To that end, Heilmann’s installation of her signature chairs encourages viewers to sit, linger and engage in dialogue with the paintings, with each other, and with themselves. To sit and watch the waves, to hit the road. The edges of the paintings point at each other; one can imagine the air between them as tactile. If a painting has its own language, why not try to speak with it?

Mary Heilmann’s work has been shown in prestigious international venues since the early 1970s. A major solo presentation of her work will be held at London’s Whitechapel Gallery in 2016. In 2007-2009, a retrospective traveled from the Orange County Museum of Art to New York’s New Museum of Contemporary Art, with stops at Contemporary Arts Museum, Houston and the Wexner Center for the Arts, Columbus. An exhibition at Bonnefantenmuseum, Maastricht in 2012 traveled to Neues Museum, Nuremberg, while “Mary, Blinky, Yay,” with Blinky Palermo, was exhibited at Kunstmuseum Bonn in 2013. In 2015, “Two by Two, Mary Heilmann & David Reed” opened at the Hamburger Bahnhof in Berlin. A solo exhibition, ‘Sunset,’ was commissioned as part of the inauguration at the new Whitney Museum of American Art. Mary Hellmann lives and works in Bridgehampton and New York City.
www.303gallery.com