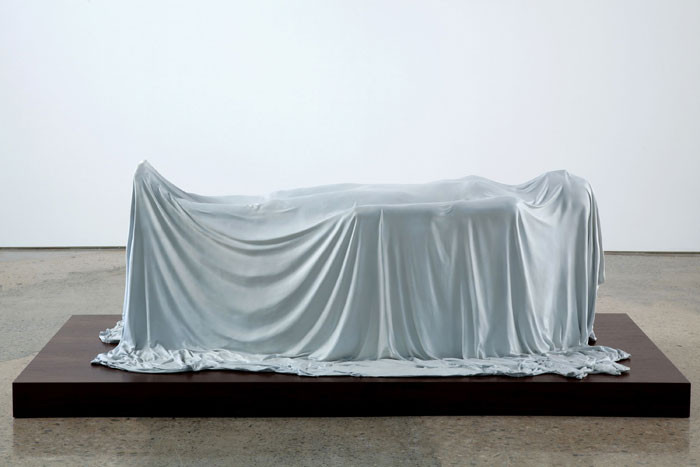 Working with traditional media including bronze, stone, wood, steel and aluminum, Johnson's work utilizes materials that are synonymous with strength, belying the delicate, sensuous, and sometimes weightless appearance of the sculptures themselves. Objects seem to be poised just so, however fragile in their disposition. The work focuses on the physical point at which an object, when standing on its own, becomes a sculpture. Notions of classicism abound, from bronze drapery, to polished marble as well as a kinship to wabi-sabi and mono no aware. The spirits inhabiting or occupying these objects are pushed to the forefront, often bringing into question exactly what the viewer is looking at.

In a sculpture titled "Wifebeater," the tank-top undershirt, referred to by its colloquial moniker, is cast in bronze, assuming an upright and present posture, slightly slumped in contrapposto and oddly animate, despite the shirt being absent its wearer. The piece was born of unintended consequence when the shirt, which was being used as a glue rag, was hung up to dry. When the tank top was released from its hanger it revealed its nature as a sculpture. The subsequent form was molded and cast.

Another form of sculptural displacement is explored in "Levitating Woman" as the illusion of the levitating magician's assistant is sculpturally performed. In this work the sheet covering the body is replaced with bronze, while the figure is missing. Johnson enshrines the presence of the woman within the topography of the sheet, creating a virtual figure that is both floating and not actually there. The sculpture reveals itself by the form of its cloak, in and of itself. With his unique use of the literal, figurative, and implicit, Johnson is able to slyly affect symbolic space through his singular sculptural interventions.