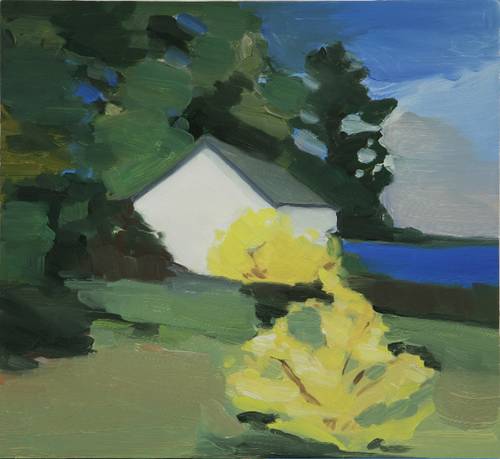 303 Gallery presents our fourth exhibition of paintings by Maureen Gallace.
Maureen Gallace's oil paintings have evolved out of the history of American landscape painting and out of her own conceptual rigor. Her intimate works on canvas and panel have become increasingly reductive and complex over the years.

Gallace's accounts take place in and around her hometown of rural Connecticut and family summer vacations on Cape Cod. "Winter, Easton, CT" 2006, is inhabited by three red barns in a snowy valley. The simple structures stand against dark blue mountains that give way to a rosy dawn sky. Gallace's paintings are rendered in deliberate, considered strokes, each of which is essential to holding the delicate light and space she has constructed. “Her spare landscapes trigger viewers’ thoughts and feelings more successfully through form and color and brushstroke than would a photographic transcription.” (Alan G. Artner, Chicago Tribune, July 7, 2006) Another painting, "Lake House with Forsythia" 2006, is of a tiny cottage in springtime with a flowering bush in the foreground about the same size as the building. This exhibition also includes paintings of empty summer beaches as well as an autumnal road, "Late November", 2005, bringing to mind the passing of seasons, years and other inescapable cycles.

This year Maureen Gallace had one person exhibition at The Art Institute of Chicago, Chicago, IL. In 2005 Gallace exhibited at the Chinati Foundation ins Marfa,TX, and the year before had a one person show at the Douglas Hyde Gallery, Trinity College in Dublin, Ireland. A catalogue with text by Rick Moody was published to accompany this exhibition. Previous one-person shows include the Dallas Museum of Art, TX in 2003, the Fukui City Art Museum, Japan in 2001 and the Museum Schloss-Hardenberg in Velbert, Germany in 1996. Gallace’s paintings are included in the collections of the Dallas Museum of Art, TX, Wadsworth Atheneum, the Fondazione Di Vignola, Italy and the Whitney Museum of American Art