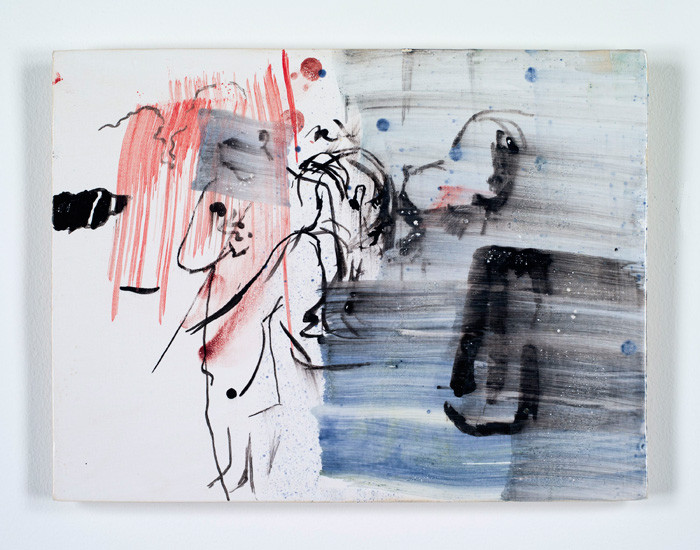 For his second solo exhibition at 303 Gallery, Nick Mauss presents a landscape of images and notations, drawn across various forms. Accumulations of large aluminum sheets painted white and silkscreened with enlargements of Mauss' drawings or snapshots from his personal archive articulate the experience of looking at something that you have seen, thought about, made, and finding it strange or alien, and working with this strangeness as a material. Like oversized leaves from a dented manuscript, the sheets heave, drape, and fold over one another, looped with tongues and cut-out windows that transfigure the images they support, ranging from the highly stylized rendering, to the prosaic: a mannequin hunched over a computer infiltrated by reflections of trees in the window; a rebus-like drawing of a crack, a chin resting on a hand, half of a sickle; a photograph of an archway modeled after an enlarged seashell; a drawing of a figure in a pose of supplication covered in a spattering of ink; a graphic frame enclosing white space; photographs of shadows of photographing hands and a camera held over sketches for dress designs; a floating dormant head suspended over a graphic ribbon hemmed in by a corner. Often the images stutter in repetition across multiple sheets, individually hand-colored or worked over, as if to correct, underscore, or elaborate.

Thinking in sliding picture constellations, Mauss takes images out of the air and puts them onto various carriers, formalizing a poetic language from drawing, to object, to syntax. The ceramic tablets and folded ribbons hovering on the wall have the viscosity and vibrancy of a thought just before it is formed into words. The space of the exhibition follows the same logic as the space of the drawing, disjointed drawings are used as plans for things to do in space. The mental rendering and the quivering gesture become irrepressible material, process becomes a kind of notional architecture.

Nick Mauss will be included in the 2012 Whitney Biennial. In conjunction with his recent solo exhibition at Midway Contemporary Art, Minneapolis, Mauss produced a catalogue with HIT-studio, Berlin, featuring a new texts by Mauss and by Michaela Eichwald. In addition, Mauss had a solo exhibition at FRAC Champagne-Ardenne in 2011, and was featured in group exhibitions at The Walker Art Center, Broadway 1602, Badischer Kunstverein, and 1857, Oslo. Mauss co-curated the 2011 White Columns Annual with Ken Okiishi and is currently a guest-professor in the department of Painting and Drawing at the Hochschule für Bildende Künste, Hamburg.