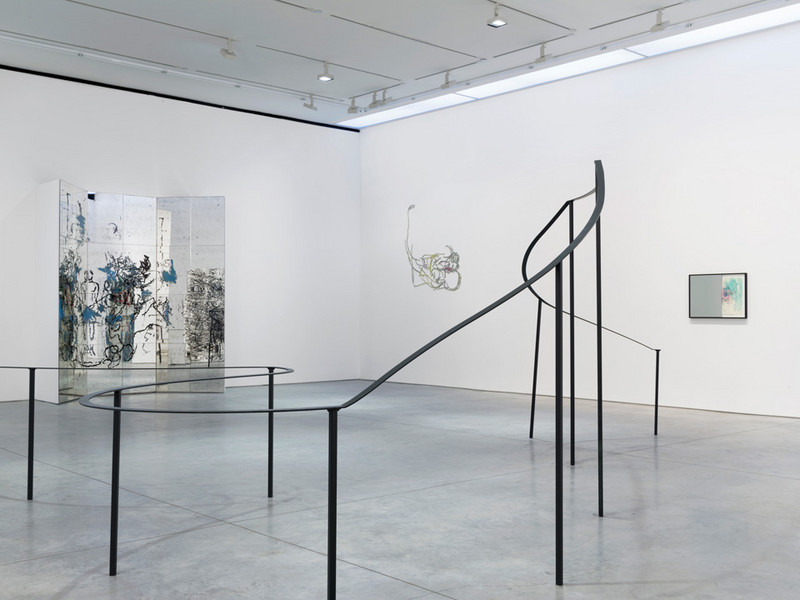 303 Gallery is pleased to present our third solo exhibition with Nick Mauss. For this exhibition, Mauss creates a mirrored garden in the gallery, in which his singular relationship to the line of drawing moves across and through space and mediums.

Mauss' work takes the mode of drawing, found at the interstices of various media, processes, and histories, and dilates, twists, folds, intensifies, and loosens those gaps to produce a different mode of making art.

Here, the viewer is guided into the exhibition by a serpentine railing, and upon arriving in the gallery space, finds a room shimmering in reflections and refractions of lines and forms. Mauss has been working in his own form of verre eglomisé for the past year, as he was developing a series of "intervals" within the Florine Stettheimer retrospective at the Lenbachhaus in Munich. The mirrored glass paintings have a way of puncturing the space--of giving the viewer the sense of being there and not being there at the same time. They also act--like Mauss' drawings in the past--as filters through which a wide net of sensibilities and art-historical rewirings are brought into the room. In a different material, Mauss takes lines and outputs them as body-sized steel filigree, which itself is drawn over again and again, in acrylic and pastel powder.

All of these individual works layer on top of and through each other, as Mauss orchestrates the space as he would a drawing on paper. For Mauss, the initial intimacy of the drawing is a tenuous and un-spoken wondering of the viewer, of objects, glances, forms and lines in a simultaneous process of formation and falling apart.

In 2014, Nick Mauss presented works within the Florine Stettheimer retrospective at the Lenbachhaus, Munich and in Portraits d'Intérieurs at Nouveau Musée National de Monaco. He also staged a performance, 1NVERS1ONS, working with the Northern Ballet and the National Youth Ballet, and the performance of texts and music by Kim Gordon and Juliana Huxtable, as part of Frieze Projects, London. An artist's book has been created to accompany this work. Mauss also presented a new piece as part of Art Basel Unlimited in 2014. Other recent solo presentations of his works were realized at Bergen Kunsthall, Norway (2014); Fiorucci Art Trust, London (2014); kim?, Riga (2012) and Indipendenza Studio, Rome (2012). Mauss was included in the Whitney Biennial in 2012 and Greater New York, MoMA PS1 in 2010, and has participated in group exhibitions at institutions including Kunsthaus Bregenz (2013); The Walker Art Center (2011); The Hessel Museum of Art, Bard Center for Curatorial Studies (2010); Kunsthalle Basel (2010); Kunsthalle Zurich (2009) and Le Magasin, Grenoble (2008). A launch of Nick Mauss and Ken Okiishi's Artist Web Project for the Dia Art Foundation is planned for April 16, 2015. Mauss lives and works in New York.
www.303gallery.com