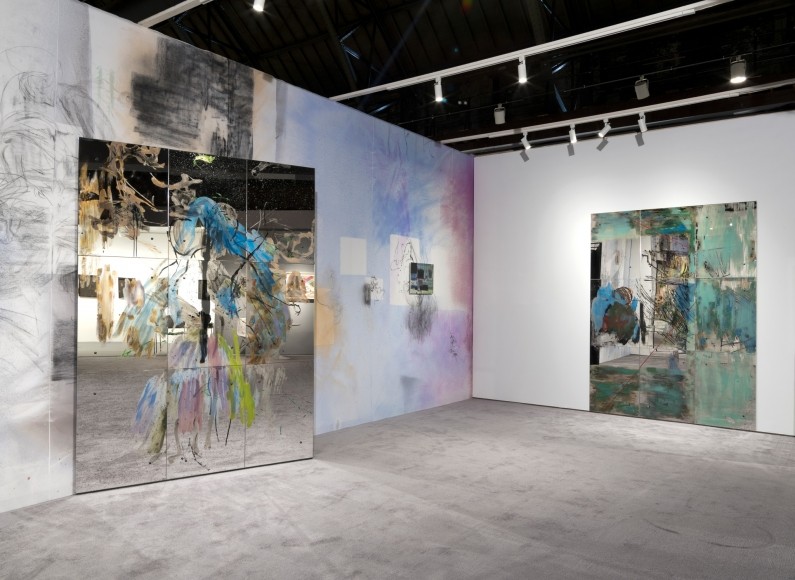 On this occasion, Mauss will present three reverse-glass-painted mirror murals, a large fabric wall drawing, works on paper, and ceramic plaques. Mauss’ mirror murals consist of sheets of glass painted backwards, mirrored, and spattered with acid, creating humming layers of visual interference between the act of looking and one's own reflection entangled in the image.

The largest wall of the booth is stretched in fabric drawn and painted on by the artist. This giant fabric, stitched together by vertical seams, also traffics in planes of interruption. Deliberately truncating rendered forms so that they break and reassemble into other areas of the tapestry, this purposeful subjugation of a complete legibility lends the work a temporal dimension, as images coalesce on an experiential stratum. Ceramic plaques and drawings hung on this ground echo motifs drawn onto the fabric itself, expressive graphic elements hovering and settling into a permanent mutability. One of Mauss’ large mirror murals is installed at an angle against this fabric wall, bringing it into oblique visual contact with the other murals, as well as stretching space and visual signals in unexpected ways.

Mauss’ work at The Art Show presupposes a litany of simultaneous perception, the futility of demarcation from one instant to the next. A tracing and a retracing that never completely unites, the viewer is forced to embrace the impossibility of finding an observational tabula rasa, of succumbing to concurrence.